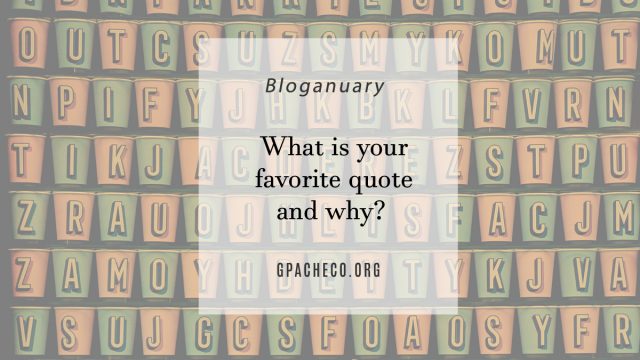 Asking a writer their favorite quote is probably the hardest inquiry they’ll ever receive.

“Never give up, never surrender” from Galaxy Quest (affiliate link) is probably top ten for me. There’s something so simplistic and catchy about it, yet it’s also layered.

Little Women (1994) is definitely a comfort movie for me. I love having it on in the background. The cast was stacked, and they were oozing chemistry. There are a lot of great quotes in it, but I identified with Jo heavily because she was a misfit and a writer. We were kindred souls, for sure. It also helped that Winona played her. I’ve always been drawn to her as a fan.

Well, of course Aunt March prefers Amy over me. Why shouldn’t she? I’m ugly and awkward and I always say the wrong things. I fly around throwing away perfectly good marriage proposals. I love our home, but I’m just so fitful and I can’t stand being here! I’m sorry, I’m sorry Marmee. There’s just something really wrong with me. I want to change, but I – I can’t. And I just know I’ll never fit in anywhere.

There was a part of me that wanted to run away as Jo did at this moment, just enjoying the world in that rare moment of time between childhood and marriage. Yet not want to leave because home is always home.

Since I’m leaning on movie quotes to answer this question, I might as well keep going.

I honestly didn’t understand that Penny had an abortion the first 100 times I watched Dirty Dancing (affiliate link). In my defense, I was literally four years old when it came out. Four-year-old me was in it for the music, the dancing, and the chemistry between Jennifer Grey and Patrick Swayze. I would legit turn my brain off for everything in between. OK?

We ordered it on Pay-Per-View and taped it as well so we could watch it over and over again. Eventually, I moved on to other movies. I stopped watching, but it was one of those movies from my childhood that had a special place in my heart. I’m fairly sure I rewatched it when it cycled through the movie channels in high school, and it dawned on me why they needed a doctor, why Penny was so ill after the procedure, and such.

It’s crazy how dark it is when you think about it.

But I like this quote because Baby lays it all out on the table. That night, the girl became a woman because she took a chance on Johnny and herself. There’s quiet feminism that gets almost overshadowed by the fact that she loses her virginity right after. Dancing gave her the tools to express herself at a time when she was known for being the baby of her family amidst the politics of the sixties and falling in love with someone she would never have known otherwise.