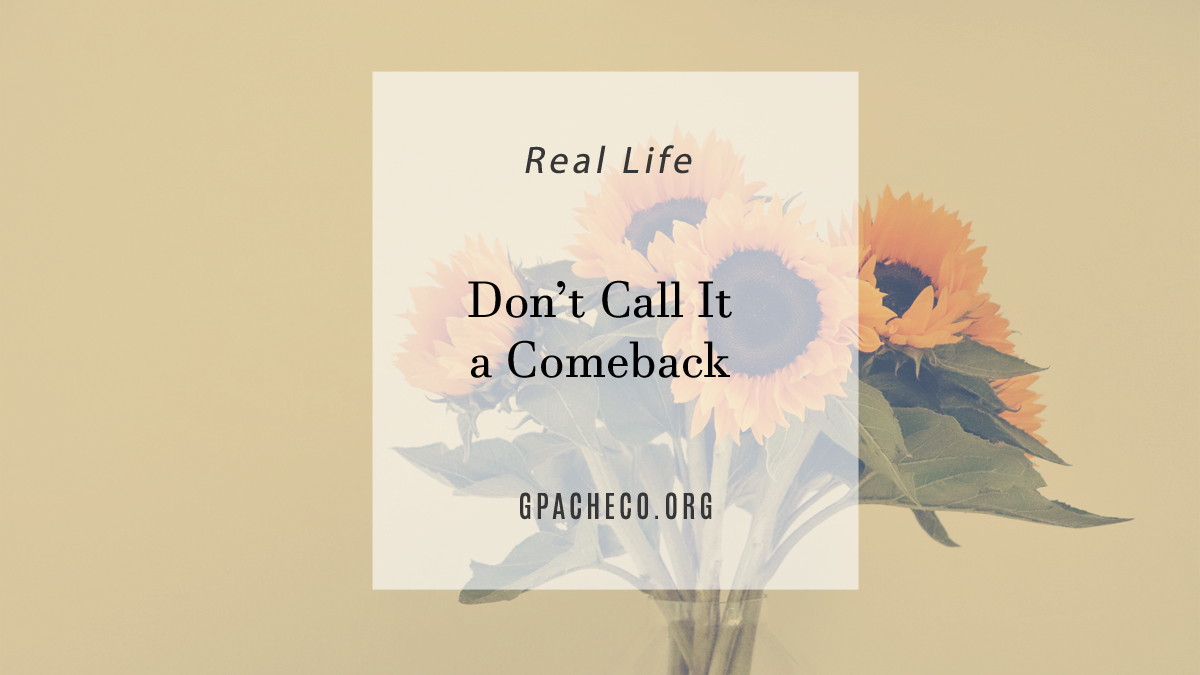 We’re more than halfway through 2022, and it has been a whirlwind of a rollercoaster for me.

And I’m still puking the aftermath.

When writing this draft, I resolved to spill the muscles and the ligaments of my heart into this specific entry to relieve myself of the bottled-up emotions that stink my footfalls every day. But I find that the unrelenting chokehold of my grief continues to be a sharp knife in my guts. Plus, we asked everyone who knows to keep it quiet on social media. It wouldn’t be right to violate our family embargo.

I will share that after an extended illness, my father – my superhero – passed away in April. Exactly two days later, I received a job offer from my current employer. Oh, and a couple of weeks after we buried him, my family caught the Omicron strain of Covid-19. Funny how life works out sometimes.

I’m rolling my eyes, in case you couldn’t tell.

There have been rays of light poking through. I wanted to be a writer, but I didn’t know what kind. I’ve realized over the years as a creative that people were more receptive to my poetry than anything else I’ve done.

One of the first haikus I ever wrote ended up in a district-wide anthology in elementary school. I didn’t even submit it. My teacher lowkey submitted it on my behalf.

I had no access to writing programs in school. If they existed, no one told me. I didn’t grow up in a well-funded school district. Or neighborhood, for that matter. And knowing my parents, they probably wouldn’t have let me join. I wasn’t allowed to participate in extracurricular activities because they always cost money we didn’t have, among other things.

When I got to high school, I realized that writers had joined the newspaper. That was our only outlet. I wrote some pieces during my senior year. But I had no control over rewrites, and whatever they published didn’t sound like me. I said forget it; I’m not doing this anymore. I would change my tune eventually, but at least now, I have more control over my voice.

I took an intro to a creative writing class for undergrad to test the waters. The teacher for that class helped us develop a short story that ended up being Requiem for a Bomb Shelter. Those same poems were featured in season 2, episode 17 of City of Writers. It was an early foray into what became my signature style: cinematic absurdism. But he also had us practice other creative forms. One unit was poetry, and we had to submit poems in the world we built in our stories. I received feedback that he immensely enjoyed my poetry more than the story.

So, I took a chance on myself, submitted a poetry packet for the 2022 Anaphora Arts residency, and was offered a place. Of course, I accepted!! It’s an immersive, virtual retreat where I can be amongst my people to hone my craft, receive mentorship, and network with people who work in publishing. I swore that when I started this journey, I would be a short fiction writer and wouldn’t settle for anything less. But sometimes, you must follow the signs the universe sends you.

So how have I been doing all this time? I have done the bare minimum to survive these past few months. I’m the mistress of compartmentalization, though. As soon as I clock in for work, I leave my pain at the door and retrieve the bag of sorrow when I close up shop for the day. As you can tell, one of the victims of my weaponized grief was maintaining the Writeropolis Industries network. But this thing I do is what brings me joy. I’m in control of the narrative, and I hope people come along for the ride.

I will not say that I will dive back in immediately and pretend that nothing’s happened. That’s not how it’s going to go down. I am going to move forward slowly, site by site. I plan to review every site in the network and refresh it. I want to take some time to incorporate actual SEO tactics, but we’ll see how that goes. Some of my sites don’t lend themselves to marketing as smoothly as others.

I’ve moved the poetry featured on City of Writers from Makata to its show notes.

I leave you with this thought. Remember how I wrote that in my family, butterflies are a sign from deceased loved ones that they’re thinking of you?

When I switched the paper calendar to July (I still use them faithfully), I instinctively looked at what day the 11th fell. It’s a Monday this year, in case you didn’t know. July 11 is my Daddy’s birthday. For further background, Jack is one of my dad’s favorite dogs that we’ve had in the family over the years.

Later that morning, Jack insisted on walking the entire neighborhood walking trail. I wasn’t in the mood (it’s a little more than 2 miles round-trip), but he refused to take the shorter trail home. When we came upon a corner, a white butterfly caught my eye. Butterflies aren’t something you see every day in the desert. It followed us for a little while, and my heart clenched.

“Hi Daddy, I miss you,” I whispered, hot tears in my eyes.

The butterfly took off in the opposite direction.

Say what you will, but those signs were unmistakable. My mental notation of the day his birthday fell this year, Jack refusing to go home when I wanted to, and a random white butterfly appearing in the exact spot we were. Maybe it would’ve shown up even if we hadn’t gone there, but how would I know? We would’ve been halfway home already.

So, I appreciate the people who have been with me on this journey, whether you were here from day one or just joined our regularly scheduled programming. I appreciate you more than you will ever know.

It’s been a long, strange trip, and I don’t regret a damn thing.

This is NOT the end.

This is the remix.