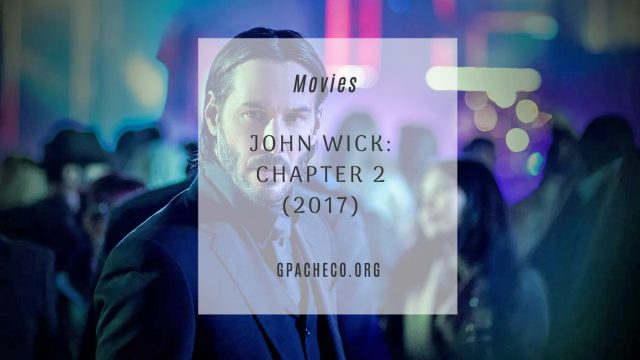 I thoroughly enjoyed the film. I knew exactly what to expect and got it. You can’t ask too much of any action/adventure film anymore. Say what you want about Keanu, but you cannot take your eyes off of him. I’m not saying that as a red-blooded woman. Keanu has that power over all of us, just saying.

I pulled up my OG review of John Wick. It wasn’t much of a review, so here is a snippet of my initial observations:

John Wick created a fun mythology that not a lot of films like to explore. Other films like to assume things from its audience, but John Wick remixed it and made it work. I like the idea that everybody knows everybody in the underworld, that there’s a hotel that caters specifically to assassins and there are guys that come out to clean up all the dead bodies. That was clever.

With Chapter 2, I feel they fleshed out my observations from the first movie and complicated it in a way that I predicted as it was unfolding. That’s not a bad thing at all.

But it is obvious how bare naked films have to be with their storytelling. They spoon feed it to you, which is a luxury with creative fiction. We don’t have that (but we should!).

However, I kept my eyes peeled because there were doubts in my storyteller’s head about how they would explain away my doubts. But they did it.

What rounded out Chapter 2 for me was the relationships John has with everyone – Santino, Winston, Cassian, Gianna, and the Bowery King, to name a few. The movie made their interactions intriguing to me and kept me emotionally invested. Of course, you don’t expect cold-blooded killers to have such deep-seated relationships with their wards, but the mythology of John Wick gives us that.

They didn’t dwell too long on these relationships, and without saying much, you immediately understood what was going on and why there isn’t just one side to the story.

Winston has set forth only two rules they have to follow with all these complicated relationships and mythology. So, of course, someone is going to have to break them. Several people over the course of two hours!

Not many spoilers from me today, but I am ready for Chapter 3. No place is safe. Maybe that’s what Chapter 3‘s byline will be: John Wick: Chapter 3: IN SPACE.

As you can tell, I wrote this before we discovered the actual title was John Wick: Chapter 3: Parabellum.

He showed me his fantastic library first, and that helped me warm to him a little. A guy with a room like that in his house couldn't be all bad. Octavia Butler