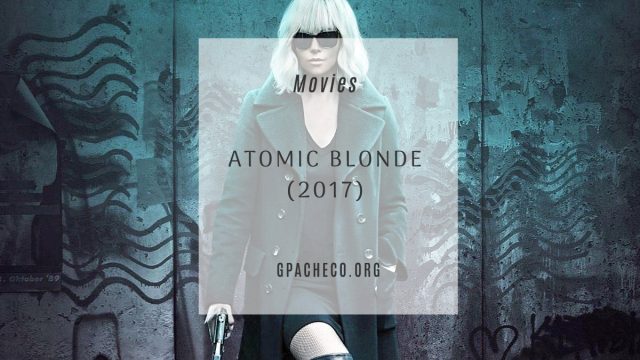 Atomic Blonde is a thrill ride.

The movie takes place amid the fall of the Berlin Wall, but the filmmakers embraced The Coldest City (paid link) graphic novel source material full force. They played it close to its comic book roots rather than relying on reality. I was six when it came down, but I legit remember when and where I was when the Wall fell. But the way Charlize filled every frame, the way James McAvoy chewed the scenery, the way they lit it had the aroma of a comic book panel. Every frame is a painting. I liked that.

The sets they used for the late 80s Berlin felt so fake, but they made that world work in a good way. So, props to the filmmakers for embracing that. So many movies based on graphic novels (Scott Pilgrim vs. the World nailed that comic book-y world, too) take the cinematic elements of the source material and try to put it in the real world. The filmmakers didn’t do that with this movie, and it worked well. I was impressed. You never once forgot that you were watching a real-life comic book.

The fight training was heavily grounded in reality, though Charlize said that she never full-on punches anybody during the press tour. Instead, she uses objects to take the brunt of her power. If she were to full force sock it to somebody, she risked shattering her whole hand. It was comical the way she used some of the objects. You’ll never use your car keys the same way again.

As far as the writing goes, I enjoyed the subversion of the spy trope. It’s always spy vs. spy when it comes to stories in that world, but it’s spy vs. spy vs. spy vs. spy. But it’s not in a straight line, someone is playing someone else, who’s playing the first person, but then there’s this dude disguised as another dude. I loved it.

The director of John Wick: Chapter I bowed out of Chapter 2 to develop this picture. Keanu ended up training for Chapter 2 alongside Charlize since they were filming concurrently, and they go way back. There were rumors that they would try for a crossover with John Wick, and I thought that was a great idea because I love Keanu and Charlize’s chemistry.

But after seeing Atomic Blonde, it doesn’t make logistical sense. They don’t even take place simultaneously unless they introduce some time travel plot device, and I will scream bloody murder if they try. They both work in their own respective, stand-alone worlds. What is up with a pop culture where everything has to crossover nowadays? This opinion is coming from a Marvel fan who wants the film series to acknowledge the TV series somehow.

Now to my complaints. I’m probably the only person this affected, but music is a massive part of the movie-going experience. It should enhance the movie, not take people out of it. You hear the Funeral March of a Marionette, and you immediately think of Alfred Hitchcock. That’s just how it is.

I wish they would’ve called me to help with the soundtrack because they did what Watchmen did. But, unfortunately, they relied on songs reminiscent of the time rather than actual charted songs from the year the movie takes place: November 1989.

They were the ones I recognized that I could recall. I’m pretty sure I heard a Clash song, but I could be projecting. 1988’s Father Figure by George Michael gets a pass, only because it’s marginally close to the date. But, I went back to check Billboard Year-End Hot 100 singles of 1989, and aesthetically, none of these songs would have worked for the era of the movie. So, they get a pass for the marginally accurate soundtrack. But, not much.

Warning: everything saved will be lost. Wii notification