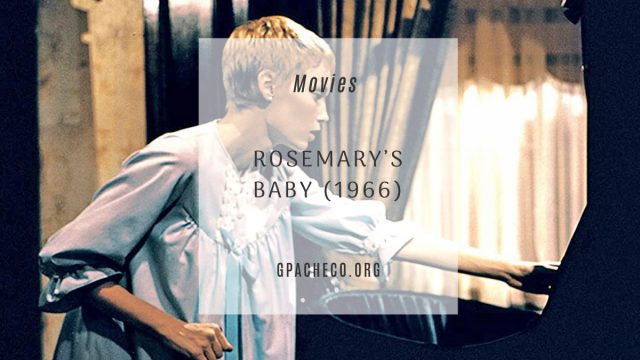 Rosemary’s Baby is a movie everyone assumes you’ve seen if you claim to be a student of film. I don’t think I’ve ever discussed it in casual conversation. I spoiled myself silly years ago because of random Wiki surfing. However, I never deigned to sit down & watch it until my 31 Days of Fear inaugural film festival.

I won’t say much from a film-making perspective. No point in rehashing what the critics have said. Most likely I would end up agreeing with them. It plays well and isn’t terribly dated. Apparently, it was a faithful adaptation. I won’t mention its director either, all things considered.

From a feminist perspective, I think it’s a powerful film that preys on a woman’s worst fear: the ownership of our bodies. They are used to create life. We are biologically created to carry a child to term, whether it actually happens or not. Who truly knows what kind of life we’re creating? Will the kid be evil, will it be a saint? We simply don’t know. We’re vessels. We have to trust in whatever higher power – if we believe in that sort of thing – that the child we created will be okay from beginning to end.

The destruction of Rosemary is a fascinating story as it unfolds. From the horrible night that she conceived to the actual birth drives home what feminism has been fighting for since the beginning of consciousness: my body is my own. We shouldn’t have to fear its use for demonic purposes, for political gain, or anything of that sort. We shouldn’t have to fear it at all. It shouldn’t be a weapon. It should simply be allowed to be without labels, without laws, without borders.

A young mother fears for her life during her first pregnancy, one that she didn’t have any say in from conception. No one wants to hear what she has to say about her body. She knows something is wrong: the cravings are unusual, she is losing weight and has become sickly pale. You’ve got a male obstetrician who refuses to address your concerns, and your husband refuses to agree to a second opinion and seems entirely wrapped up in his own shit to worry about you. That’s powerful stuff, no matter how you frame it.

In the immediate moments of finishing up the picture, my knee-jerk reaction was: I really don’t want kids if this is something I am going to need to worry about. I then realized I was being silly, and that life will march on despite any reservations we may have about it. Women not being in control of our bodies is a very real issue today, and that is what we should take away from this picture. Rosemary’s Baby was screened in 1966. The disgusting truth is that we still have reason to fear the forces that are supposed to protect us during a pregnancy in 2013 when I first watched this film.

This is why I love watching movies, making my own movies and daydreaming about them all day long. The good ones get under your skin and make you think. That’s all a creative mind should strive for: getting under someone’s skin to draw them out of their comfort zone. Art isn’t pretty. It’s not safe. It should you rip you to your barest, basest instincts, whether you’re producing it, or consuming it. Tearing down the walls we build to protect ourselves from each other is what makes being a creative person worthwhile.

Go confidently in the direction of your dreams. Live the life you've imagined. Thoreau