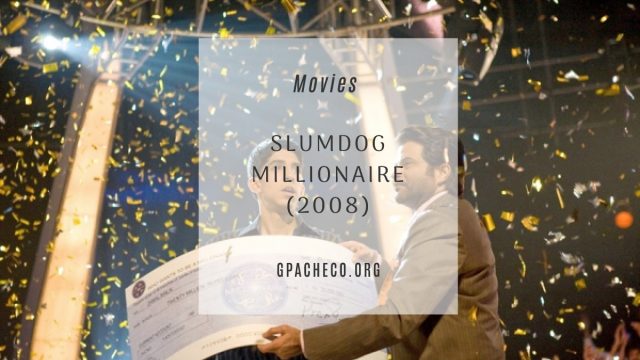 Heartwarming AND heart-wrenching. The lengths one will go to for love. All within the context of “Who Wants to Be a Millionaire?” Who knew?

Slumdog Millionaire had it all, as far as I’m concerned. Drama, comedy, family issues, romance, rising above what society expects of you to be.

But what’s pretty much remarkable about the film is that while Jamal did rise above (as the social implications of being a slumdog are pretty obvious), he didn’t do it for himself, or the money, or the fame. Instead, he did it for love.

A noble sentiment much appreciated by this cynic.

The movie starts with a question: Mumbai, 2006

Jamal Malik is one question away from winning 20 million rupees.

How did he do it?

I’m not going to give it away, but it’s obvious what the answer is.

The movie grabbed me from the brutal beginning to all tied up neatly ending. I was laughing in all the right places, grimacing during the sad parts, and struggling to keep up with the subtitles. The bad guys get their comeuppance, and a new beginning comes with the end. Through a bitching Bollywood number over the credits, you can see this crossover of Jamal and Latika’s adulthood. 😀

You can see the subtle progression of Jamal’s “knowledge” as a slumdog within the context of the show. Jamal explains how he knew the answers, and we learn his life story that way. It’s amazing what we pick up as we age. Those little things could serve us in the most random of places, such as a quiz show if it came down to it.

As such, I love how they used “Millionaire” as the basis. A book called “Q&A” by Vikas Swarup was the source material for the movie. Typically, in a novel, you’ll find the author expects you to know the format of the game show without naming it. A publisher can rarely secure the rights of a trademarked entity. But everyone and their grandma know “Millionaire,” no matter how long you were into it: the music, the stupid banter from the host, the lifelines, the nervousness of the contestants.

Listen to M.I.A.’s “Paper Planes” in the film, in the most perfect of places. Danny Boyle – the director – put it in the movie right where you’d expect it to be. It’s either a remix or a redo, though, because Maya’s vocals sounded somewhat off-key. I guess Boyle and A.R. Rahman (the film’s composer) didn’t want to use the album version. The version they used was excellent, though; it fits the scene. Unfortunately, while familiar, the “Slumdog” version was also kinda jarring, at least to M.I.A. connoisseurs such as myself.

I had seen Dev Patel – who plays Jamal in the film – during the first two seasons of Skins. It was crazy to see him play someone that’s not Anwar. But that’s the point. To grow as an actor, you have to take on things that people don’t expect. Incidentally, Skins is the reason why Dev got the role. I kept saying to myself, “That’s Anwar, wow!”

Salim – Jamal’s brother – is one of the aforementioned bad guys. But at the same time, you can see why. You sympathize with him even though you find yourself fighting against that. He did have some redeeming qualities, such as his devotion to Jamal in that “big brother who can easily kick your ass to keep you in line” sort of way.

You could also make the argument that Jamal didn’t go down the same path as Salim did. Jamal had seen and lived through the same devastation as his elder brother. But I think Latika and the essence of her helped keep Jamal in line the whole time. Salim had to be the big brother at all times to both of them and frequently to others. He knew the score; he chose to go down that path. That’s a considerable burden on anybody. But, as I mentioned before, he does get his comeuppance though it’s not as dark as all that. It’s bittersweet what happens to him in the end.

All in all, I would recommend going to see it if you can. I was entranced the whole time I watched it. You feel for each of the characters in their way.

The difference between genius and stupidity is that genius has its limits. Anonymous