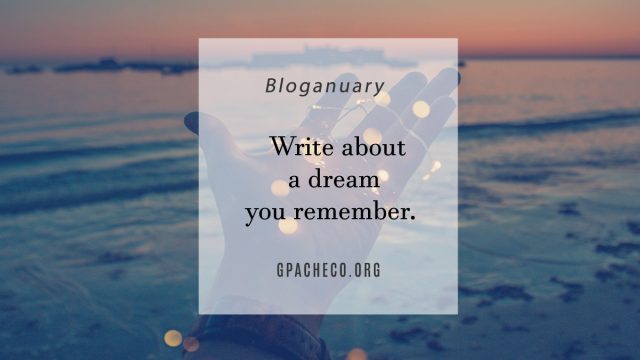 Ooh, this is a good one. I had one of my teachers say that a story you write shouldn’t be based on any dream you’ve had, and I remember feeling so deflated when he said that. I’ve honestly dreamed of some humdingers in my life. It’s true that the written down story didn’t end up exactly like the dream but it was a spark of something.

So, here’s my most recent vivid dream. I won’t share too many details because I do want to write it eventually!

Teresa, a gangly 20 year old Filipino girl, runs away from home with nothing but a handful of cash from her childhood piggy bank, a journal and a pencil to escape a money marriage. Her family belongs to a religious cult of unknown origins. She hitchhikes from her small town in Northern California and bumps into Emilio Soria, a Mexican from South L.A., on the Greyhound headed back to his hometown that she managed to slip on. His migrant family includes his mother (also names Teresa) and his father Pete (Pablo).

Mama Teresa always left her doors open for the various characters that come and go in their working-class neighborhood. Latchkey kids and wayward adults often befriended members of the Soria family, and knew they could always get a hot meal and a warm bed. Some never left and became extended family.

18-year-old Emilio is interested in attending college up north next year and has been doing tours every weekend when he could sneak away. He took time off after graduation to save up even more money. He’s immediately protective of Teri who doesn’t speak of her past, at first. She begins to document the people around her, writing down their colorful stories. Emilio notices and quietly buys her notebooks and pens to replenish her supply, leaving it on her side of the bedroom she shares with his kid sister, Laura.

They begin to bond over movies and books, sharing intimate yet spirited arguments. They fall in love. Emilio asks if she will go with him to San Francisco to tour a school. She is reluctant but agrees. He uses some of his savings for a rental car so they can come and go as they please. He rents a beautiful suite with hella nice views of the city. They make love for the first time in their hotel.

Someone from her church is visiting the city at the same time as they are and reports to her parents who rush in. They miss meeting her because the hotel they rented was in a completely different location than the school. Teri doesn’t suspect a thing. Turns out Emilio submitted one of her journals to the school and the tour is for her. They want to give her a full ride for creative writing. Teri agrees and Emilio says he will also take the scholarship offered to him so that they can be together.

For some reason, the dream ended a lot sooner than the synopsis I wrote. Teri is chased by the cops for theft (mistaken identity, obviously), but she hopped a fence and they backed off for some reason. When I was writing everything down furiously on my phone, all I could think was ACAB. I refuse to write anything where the cops are a driving force to a story. They’d kill Teri, especially in South L.A., especially for being brown.

I want my characters to have a happy ending, no matter how meandering it may be for them to get it. Which is kind of what happens to Teri and Emilio. At least in my notes, ha!