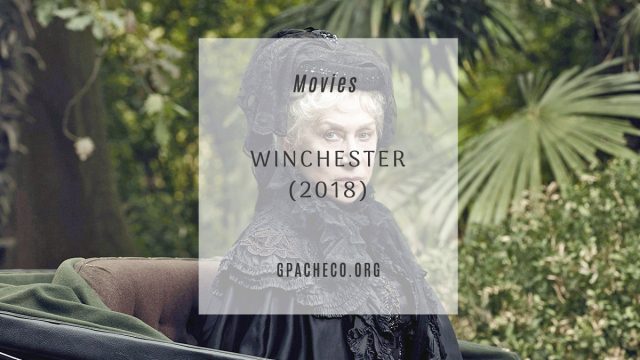 I have been keeping up with the press for the movie since the announcement. I almost went so far as to watch the premiere at the actual Winchester Mystery House. That meant touring the mansion, enjoying a reception, and then walking across the street to CineArts on Santana Row to watch it. I’m a huge fan of Mrs. Winchester. I’ve owned annual passes to the House over the years. The house is one of the best examples of Queen Anne architecture that survives to this day.

Mrs. Sarah Winchester married into the Winchester Repeating Arms Company family for those who don’t know her story. Her husband and daughter died, and she inherited her wealth upon his death. Her doctor recommended that she move from the East Coast to the West Coast. She settled in San Jose, California, for its Mediterranean weather, which helped keep her persistent health issues in check.

She felt possessed by ghosts and spirits killed by the Winchester weapon and thus became the start of her extraordinary story. Twenty-four hours a day, seven days a week, save for holidays, Mrs. Winchester had workers building and then breaking down what they built, based on her seances with ghosts. It wasn’t all that bad. Most of them lived on-site, brought their families. It was good work for the 19th century going into 20th century America. The house itself is a technological marvel of the time. She used the latest tech, stuff we take for granted today. I can’t even list them all here!

The film itself had the appropriate horror and thriller, without being too corny or too over the top. I’m not one for out-and-out gorefests in my horror flicks, and Winchester filled that need. However, horror’s not supposed to be just slapstick jump scares for horror’s sake; it’s supposed to reflect the darkness of human nature, make us uncomfortable, make us question reality.

The plot took the standard approach of bringing an outsider into an established universe, which Jason Clarke’s Dr. Eric Price does. The Winchester Repeating Arms Company engages his services to address the mental stability of Mrs. Winchester. However, the good doctor had an interesting backstory that played out believably on-screen.

I loved Helen Mirren as Mrs. Winchester. The real Mrs. Winchester is much shorter than Helen; she barely cleared 4 feet, if memory serves me correctly. That’s why there’s a staircase in the house with impossibly small steps. I had hoped they would address that, but again, artistic license. So I’m cool with that.

I already knew the villain was a villain because the filmmakers lit him in one scene. I won’t say anything else, but look out for that.

I loved how they incorporated actual bits of the house, such as the Tiffany windows, the Shakespeare windows in the ballroom, the rooftop, the kitchen, the Door to Nowhere, the beautiful entryway, and the spiderwebs. But there’s so much more they missed. So honestly, if the movie piqued your interest, take a trip to see the actual house. You won’t be disappointed.

All in all, if you’re looking to have a fun night out, give Winchester a shot. I genuinely enjoyed it. It took great liberties with Mrs. Winchester’s story, but who’s to say this stuff couldn’t have happened? Maybe I’m drinking the Kool-Aid, but I do think she had a connection to the ghosts. I mean, wouldn’t you feel her guilt eventually, too? It’s not a perfect movie, but it was an enjoyable way to provide a glimpse into the source material.

These are some of my favorite pics of the Winchester I’ve taken over the years. Enjoy!