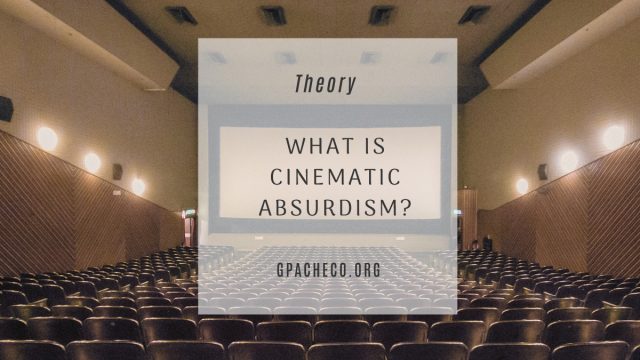 I’m not afraid to say that movies have had a bigger impact on me than books. Books absolutely opened the door and reassured me that I can tell a great story.

Movies encouraged me to tell a great story in a small amount of space which is how I approach short fiction. There’s something magical about shaping a story to be as cinematic as possible.

To me, both of these formats are about telling damn good stories.

Writing is much easier than trying to get a film made. You can write it, revise it, and throw it out into the world without involving this, that, and the other person.

When you’re trying to get a film off the ground, you can’t seem to get your schedules on track and now you’re three months behind in pre-production. Making a movie is an emotional wasteland.

As a writer, you are in complete control of the story without having people be dependent on you – or you on them – to get your story into someone’s eyeballs.

The Textbook Definition, If That Was a Thing

I coined the term to explain the stuff that I write because I couldn’t find something that fit my style.

Cinematic absurdism places the emphasis on putting your characters in left of center situations. They would be completely acceptable in a movie but remain grounded in the reality of literary fiction. Each paragraph break is a stage direction. You could treat the words on the page as a working storyboard. The rise and fall of the story are propelled forward by the characters’ dialogue firmly shying away from traditional interiority.

One genre that I have picked liberally from is film noir, mostly Sunset Boulevard (paid link) which heavily influences one of the stories – When You Were Young – in my short fiction thesis. But seeing The Maltese Falcon (paid link) – the apex of the genre, so much so that no one has dared remake it since – was like being born again.

One genre that I’d love to steal from (because that’s all art is, stealing from everyone before you) is German Expressionism.

Metropolis is arguably the first science fiction picture ever made. Das Cabinet des Dr. Caligari is another brilliant film from that genre. Ideas, ideas.

How Did You Discover It?

Back in my graduate writing program, I didn’t realize it but I leaned heavily on dialogue to creatively move my stories forward.

You followed along through the words they spoke. The conversations that they had, the clues that the story was going a certain way was told all through dialogue.

Truthfully, when I first started in my program, I was unrefined in terms of my craft. I knew I wanted to write; I knew that I could. But I didn’t have a voice, a way to tell my stories in my own way.

I was intimidated by most of my fellow students because I could tell right away that they already found their voice.

But the night that I was told in a workshop that my work depended on dialogue, something in me blossomed. And it was the seedlings for cinematic absurdism.

The grandfather of cinematic absurdism is Ray Bradbury.

I’m the most cinematic writer around — all of my short stories can be shot right off the page.

The overall nature of the stories is that they could only take place onscreen, yet they exist for you at this moment to consume them through a piece of fiction.

More feedback that I’ve gotten is that they feel real but there’s something unnerving about them that forces you to question yourself at the end by saying, that’s so absurd, that would never happen in real life.

That’s the beauty of cinematic absurdism.

It doesn’t follow the strict definitions of either of its host words. It’s not inherently cinematic because it exists on the page. Cinema implies that you’re supposed to be watching it on a screen, not reading it.

focuses on the experiences of characters in situations where they cannot find any inherent purpose in life, most often represented by ultimately meaningless actions and events that call into question the certainty of existential concepts such as truth or value.

There is an exploration of the human condition through unreal situations, but there is always a meaningful purpose for these events that we find our characters in.

We dip into their lives at a certain point and we hit the ground running straight into the wall at one hundred miles per hour.

There is always an ending. Maybe not happy, maybe not rock solid.

Someday, I hope to share this style with other authors who may feel their work would fall under the auspices of this genre, to give them a home for their own creativity.