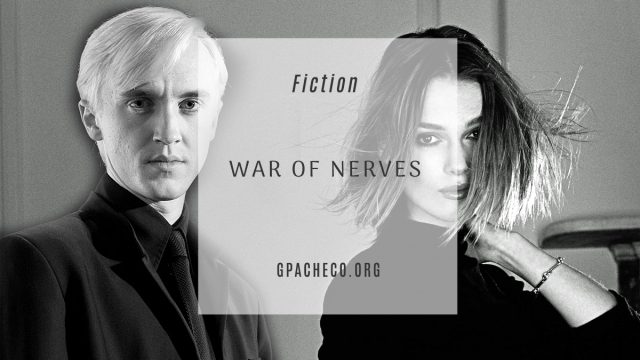 Rating: G.
Category: Drama/Relationships.
Summary: Draco comes crawling back to Melody.
Timeline: After Series 1 of The Alliance of Destiny.
Disclaimer: Harry Potter and related characters belong to JK Rowling and related entities. Made-ups are mine and mine alone.

Melody stared out the window as the English summer rainstorm poured outside. She had passed her Apparation test, having come of age just a few short weeks before. Her father made her a special dinner and even took her shopping in Muggle Paris and some choice spots in the wizarding section there. They were back now, having Apparated together from Paris to her childhood home in Teddington. Her gaze moved to the armchair in her room for some reason. Melody was unhappy, which was not normal considering her life was going in the direction it should.

She missed Draco Malfoy, she realized. He would’ve been pleased to learn she could Apparate now. They had talked about their Apparation tests shortly before their huge fallout in sixth year.

‘And it wasn’t that too long ago,’ Mel mused.

Her mind wandered back to the tumultuous year she had as a sixteen-year-old witch, pressing the top of a Muggle click pen out of a need to keep her hands busy. Among other things that happened that year (her best friend coming face-to-face with You-Know-Who being one of them), she was ready to shout to the world how incredibly lucky she was to have found the boy of her dreams right there at school.

The only catch? His family would never approve of her.

In fact, he had established his reputation at their school, Hogwarts School of Witchcraft and Wizardry, as a Mudblood hater from the moment he stepped into the Leaky Cauldron. A Mudblood is equivalent to a curse word in the wizarding world. It rudely defines people who are not pureblood, like Draco’s family.

Monday on the line
When you know that now’s the time
To leave and be free, aware of your destiny
When that moment arrives
Wild visions through the mind
And all I see is what used to be
My life could soon be a memory

Melody’s mother, Maria Santiago, was an American of Filipino descent. Melody didn’t look a thing like her mother, more like her father, Gabriel Masterson. Gabriel’s first wife Ginger, the mother of her older brother Oliver, had died fighting against the Death Eaters in the First War against You-Know-Who.

Melody stared at the hands folded in her lap.

She had Maria’s hands though, and her smile. Those were traits she treasured, as her mother committed suicide when she was seven years old. The Mastersons never truly knew or understood why Maria committed suicide. Melody had worked through her guilt with the help of a therapist from St. Mungo’s Hospital for Magical Maladies and Injuries.

At first, the tiny voice in her head said that maybe not cleaning up after herself, or demanding too much of her mother’s time, might have contributed to her mother’s untimely death. But she didn’t feel that way anymore. Draco filled that emptiness of the loss of Maria for the first time in her life when they met during first year.

But Draco was a wuss. He wouldn’t admit to anybody in public what she meant to him. He told her many times during their trysts in Hagrid’s hut, the Room of Requirement, even the greenhouses where she used to tend singing roses.

‘What a cow,’ Melody thought when the image of Pansy Parkinson’s pug face filled her mind.

Finally, she dulled herself against the pain of losing her one true love with a Hogwarts-approved club. It was headed by a Muggle named Xander Harris and he taught karate. She joined the club to follow through with all the angry energy coursing through her body after they broke up. Plus she helped rid Hogsmeade of various nasty demons You-Know-Who had sent in response to the appearance of Sydney Bristow, Buffy Summers, and Angel there during that year.

Her father didn’t like the idea of her participating in a karate club, but when he realized it would be best for her state of mind (without Melody getting into details about Draco being the reason she joined), he was gung-ho about it.

‘How’s the club going darling?’ he’d end every letter she received by owl.

She giggled. Gabriel Masterson was a big dork when Melody thought about it. A strong, loving, funny, and caring father, he lost both wives to death and survived, raising two children by himself while juggling a Muggle job as a playwright and West End actor, as his parents had also died in the First War.

She placed her palm on the cold pane of glass, staring out at the bare lawn as pools of rain collected in it.

“I miss you so much Draco,” Melody whispered. “Why? Why couldn’t you just say it? Why are you so afraid?”

There was a loud pop behind her and she whipped her head around. A person she hadn’t hoped to ever see until the beginning of seventh year was staring down at her, a morose sort of look on his pale, pointed face.

“Why couldn’t you understand that it’s just the way I am?” the voice replied.

Melody withdrew her wand and aimed it straight at his chest. “What are you doing here, Draco?”

He smiled and flipped his long, blonde bangs out of his face. “I heard you call me. So I came straight away.”

“Passed your Apparation test, did you?”

“Would you have thought anything else?”

They giggled, momentarily forgetting their feud, but their happy faces faded.

“Melody, I genuinely miss you.”

A knock sounded at the door as Melody opened her mouth to reply.

“Mels?” Gabriel called through the locked door. “I heard someone Apparate. You don’t have a boy in there, do you?”

Melody glanced at Draco and aimed her wand at the lock on her door. “I do, actually. Come in.”

“Oh. Hello,” Gabriel said, eyeing Draco up and down. “I knew I should’ve cast an anti-Apparition spell on this room when Melody passed her test.” Melody groaned inwardly. ‘Dork!’

“You must be Mr. Masterson,” Draco began, holding his hand out. “I’m a friend of Melody’s from school. I’m Draco Malfoy.”

Gabriel warily took his outstretched hand. “You wouldn’t happen to be Lucius Malfoy’s son, would you?”

“Yes sir,” Draco said seriously. “Did you know my father?”

Gabriel cleared his throat. “Yes, I did, in fact. He didn’t like me very much, truth be told. What business do you have with my daughter? I thought your sort didn’t sort with her.”

Melody’s opened wide in embarrassment and she stared at Gabriel, as Draco smiled in response.

“Your daughter means more to me than anything,” Draco said in a loud, clear voice, his gaze trained on Gabriel’s eyes.

Gabriel, in the meantime, was performing Legilimency on the spawn of Lucius Malfoy. Images of his daughter making love to Malfoy filled his mind, as did other non-sexual, but intimate moments. Gabriel shivered at the thought of his little girl having sex, but this was her life. She made her own decisions. He was only here to guide her.

Melody gasped, half-hoping Gabriel wasn’t staring at Draco because he was performing Legilimency. Her father was good at that gift, and both she and Oliver knew never to lie to him. He would’ve seen right through them anyway!

“I have a pot roast in the stove,” Gabriel said, content with what he saw. “Would you like to stay for dinner?”

Draco grinned at Melody, who stood up to stand by his side. “I’d appreciate that very much, Mr. Masterson.”

Dinner was a friendly affair. Draco said all the right things to Gabriel, who liked him more and more. He couldn’t believe that he was related to Lucius Malfoy, of all people.

Melody sighed as Gabriel and Draco began chatting animatedly about the Irish side’s chances at the Quidditch World Cup in a few short years.

“They were brilliant in fourth year,” Draco said happily.

“You were able to go to the World Cup?” Gabriel added. “Mels and I went too, didn’t we darling? Time of our lives.”

She grinned at him as Draco replied, “Top box.”

Gabriel gasped. “No kidding! I had some friends in high places at the Ministry and they wouldn’t give me the top box,” he whined slightly.

Gabriel continued to talk about the last Cup, as Draco caught Melody’s eye from across the oak table and held it for a moment significantly. Melody smiled at him. His pale grey eyes. She missed them too.

After dinner, Melody made coffee. “Welp, it seems I have a prior engagement with an angry theatre demanding I write them another stinkin’ play about love gone wrong,” Gabriel said, yawning and stretching. “I’ll take this cup to go, love.”

Melody and Draco didn’t move from the table as Gabriel made his way upstairs. “No funny business,” he added teasingly before he disappeared.

“Your father is a great man,” Draco offered before bringing the cup to his lips.

“The only great man I have left in my life,” Melody said almost sarcastically.

Draco set his lips into a thin line. “Mel, I wish I could make you see..”

“Make me see what, Draco? I know exactly what’s in front of me and he doesn’t want his pureblood friends to know about us. Our love transcends regular love, to paraphrase my dad’s last play. What? Tell me. Is there more that I’ve forgotten?”

“Well, what else am I supposed to think? You Apparate here out of nowhere and I’m supposed to let you come back into my life on your hands and knees and just accept the fact that you hurt me? Deeply?”

Draco put his cup down and reached out for her hands. “I didn’t mean to hurt you. I know that it ended up that way, but I hadn’t meant to.”

Melody shut her mouth for a moment and let him speak. She missed his touch too.

“I know I don’t deserve your attention anymore, after the way I treated you, but I thought you should know that I truly do love you and I hope you will give me another chance.” He clutched her hand tightly. “One more year, Mel. One more year and we’ll be out of Hogwarts, free to do whatever – and whomever – we please,” he joked slightly. She gave him a look.

Melody looked anywhere but him for a few seconds, her thoughts trying to come together to form a cohesive statement. Melody knew that if she just had a second chance, she’d ask her mum to think twice about leaving their home on the night that she died. Melody remembered that Professor Dumbledore also believed in second chances. Maybe that’s all they needed. A second chance.

“I’m not saying I approve of the fact that you want to keep us secret again, but… I miss you too.”

Draco heaved a sigh of relief. “Thank Merlin. I hoped that I wouldn’t have to go home with my tail tucked between my legs like a dog.”

“One more year,” she reminded him, standing up. He followed her lead and brushed his hand across her cheek. He tipped her chin up and kissed her.