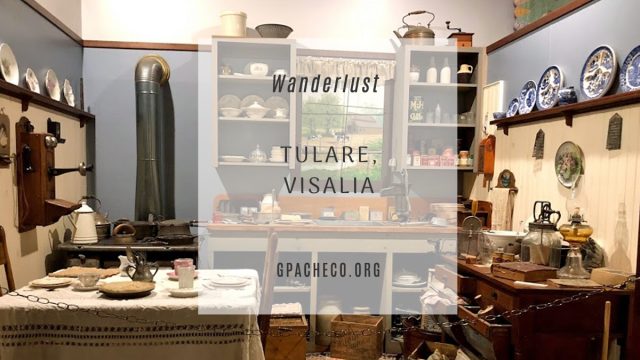 I had been whinging at my best friend for a few weeks that I needed a road trip to clear my head. Visalia’s less than six hours away from Vegas, so I figured I’d get out of my routine and go to a junk show on Sunday. I booked a cheap but decent room (less than $100) for one night, down the street from the front. So I decided to leave on Saturday morning.

Ma was overly protective of me during this trip. It was seriously an overnight; I needed to get on the road. I figured out why road trips breathe new life in me, which I didn’t question until this trip. I grew up in Modesto, which is less than two hours away from Visalia. There’s NOTHING there but orchards around you for miles. You HAVE to drive a minimum of two hours (one, if you’re a speed demon) to get to anything fun or with any culture.

Am I sitting in my car for hours on end? Used to it. Period. It’s what I’ve always known. I internalized it, and it influences me creatively. I put on music, sing at the top of my lungs, and avoid CHP in both directions! I’m probably the only person who enjoys the journey more than the destination half the time. I love the wide, open road, seeing grain trains. I live my best life on the road, especially in California. It’s why it influenced my MFA thesis so heavily.

I stopped for a bathroom break, and my anxiety went through the roof briefly because some old lady parked next to me. First of all, there are tons of spaces with lots of shade too. Nah, this old biddy ended up next to me. I mean, I know my car’s a babe, but, c’mon, go away.

I stopped at the Tulare Historical Museum and got acquainted with the history there. Of course, Tulare – the city – has a great history.

They had a bond-burning celebration. I think that was the cutest thing I’ve ever seen as part of the fabric of a museum. Overall, it very much reminded me of Modesto, and I know they’re close in geography, so they share that small-town attribute, but still. It was genuinely fun. So roomy! Their museum took over an old high school, and I loved the way they used the space. I enjoyed the war room. They had an entire room dedicated to every war up until Desert Storm. I was shocked they included the Spanish-American War! Very cool. I was the only person there, but maybe because it was close to quitting time? They also had a lovely art show in their back room. I bought a couple of books because that’s what I do.

I got to the hotel in one piece, and I got an excellent room. Unfortunately, they forgot to plug the fridge back in, which I assumed they needed to vacuum. I quickly discovered I hadn’t packed my charger, as I told myself a million times. I even have a special wall charger that charges plugs and has USB ports—left it in a drawer! I wanted to slam my head into a wall. Instead, I told my BFF that it’d been so long since I had taken a road trip, so this was my punishment for not having it.

After a shower and some relaxation, I went to Target to get a charger. I had the cord, cause I never leave home without that! Thank god for Target being the same everywhere. You know what the prices will be, and you know you’re going to find it where it would be on the shelf at home. I ended up buying a Golden State Warriors shirt too.

I got lost on the way to a restaurant called Crawdaddy’s for dinner. Lots of one-way streets. I hate them, haha. I had a lovely Filet Mignon Rossini with steamed veggies and mashed potatoes. The food quality wasn’t that impressive, but when you’ve been driving all day with no food, you enjoy what you order. Honestly, it’s been so long since I’ve treated myself to a solo dinner, so I savored it. I also packed away their beignets, which I need to learn to make because I could eat my weight in them.

Afterward, I trucked across the street to the Regal to watch Pacific Rim: Uprising (paid link). It was a solid next step in the series, and I can’t wait to see where they take it because they left the door open to go deeper. The mango margarita hit me hard towards the end, so my senses were amplified because of it. But I would’ve enjoyed it, regardless. The edge went away as the movie progressed, so I was sober when I got back to the hotel.

I got a good night’s sleep, and I was up at my regular time: 5 AM. I laid in bed for a bit. I couldn’t get a late checkout, so I was somewhat mad about that. Two additional hours (which is all I needed) was equivalent to my one-night stay. I started packing and then promptly forgot my charger and cord again, which I didn’t realize until after the second breakfast (more on that later).

The continental breakfast offerings were slim, which the reviews of the hotel warned me about beforehand. I had some yummy waffles because you can’t fuck those up. It put something in my stomach, and it was free. I waited until the last minute to pack up the car and check out. I checked my bags a million times, thinking I put the charger in a pocket that I usually wouldn’t have. That was my first mistake.

I got to the junk show, called Rusty Roots, and walked around a few times, waiting for my BFF to arrive. She was also bringing me a cheesecake, yay! A lot of the stuff was super cute, but I didn’t see any wants OR needs. So I ended up purchasing an embroidered California plate on the wall in front of my desktop workstation at home. California will always be home, and I miss it very much. But it’s financially impossible to live there as a single person. So it’s a little slice of home for me.

A’s heart was not on her side, so she decided not to go to the show, even though she came all the way down to Visalia. So we ended up at IHOP (the aforementioned second breakfast). It turns out IHOP was down the street from the hotel, not like I was even looking for it, so I went back to the hotel to see if they had found my charger and cord. They had already turned over the room and thankfully put it aside for me, and the lady at the front desk remembered me. Whew.

The drive home was lovely. 80 past Tehachapi, but after the state line, I tried to chill. It would be my dumb luck to get a speeding ticket, and it’s not like I had a reason! I like driving fast when there’s a wide-open road in front of you, and there’s no weather holding you back.

I stopped at Murray Family Farms for a bathroom break and to buy goodies. I brought back chile mango dried fruit thingies for my boyfriend because I couldn’t get to a proper candy store for taffy-like he asked. I scored a strawberry cake for my family. I probably should’ve put it in my cooler, but I figured it would be okay because the trunk is air-conditioned. The frosting melted, but it was so good.

All in all, a good trip. I’m waiting for inspiration to strike, but it was nice to get out of my comfort zone for a quick overnight trip. I need to do it more often.