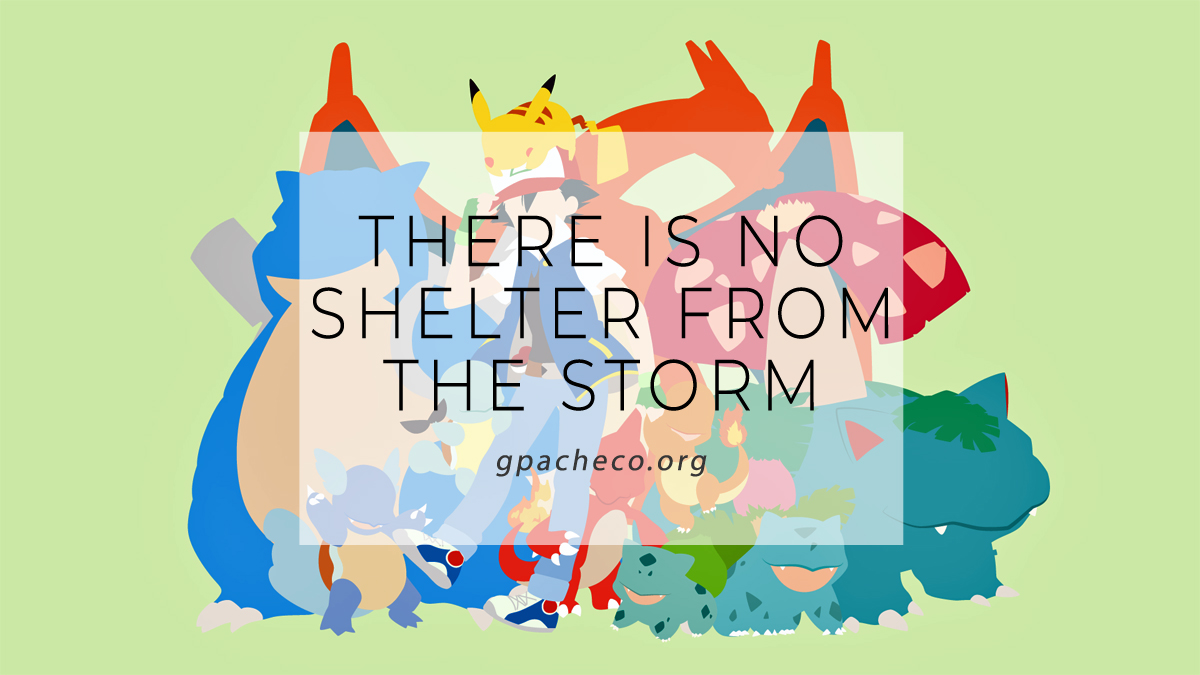 I picked up Pokémon Go on July 7, 2016, because I wanted to relive my childhood.

I had to share a GameBoy with my kid brother, and I watched him defeat the Elite Four of the Kanto region back in the day. We couldn’t afford a separate GameBoy for me, so I played his saved files. I watched the first season religiously. I wrote fanfiction. We collected cards, but we didn’t get far because, again, we were poor. I learned the Poké Rap. I collected the soundtracks. I memorized types. I favored water and psychic types. do! I have a life-sized Togepi that I got in high school – and it’s currently in storage – that I refuse to give up.

When they announced Pokémon Go, I thought I would give it a chance.

But then I got caught up in a frenzy.

I quickly joined Team Instinct because of the cheerful attitude of the team leader Spark. Yellow happens to be my lucky color. And, of course, I adore Pikachu, haha.

I completed my Kanto ‘dex on June 12, 2018, after conquering the Mythical Discovery quest. Less than two years to the day of starting the game. That was momentous to me. I was a real Pokémon trainer.

Granted, there are QOL (quality of life) issues that have not been addressed since launch. There are sour grapes in the mix that will deflate even the most devoted of Trainers. Sometimes the servers are complete shite.

But none of that supersedes the childlike excitement of leveling up to get to 40 (the maximum level in the game).

Nothing beats getting together a group of people – friends and strangers – chasing after legendary and mythical Pokémon in a raid.

The utter joy of encountering new Pokémon in the wild.

The stress of fleeing Pokémon, but then getting rid of shadows in your ‘dex later on. And, more recently, battling friends in PvP.

I don’t think of my gameplay as casual. I’m constantly hatching eggs, sharing gifts with other Trainers, participating in raids in my spare time, and trading with friends. I love the thrill.

So, today, I’m going to talk to you about this naming convention that I made up, and it hasn’t let me down yet.

Most of the ‘mons I keep on hand are ‘dex fillers, meaning I keep them because they complete my Pokédex. The vast majority of them are my heavy-duty battlers or gym defenders. Some are tanks, meaning they can take hits. Or they’re glass cannons, meaning they hit hard, but they faint if you sneeze on them, haha.

Everybody has different ways of differentiating the different ‘mons in their ‘dex. My boyfriend and I are always going back and forth about how our Pokédexes should be set up.

He once told me that IVs (individual values) aren’t that important to the overall game, but you should be distilling that information to the actual stats.

I got a brilliant idea in the car going to work when he said that.

This brings me to my naming convention!

Before I continue, Poké Genie does have a name generator. This article was written well before it was offered. However, I still prefer my own way of naming my ‘mons. Feel free to go with whatever works best for you.

Step 1. Scan the screenshot into Poké Genie as you normally would.

So, Poké Genie “unlocks” (so to speak) the IVs and statistics that hardcore Trainers like to know. Of course, casual Trainers might not care about this.

But that’s not why you’re here. If you’re like me – someone in the middle of casual and hardcore – all I want to know is:

These stats are listed immediately under the name you chose, like so:

For a more in-depth explanation of IVs and their influence, check out Pokémon Go Hub.

Step 3. Rename your Pokémon to reflect this new information, making it easier to search for in your ‘dex. For example, for Jirachi, I would rename it Jirachi514.

When naming your Pokémon, remember that personalized names can only be 12 characters long, including spaces.

A thing I do is build the ‘mon’s Charge Move into their nickname. Charge moves are more important to me than fast moves because I prioritize STAB (Same Type Attack Bonus).

In summary, having this information built into the name is a flag to my brain. It’s difficult to go back and forth between screens, build parties on the fly, or when I’m in the lobby for a raid. But I already know types by heart. As long as I know their stats and refer to them by glancing at their name, I feel confident I can perform my tasks as a Trainer with gusto.