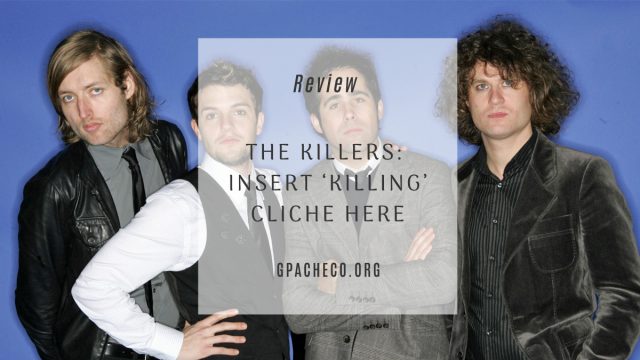 An edited version was published in the April 2, 2005 edition of College of Southern Nevada’s Coyote Press.

What if I told you that there’s a song on Top 40 radio dedicated to our humble town?

“Somebody told me/that you had a boyfriend/that looked like a girlfriend/that I had in February of last year.”

Who hasn’t dated someone in Vegas that didn’t look androgynous? If so, send them my digits.

The Killers – made up of lead singer/keyboardist Brandon Flowers, guitarist David Keuning, bassist Mark Stoermer, and percussionist Ronnie Vannucci – became an outfit after Flowers answered a newspaper ad by Keuning in the Las Vegas Weekly. The name comes from the bass drum set of the 2001 “Crystal” video by New Order (directed by Sophie Muller, who in turn directed “Mr. Brightside”, the second single from their debut album, “Hot Fuss”).

How Vegas is this band? Flowers worked as a bellhop at the Gold Coast, Keuning (the only non-Vegas native, having moved here from Pella, Iowa in 2000, but we’ll overlook that) worked at the Banana Republic, Stoermer shuffled body parts as a medical courier, and Vannucci was a photographer at the Little Chapel of Flowers (yeah, the same one Britney Spears put on the map last New Year’s Eve). As it was, they were heard by Lizard King, a UK-based indie record label, and they subsequently toured in support of “Somebody Told Me” and the UK version of “Hot Fuss.” Island/Def Jam released the US version of “Hot Fuss” with “Change Your Mind” in place of “Indie Rock ‘n’ Roll.”

“Hot Fuss” opens with “Jenny Was a Friend of Mine,” the perfect opener to an even better album. “Jenny” is one part of the murder mystery trilogy with “Midnight Show” and the currently unreleased “Bourbon on the Shelf” rounding out the three. The two tracks that did end up on “Hot Fuss” give you some insight as to what exactly the mystery is. It’s obvious how true to their influences the band succeeds when listening to “Hot Fuss” the first time around. You can hear the shameless ghosts of Morrissey (in “Smile Like You Mean It”, rumored to be the third single), Duran Duran, New Order, The Cars, and 80s rock bands.