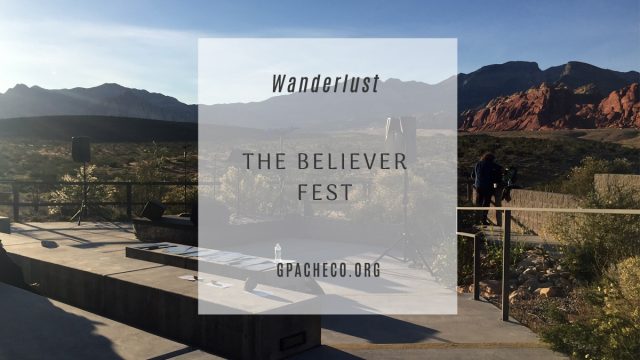 I had the opportunity to attend the opening night festivities of American Dreams: A Festival, hosted by the UNLV’s Black Mountain Institute and their newly adopted literary magazine, the Believer. So it was nice to get out of my head for a few hours.

I love Red Rock Canyon National Conservation Area. It’s one of my favorite places globally, a little slice of heaven twenty minutes from home. You could be on one side of the canyon and see cars on the Loop but never hear them. As soon as I’m able, I plan to get an annual pass.

The readers were beautiful. I kind of wish they had more local talent. There was a pop-up reading I couldn’t attend the night before that featured local writers, so that worked out.

It was a solid cross-section of male and female writers and people of color, and Jim James from My Morning Jacket performed a song for us. They all reminded me why we do this thing we call writing: it rips open wounds we didn’t even know we had. Hearing them read with the sandstone cliffs of Red Rock Canyon behind them was a fantastic idea. It was my first outdoor reading, so that’s a fun memory to put in the bank.

I guess my reservations were about the audience themselves. They were primarily white. Nearly every reading I’ve been to, the audience has been white. It makes me second-guess myself when I don’t see myself reflected in the audience. I write about the struggles of my people, but if they’re not coming to these readings, who read me?

I hadn’t written anything in a few weeks, so it dribbled out while I sat waiting for the reading to start.

Everybody here is white, middle aged, middle class. White dude next to me is talking about skiing, a perfectly normal hobby, I suppose, for white people with money. Where the brown people at? The unemployed working class, rising up against the bourgeoisie. That’s what I am. Maybe that’s the definition of my struggle, been trying to find what makes sense. I keep wanting to rise but then I fight and I battle past the Boss, and I get there wearing my crown, sitting on the throne and realizing in one swift motion that I don’t belong, won’t ever belong.

But I don’t belong to my people either. They don’t want me. I will always want them to want me but if you’re reading this it’s too late. Young kid behind me is talking about water polo. The fuck? You should be running in the dirt, using your imagination & reading books. Like I did. What childhood is there for these generations after me? Helicopter parents don’t let them wipe their ass without supervision. Why bear a child unto this world, this insanely fucked up world where no one belongs? No one is sitting next to me. There’s a tiny black bug who is moving his spindly little legs as fast as possible away from me. I’m wholly repellant.

I wasn’t able to attend the rest of the events for the festival due to scheduling conflicts.

I think my favorite memory will be that someone forgot what time we were supposed to leave and didn’t have anyone to open the exit gates promptly. So, like, no one could get out. Quite a few of us went as soon as the program was over, but we all followed each other to each gate, and they were closed! Everyone was pulling U’ies. A few of us realized that the only way to get out was to go through the Scenic Loop.

When I left, I was in the third car of five. Let me tell you, driving the Red Rock Canyon Scenic Loop in the pitch dark with no lighting and no moon to illuminate the way was very spooky. The park typically closes at eight, depending on the time of the season. So there’s no need for the maintenance of light poles in the Loop. I suppose I could have driven back to the Visitors’ Center to encourage the staff to open the gates strongly, but I thought I was already in my car. You might as well keep going.

Thankfully, I only live about twenty minutes away, so it wasn’t that big of a deal to go through the Loop. You know me; I love driving, but only under safe conditions. I don’t recommend driving around in the dark of a desert night with no phone reception unless you know where you’re going. But, of course, I would not have done that if I were visiting from out of town. I would’ve escaped back to the Visitors’ Center to freak out.