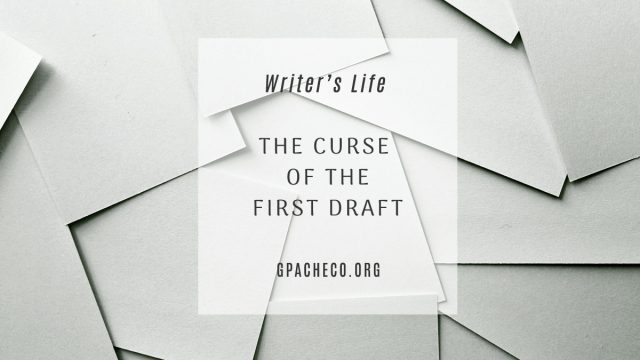 The first draft used to be a horrible, mentally draining aspect of the writing process for me, before I decided I wanted to be a professional writer.

I was so caught up in trying to be perfect from the moment I put words on the page that I never let myself relax enough to enjoy letting everything happen organically.

I think that’s a holdover from my childhood. I had this overwhelming need to project this perfect image of who I should be.

That wasn’t taught to me, it just sort of appeared over time.

As I got older, I realized I don’t give a fuck what other people think of me because this is my journey. No one is the star of the Guilliean show; I am.

When I finally accepted this (and it really wasn’t that long ago), I realized that I don’t need to be so damn hard on myself.

There aren’t any deadlines, and to have fun.

The most maddening part of writing the first draft is the story in my head doesn’t translate to the page. Sometimes it works out, sometimes it doesn’t.

I will have a really awesome story in my head and think, “okay, I’m gonna sit down and write it, and it’s gonna win the Nobel prize for literature!”

Then I get to the end, scratch my head and think, “that wasn’t supposed to happen.”

When I originally “pitched” Electric Angels, it actually ended up as something other than what I hyped it as. It was supposed to be a short story, maybe 10-15 pages, but then I got carried away because something else came out while I was writing it.

I ran with it because that’s what makes the first draft exciting. I let the characters frolic at their leisure.

I don’t think there’s anything mysterious about the first draft. It feels silly to elevate the simple task of a first draft to some higher, ethereal plane of thinking.

Just shut up, sit down and write it.