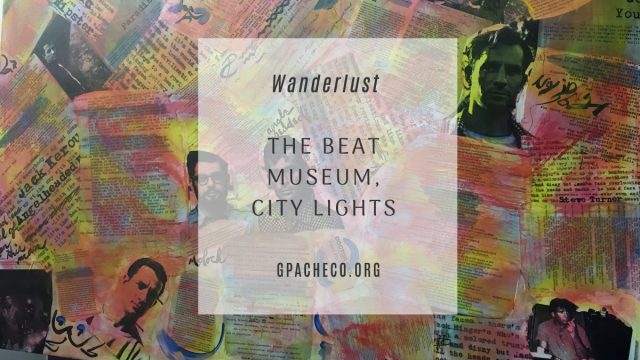 To try and get back to square one, I took myself on an Artist’s Date into the city. My Artist’s Dates have always been going to museums, not sure why. They’re not particularly creative, but they do satisfy my wanderlust. So I went to The Beat Museum and City Lights.

If you don’t know me, the Beat writers have been a heavy influence on my life, particularly Jack Kerouac. There’s a clue in me that wants to shed my privileged life and run off into the wild blue yonder, but I couldn’t do that. So instead, I live vicariously through their writing. “On the Road” changed my life. I don’t want to say it propelled me to be a writer because I’m one of those people who believe they were born to be a writer. I’ve always felt an affinity for their beliefs as a literary movement.

The dual-level Beat Museum was sparse but educational. One part was 3/4 of the first floor, which included the movie theater that showed a lovely documentary on Jack. The second level is where all the goodies were on display. They told the story of the Beats through exhibits, although that felt kind of haphazardly put together. It didn’t flow.

The museum could have sorted the exhibits by the year or by the author. But I felt like maximizing the space was the core of the presentation. I didn’t know where one section started and another began. I’d be reading one sign, and then it would jump to another author. They had a small selection of females in the movement.

All in all, it could have been better. But then again, what can you have in a museum about a literary movement? It’s not something you visit; it’s something you read and soak into your veins like water.

I felt like their main draw was the gift shop, which was excellent. It took up most of the first floor. It screamed hipster. Visitors can pick up vinyl records, vintage Playboys, and a small selection of new and used books, as well as bags and t-shirts. If you look at the gallery below, you’ll see three postcards. I got the one with Kerouac’s face on it a poster as well. I can’t wait to hang it up in my room in Vegas! The typewriter t-shirt ached hipster, so I had to buy it. The gentleman that rang me up said they sell a lot of them.

You don’t go to City Lights for the first time and not buy something, so I purchased “Howl” by Ginsberg, the Penguin Classics version of T.S. Eliot’s “The Waste Land” and a fascinating book on Locke. I’ve meant to write a story that takes place in Locke, so I think it will help my research. I wasn’t even looking for it, but that’s the best thing about bookstores, am I right? The right book falls into your hands when you least expect it.

Being in City Lights reminded me of when I worked at the Reading Room. That musty book smell, the cramped space filled to the brim with books, trying not to step on people as you’re both looking at titles on the same shelf, the staff picks. That is one past life of mine that I miss a ton. Unfortunately, independent bookstores are a dying breed. But there are some fighters out there. Plus, there are heavyweights like City Lights that won’t ever go away as long as humanity survives.