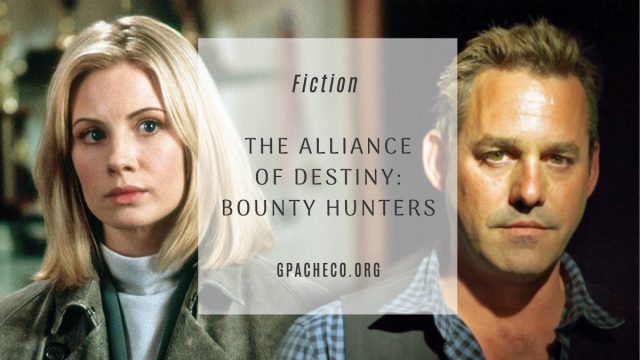 I wanted to thank you for your last letter. Yes, I will be visiting you and the rest of the Alliance for the Xmas holiday. I hope you don’t mind if I bring a few people along. I’ve mentioned them before: Hamish McCloud, Armando Rocasolano, Sienna Oyster, Tiffany Hamilton, and Christian Sanders.

Christian is my heir if you can believe it. Tiffany is his girlfriend. She is flighty, and she always wants to prove something to us, but she has a good heart. Anyways, I met Christian through that box you call a computer. Xander brought me to a computer class at the local community college. I went to a website, I think that’s what it’s called, and entered my information, and somehow Christian found me. He came to New Orleans, looking for me. He was a junior stockbroker in New York City, where I want to visit someday. So I invited him and Tiffany to stay, which they did. Christian has a creative side, and that brings in some money. Tiffany was a model in the city, so she models in magazines here.

I consider Sienna to be my sister like I’ve told you so many times before in my letters, but I never tire of saying it. I’m so proud of her. She got into a few fights when we put her in school here in New Orleans. She, too, was also trying to find her place. I guess this whole family is, aren’t we? She’s funny, loving, and intelligent, a bit like Dawn. I think that’s why I felt so attached to Sienna when I first met her.

She ran away from home because she has magical powers. But her parents didn’t want her to attend the local school of witchcraft and wizardry. They wanted her to live like a Muggle. Of course, when the police came after us, claiming we had kidnapped her, it all came out. Sienna’s parents agreed that it would be better for her if she stayed with us, but their only request was that she visit them occasionally and go back to a Muggle school. That’s fine for me because education is essential at a young age. I became attached to Dawn when I was in your body, so I guess there was always a part of me in search of another “little sister.” Tiffany says it’s because I was always the little sister.

Between five adults and a teenager, we live pretty comfortably in Armando’s house. It used to be a Catholic church, but he bought the land cheap and made it into a home. He made the deal thinking he would send for his son in California, but his son Antonio attends the witchcraft and wizardry school there. Antonio is the mirror image of his father but a lot more sensitive.

Armando is a widow and dating Sienna’s English teacher. It’s hard for Sienna to see her teacher Olivia as a potential mate for Armando. She understands the birds and the bees (I had Dawn explain it to me once), but she thinks it’s “weird” – her word – for her father figure to be lavishing his love on her teacher.

I don’t blame her, but Armando has been through a lot. His wife was a Dark witch who used him to father a child. Antonio was to be a human sacrifice to return a god she worshipped back to life. Armando had to kill her. I’m sad that he had to do that, but I think I would’ve done the same thing. So I think he deserves some happiness wherever he can get it. Sienna understands this.

I don’t remember if I told you, but I also took up side jobs to support my family. I became an assassin. Sometimes it was challenging to bring in a bounty, and some of our employers would say “dead or alive.” I preferred the killing, though I did spare a few so they could face their fate. Isn’t that terrible? I guess it’s in my genes, as Sienna explained to me. DNA and that sort of thing are interesting.

I met a girl. Her name is Jenny. I feel different when I talk to her. Not like when I speak to Xander or even Sienna, but different. She’s pretty, with wavy brown hair and brown eyes that sort of piercing my skin when she looks at me. I met her because a demon was trying to hire both of us to assassinate his human wife. He thought she was cheating on him and showed us proof, but we discovered in time that it wasn’t. I couldn’t bring myself to assassinate the wife, and Jenny thought it was funny. “An assassin with morals is new,” she said to me.

I guess that’s enough for me for today. If I don’t stop now, I’ll keep writing and writing about silly stuff. The next time I see you will be at the end of the month.