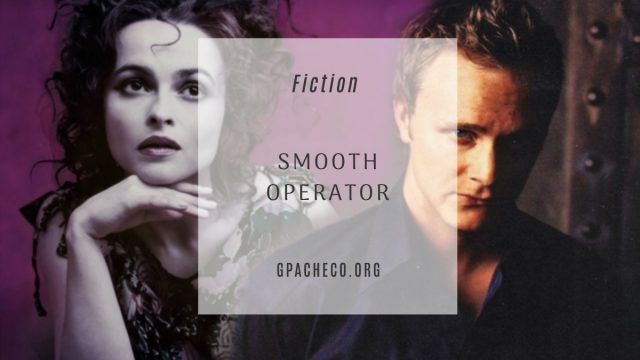 The smell of her body. The sweat pouring from his forehead. The fire in her eyes. The way their skin chafed against each other as he ground his hips madly into hers. Sark shook himself awake. It had been nearly two weeks. Two weeks since he had last been inside Bellatrix, melting and burning red hot.

One could argue that his fascination with Bellatrix Lestrange, presumably his aunt by marriage, was strange. He himself was the bastard child of Andrian Lazarey, the last remaining heir of the Romanov royal lineage. Lazarey refused to marry his mother, Julia Sark. Instead, Julia – a witch by birth – moved on to a half-blood wizard, Brandon St. John.

Brandon died in the First War against the Dark Lord, tortured by Bellatrix and her fellow Death Eaters, and ultimately suffered the fate of the Avada Kedavra curse. Whilst home from boarding school, Julian saw Brandon’s death with his own eyes, hiding in a trunk with his little sister Germaine, Julia, and Brandon’s only child. Julia was spared because Lucius Malfoy, a man she had met whilst they both attended Hogwarts School of Witchcraft and Wizardry several years before, stood between Bellatrix’s wand and her. Lucius married Julia soon after, but she was too sick to bear him any heirs by then. She died soon after the wedding.

Lucius adopted Julian and Germaine – both Squibs – and treated them as his own. He courted the well-bred Narcissa Black with his parents’ gentle urgings during their time away at Muggle boarding schools in Britain. The Malfoys felt that being a widow at his young age with two young children would do no good. His heir with Narcissa, Draco, soon followed after their courtship.

When Germaine was old enough to fend for herself, she left the Malfoy manor behind, never to return. A lot of good that did her. Julian himself shot the gun that murdered his sister, who betrayed him when she became an ally of Sydney Bristow, a woman in need of a good conquest.

Having no other family besides Lucius, Narcissa, and Draco, Julian kept in close contact, even as he joined The Man’s ranks and learned all he could from her. When she went back underground after successfully manipulating the CIA into believing Irina Derevko – The Man – was a good guy, Julian returned to the Malfoy manor on top of the world. It was here that he learned the Dark Lord had returned to power and was seeking another avenue to gain more power: the source of all magic. Julian immediately joined forces with his father and later, Bellatrix, his obsession.

Julian reminded her of the time she had almost murdered his mother during one of their clandestine meetings in a Muggle hotel room in New York City.

“Yes,” Bellatrix said, sighing gently, the sweaty bedsheets clinging to her jutting curves. She blinked her eyes a few times and smiled candidly at him. “Was it really that long ago?”

“Yes, and no,” Julian said, leaning over to kiss her. Bellatrix shied away instead.

Julian nodded and settled back down into the expensive linen sheets, gulping down another mouthful of the champagne they had ordered from room service. Bellatrix felt that sex was just that: sex. Kissing involved leaning lips, tongues, and closed eyes, neither of which she preferred to use in their lovemaking. She was very matter-of-fact about sex. If anything helped quell the demons of her past, she would succumb to it for a few minutes and forget her troubles.

“Do I make you happy?” Julian once asked after they had made love. This hotel room – in Montreal – was pitch dark. Julian only assumed he was staring into Bella’s eyes as he spoke.

She was itching for another go, but he always seemed to want to talk after they got off. It was no secret that Rudolphus Lestrange could not father children; only Bellatrix did not learn of his handicap until after the wedding. A wedding and marriage orchestrated by Lucius Malfoy, the only man she would ever love. She couldn’t bring herself to leave Rudolphus, though. Lucius was married, and she was too. She cared for Rudolphus, yes, but not as her lover. More as her companion.

She spent nearly sixteen years in Azkaban. It was only natural for her to lose her sex drive, along with her mind. When the time came, she escaped with Rudolphus and her fellow Death Eaters. She faced down Harry Potter to herald the return of the Dark Lord. That failed, as did the yearlong pursuit of and subsequent destruction of the Books of Life and Dead. The Dark Lord was in another dimension; it was confirmed. Slowly Bella gained her sex drive during the pursuit of the Books. She came onto Julian for the first time in the broom closet of a deserted home. She had felt an unearthly attraction to the gangly boy turned smooth operator. Finally, she couldn’t stand it after she and the Dark Lord had tortured Anastasia Darcy and Harry at the graveyard in Little Hangleton.

Lucius and Rudolphus had gone off in search of something, she forgot what, but it kept them away for a few hours. Finally, Bellatrix literally dragged him into the closet and pressed herself against him. He immediately became hard against her robes, and she grinned. Their first meeting was all arms, legs, and reproductive organs, meeting several times hungrily during those three hours.

But she couldn’t stop thinking about him. Hiding beneath his boyish good looks was the heart of a man she wanted to conquer all day long. So she began to make up excuses to meet him. She became the official liaison between the Dark Lord and his Death Eaters. Julian would volunteer to meet Bella in exotic Muggle locations not to tip off the wizarding population. Bali, Honolulu, Hong Kong, and Lisbon were just some of the places they met secretly. If people did suspect them of having an affair, they kept it to themselves.

“Julian, why don’t you have a girlfriend?” Bella teased him after spending and lying beside each other in the suite he had rented in Las Vegas. She could care less if he had a girlfriend. If he could stay her kept man for the rest of his pathetic life, she would be a happy woman.

“I have women, yes,” Julian replied carefully, unable to bring himself to mention Lauren or Allison.

“But there is someone else.”

“Perhaps. I hadn’t really thought about it.”

Bella stared hard into his eyes and got enough of a glimpse into his thoughts before he clamped a hand over his eyes.

“What have I told you about that Bella?” he scolded her, shimmying under the covers.

“I cannot help it. The Dark Lord himself taught me the art of Legilimency. I’m sorry,” Bella apologized emptily.

“What did you see?” he muttered, unable to bring himself over the covers.

“I think it’s sweet. Although it’s a bit infuriating to make me come night after night and to be thinking about another woman,” Bella scolded him.

“Sweet?” Julian replied, peeking over the covers and finally throwing them off. “What would you know about sweet? You don’t have a sweet bone in your body.”

“But I will,” Bella said nastily, her hips sliding across the bed to pin him against the boxsprings.

The affair went on for a year. Finally, it ended on the battlefield at Stonehenge.

Bellatrix, sweating, tired, and bloody, stood beside Lucius. Julian, both visibly in the same state she was in, stared as their enemies took off on a bewitched broomstick given to them by Peter Pettigrew. They had fought nobly against this alliance but had ultimately lost the Dark Lord in the process. Seeing Pettigrew betray them in this way, Lucius and Bella cursed him into oblivion. Still, he managed to hang on long enough to transform back into his Animagus form and scamper away.

“He won’t last long,” Lucius snarled to Bella and Julian. “We’ll find you, Peter! Wherever you are!”

“What happens now?” Julian dared to ask as they heaved and moved painfully around the stone structure in blind furies.

“We try and find out what happened to the Dark Lord, son, that’s what.”

And they did. They tortured a Muggle scholar who seemed to know about the Books of Life and the Dead. In between his beatings done with Julian at the helm, he explained that the Dark Lord had been sent indefinitely to another dimension, the one filled with shrimp. The scholar explained in between his whimperings that he didn’t know if there would be a way to retrieve him or find a way back. When Lucius and Bella were satisfied, they cast the Avada Kedavra curse on the scholar.

The split happened soon after. During the summer afterward, word got around that both Bellatrix and Lucius had failed the Dark Lord. As a result, the Death Eaters began to look elsewhere for proper leadership, some of them even trying to assume the throne the Dark Lord had created. Of course, this would not do any good to Bellatrix or Lucius, who both had ideas on how the Death Eaters should operate now that the Dark Lord was gone.

“Bella, stay with my father and me. Together we can bring the Death Eaters back together and share the power the Dark Lord assumed during his reign,” Julian half-begged her.

“Never beg, Julian; it makes you look weak,” Bella replied. She had one thing on her mind, and talking fully clothed in a Paris hotel suite, was not it.

“Surely you’ve heard the rumors,” Julian continued. He wanted Bella to join forces with Lucius and himself. “The Daily Prophet even ran that insidious article.”

“Yes, yes, I’ve heard the bloody rumors!” Bella nearly screamed. The Daily Prophet had been informed by an “anonymous source” (most probably Pettigrew) about the legend of the Books. The Dark Lord had been sent to the shrimp dimension, and his army of Death Eaters was running around with no clear leader. But Bella was his deputy. She had served him well. So it only seemed natural that she should assume his position as the Darkest witch of the age. “But I deserve the post.”

“What?” Julian said, nearly dumbfounded. “I mean to share it. You, me, and Lucius.”

“Ha,” Bellatrix replied shortly. “If you were given this kind of power, it’d go all to the thing between your legs.”

Julian’s mouth dropped open. “Is that what you think of me? An immature boy?”

Bella’s eyes burned into his, with the same intensity they shone when they made love. “Why else would you come to me time and again?”

Julian stared back at her coldly, mustering up enough energy to say what he needed to say. “No wonder Lucius never married you.”

Bella’s eyes grew wide, and she slapped him full across the face, drawing her wand in the process. “Give me a reason, any reason, to kill you now.”

Julian stood his ground. “I’m not afraid of you.”

Thus began a chain of events that irrevocably changed the lives of Lucius Malfoy, Bellatrix Lestrange, and Julian Sark forever.