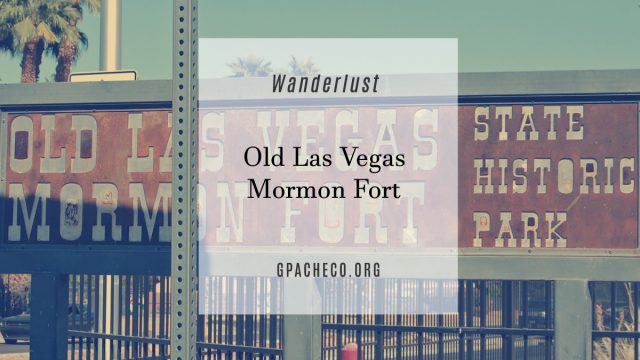 When I first started studying the history of my adopted hometown, the Old Las Vegas Mormon Fort was an important part of that studying. I asked myself, “What is this place?” Then, I realized what it was. This is the oldest surviving building in Las Vegas, Nevada, nestled right in the middle of the city, a stop on the Old Spanish Trail.

Granted, I’ve been here since 2004 and it’s taken me that long to visit! I’m going to try and explore more locations around the city as part of the Slanted Suitcase series.

Significance of the fort

The purpose of this structure is that it’s agreed to be the birthplace of Las Vegas. 32 Mormon missionaries arrived on June 14, 1855, from Utah to establish a midpoint between Salt Lake City, Utah, and Los Angeles. They built up small gardens, planted fruit trees and shade trees supported by a nearby creek (that still exists on the grounds), and built a 150-square-foot adobe fort. In 1856, it became the site of the first post office in the city. And, being Mormons, they tried to convert the Southern Paiutes. They ended up abandoning the fort in 1857. The desert is an unforgiving mistress.

In 1865, Octavius Decatur Gass took over the area and developed the Las Vegas Rancho, raising beef cattle, while supplying travelers and miners in the Potosi region.

It went through years of disrepair. It was even temporarily scooped up by the U.S. Bureau of Reclamation as a cement testing facility for the Hoover Dam. The state took over in 1991 turning it into the visitor’s attraction we know and love today.

Where the park is located

It’s just off the Cultural Corridor, and near the Las Vegas Natural Museum, Cashman Field, and the Grant Sawyer State Office Building.

What to do once you are there

There’s plenty of parking and I went on a Saturday, so there were a handful of folks there. You walk right into the visitors’ center where they have a small gift shop. And because it’s one of the parks covered by the annual permit, you can get free entrance, or simply pay at the desk. I snagged my Nevada State Parks Passport because it’s free and why not? I don’t know how long it’ll take me to fill it up but I’m going to do it!

It’s a self-guided walking tour and it’s very easy to walk around as long as you have comfortable shoes, sunglasses, and a hat. There aren’t many shaded areas. You’ll see things like the original footprint of the fort, a photo of the general layout of Mrs. Stewart’s era, the creek, and a marker for the Old Spanish Trail.

What to see there

I’ve provided captions for the photos below. Feel free to hover over them or click on a photo to enlarge and read.

Finally, if you didn’t already understand the irony of Las Vegas being named The Entertainment Capital of the World is that it was originally founded by Mormons. The photos show that the Mormon church played a big part in the beginnings of Las Vegas, and though that influence has tamped down in the last 20 years or so, they continue to have a strong presence. That history is something that you can experience when visiting historic sites like The Old Las Vegas Mormon Fort.