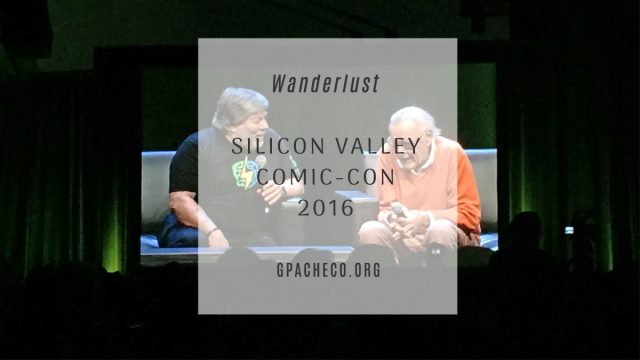 I attended two days of the Silicon Valley Comic-Con, which was also their inaugural celebration. They’d been hyping it for a few months, and I saw electronic billboards on 101 promoting appearances by Jeremy Renner and Stan Lee. It took place in San Jose, so it was a no-brainer for me to attend. Thankfully the library had a 25% discount on general admission tickets, which helped immensely.

Overall, this was an excellent first year for the con.

My itinerary for Saturday:

There truthfully weren’t any other panels I wanted to attend that day. However, Jeremy Renner’s discussion was just like how I thought it was going to be. He’s a super chill dude. Nathan was the funniest guy ever. He had us cracking up in every response to a fan question.

I couldn’t get into the Back to the Future panel with Christopher Lloyd, Michael J. Fox, and Lea Thompson because you needed a separate ticket. That wasn’t made clear to me. Otherwise, I would’ve gotten one in advance. Right around the time I was figuring out that I couldn’t attend the panel, security started hollering at people to move. I turned to look, and they were guiding MJF into the room for the meeting. Before I could process it was him, my camera hands were too slow, and he was gone. He’s super short, IRL. I could put him in my pocket; he’s so tiny.

My itinerary for Sunday:

I learned quite a bit from the writing and film panels. The advice was broad enough to apply to anyone, anywhere. I wish they used mics for the publishing panel because I came in late (I got lost on Sunday trying to get to the convention center from my parking, don’t ask!) and couldn’t hear very well from my crappy seat on the side, in the back, near the door that people kept opening and closing. I’m not necessarily a horror writer – which is what the scary writing panel skewed to, but I like making people feel unsettled with certain short pieces. Of course, I’ve gotten that feedback before. Film 101 was a treasure trove of info too. I had to take notes for that one.

Parking in downtown San Jose is a hot mess. I can’t get over having to pay for parking. That’s just not normal to me. I do it because that’s what you do, but I don’t know; it just feels weird. On Saturday, I paid $25 because I didn’t have the foresight to think it would be THAT busy and I could wing it. I went home that night, downloaded the SpotHero app & paid $7 for all-day parking at a lot 5 mins from the convention center. The money I saved using the discount with my wristbands went to parking for both days! That’s hilarious to me.

Saturday was the busiest day. They severely overestimated attendance levels that day, even with pre-sales and all that good stuff. People would line up for panels and spotlights, but you were never quite sure where you were supposed to be. You’d hope you were in the correct line & then you’d find out you were wrong & you’d have to stand in another line. It was a free-for-all in trying to attend spotlights and panels. I would highly recommend they fix that.

Another thing I would fix is the timing of everything. Even when I was pre-planning what panels to attend, I had to ensure they were reasonably close so I wouldn’t have to run back and forth too much all over the convention center. I feel like a lot of the panels were truncated because they scheduled panels one after the other. So one would have to wrap up fast, and then the next wave of people for the next panel would try to get in while you were trying to get out. Plus, meetings never start on time, so that was even less time to chat with the folks on the panel.

Gaining entrance was the easiest thing in the world. You enter the conference center and stay on the first level to attend panels, go to the gaming center or take photos, or go upstairs to the main halls for exhibitions and the central marketplace; all the good stuff makes a con for me. Going upstairs required a wristband. They had this excellent electronic RFID reader that was easy to get through.

However, I noticed that they didn’t have the wristband checkers on the first floor. My colleague said there were crewless elevators that you could use to sneak in and out past the primary wristband check. I don’t want to ruin it for future cons, but they should consider putting the wristband check area closer to the actual entrance of the convention center and somehow figure out a better way for crowd control. But, again, I recommend they spend some time talking to Disney.