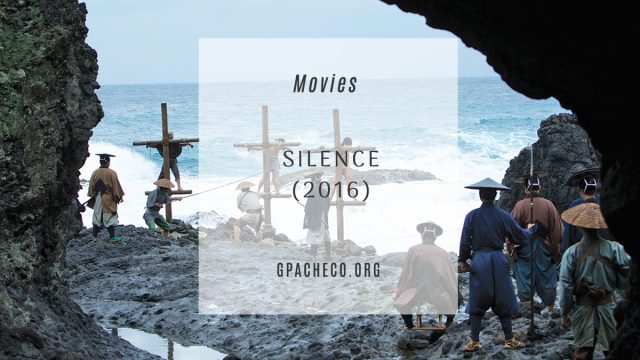 I love Scorsese flicks. I may be in the minority when I say The Age of Innocence (paid link) is one of my favorite movies of his. When you sit down to a Scorsese flick, it will be highly emotional, magnify complicated relationships, and often suffer from a slow burn.

Silence follows this recipe. It was drawn out in some parts and sped up in other places. It was 2 hours and 41 minutes long. I probably would have shaved a few more minutes here and there. I enjoyed the use of sound in the movie.

Although it’s almost too easy when you name your book and film about it, the title works on many levels. From the labels to the very end, there is a story told in the silence. There’s power hiding inside.

I studied the history of Japan extensively as part of my study for my minor in History for undergrad. When we reviewed the expulsion of Christianity within the larger picture of the country’s history, it was a few quick pages and more like,

“and then the Japanese expelled the Christian gaijin from their country and closed their borders to foreigners for almost 300 years until the arrival of Commodore Perry.”

Silence highlights a critical point during the expulsion and gets up close and personal.

Garfield as Rodrigues was an astonishing avatar for the audience to follow. However, I wish Driver had more screen time. Neeson almost always plays mentors who are a bit screwy in the head (Qui-Gon Jinn and Ra’s al Ghul, come to mind), so truthfully, it was a bit hard to suspend my disbelief with that. But I did because he’s a fantastic actor.

What was fascinating to me is that the Japanese weren’t a one-dimensional “villain.” Instead, the Inquisitor clarified that the shogunate studied Christianity thoroughly. They didn’t blindly reject Christianity just because foreigners brought it over.

They studied their enemy, so to speak, and knew how to refute anything Rodrigues tried to present as an argument intelligently. They believed themselves to be correct, and that was a dangerous enemy to have.

My one overall observation is when my fellow audience would laugh at some parts that I didn’t find funny at all. I suppose it’s my Catholic upbringing that didn’t laugh when Kichijiro kept asking Rodrigues to take his confession. That’s what made Kichijiro powerful to me. He kept doing the wrong thing, left and right. But he knew someone was looking out for him, and he only needed to ask.

Perhaps Scorsese (who co-wrote the screenplay, based on the book of the same name (paid link) by ShShusaku Endo) thought it could be a bit of brevity within the heavy material. If so, he won. But to me, it made me see a very humble Christian.

If you’re able, I recommend watching the movie. As I said, it runs on the long side, but it captivated me from the beginning.