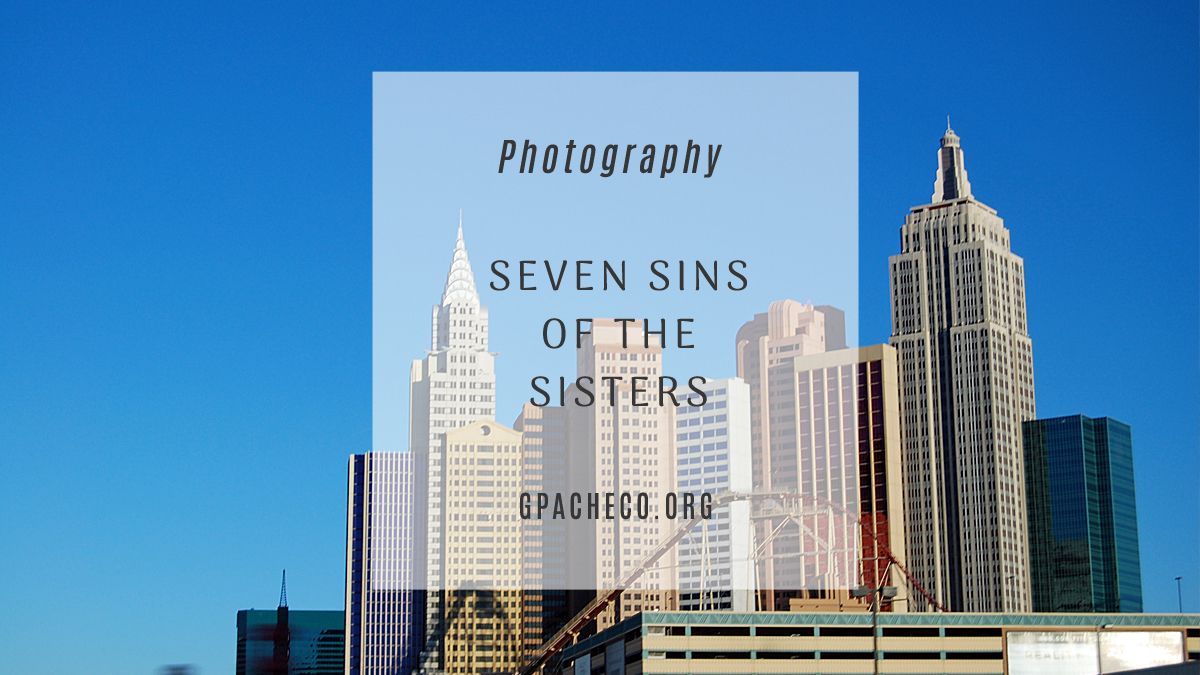 This was my final project for Nevada State College’s Outlaw Genres class.

I was born, baptized, and confirmed a Roman Catholic. There is a part of me that both agrees and disagrees with the way the Church works and its teachings. There is one thing that I know is true. I believe that my faith has made me the young lady that I am today. The opportunity to create something in place of an essay inspired me to bring together three things that I am: a female, a Catholic, and a photographer.

I tried not to focus only on the past sins of the Church with this presentation. Women of all ethnic backgrounds and social classes have limitations implied by our sex that persist in this day and age, as shown throughout the readings of this class. I believe that goes hand in hand with the idea of sins as taught by the church. I did not want to focus on the “bad” part of the institution of sins either. The Church has also included a virtue for every sin in order to allow spiritual growth.

Like Frances in “Grace” by Carmen Morones, I envy people my own age or younger to whom everything comes easy. My personal struggle with envy is that at twenty-five years old, I do not know what my calling in life is. I have never pursued getting my writing or my photography published, nor auditioned for bands. Instead, I have only held myself back for a few reasons: the fear of failure, as well as the lack of others like me in the mainstream. I did not even know there was a term for it: internalizing oppression. This is a theme that came up quite often throughout the readings.

This is a simple photograph, bottles of liquor. I was a bit culture-shocked when I first moved here from Northern California five years ago. I do not remember the liquor aisles being this complex. I could not think of a better way to capture gluttony than through the overabundance of alcohol poisoning opportunities that can be found in Las Vegas. How does this apply to U.S. Third World women? In the psychological sense, women of color are expected to give everything they have to others, to think of everyone else before their own feelings, and that their own thoughts are not their own. Their oppressors feed on their silence like gluttons.

At the time of the creation of this project, I worked for the corporation that built CityCenter. I started in the company as more information about the project began filtering itself amongst the employees. It goes without saying that most corporations believe the end justifies the means. Greed applies to women of color by the mere existence of the feminist hegemony. Feminists often do not care who is made invisible in their pursuit of finding themselves. They do not question or welcome others who might be going through the same identity issues.

This photo combines the images of the Whore of Babylon from the Book of Revelations, as well as the Robot Maria from Fritz Lang’s 1928 film, Metropolis. All women have had two specific labels placed upon them since the beginning of time. They are virgins or whores, and sometimes they are both. The religious subtext of the whore is included. Chapter 17:4 of Revelations states: “And the woman was arrayed in purple and scarlet color, and decked with gold and precious stones and pearls, having a golden cup in her hand full of abominations and filthiness of her fornication.” Since I could not get a doll to hold a golden cup in her hand, I took the image of Robot Maria to do this instead. The Robot Maria was created to incite the lustful desires of the men both above and below ground, which causes the climax of the film.

Obviously, the most popular depiction of the sin of pride is Lucifer’s fall from heaven. In terms of U.S. Third World women, the combined cocktail of having pride, being aware, and questioning people over you invites invisibility, as seen in bell hooks’ “Talking Back.” But instead of falling from heaven, Lucifer accepts his fall from heaven with open arms, and the Strip stands quietly behind, ready to assist him. I climbed a mountain behind my house to capture this shot. It was thrilling and scary, and the only other thing I came away with was a screw embedded in my tire.

Women of color often wear masks to cope with the suffering that they cannot share with anyone else. They must hide their aches, disguise their pain, and trudge through the motions. Homework is the reason for my slothfulness. I am drowning in expectation, but sometimes, I don’t even know whose expectations I am trying to fulfill. The mask in the middle of my dining room table signifies the mask that I wear in public and only take off when I am at home. I added the yellow color afterward in Photoshop, which represents the “yellowface” caricature in Hollywood. As a student of film, seeing yellowface in the film long after blackface was taboo anger me.

Suicide is seen as the ultimate acceptance of mortal sin. It signifies the ultimate refusal of the gift of life. However, the act is sometimes the final coda of a desperate U.S. Third World woman, as seen in Janice Mirikitani’s “Suicide Note.” The actual blood used in the photograph is a nod to Alfred Hitchcock’s “Psycho.” The blood he used was the chocolate sauce.

Charity is a virtue used against women of color. Not only do they suffer the loss of identity when they come to America, but they also suffer crises of miscommunication, lack of control of their immediate world, and much more. But when they ask for it, preconceived notions about charity are placed upon them. Every Friday, there is a man holding a sign asking for money at the eastbound 215 exits and the Strip. I do not know his story, but he embodies the virtue of charity for me. We are all trying to survive, man, woman, and child, black, white, yellow, and red.

There is a part of me that still straddles that fine line of adulthood. There are many young women who do. How does one leave their childhood behind? Is it gradual? Is it easy? Should it be? Should I feel guilty for asking these questions? The rosary is mine. They represent my favorite color and my birthstone, the sapphire. The shoes are old ones from my mother. The model in the photo is my youngest niece Katherina Rachelle. “Will I ever lose these old Catholic blues that direct my shoes” is a lyric from Siobhan Donaghy’s “Overrated” and was the direct inspiration for the photograph.

There are some U.S. Third World women who “make” it. Just by having this class, voices are heard that might not otherwise be heard in a traditional literature class. That is why “Undercurrent” is the perfect title for the presentation. Literature created by women of color is still found under the mainstream even though it has grown by leaps and bounds. This photograph captures that unabashed concentration in their work. In terms of a self-portrait, while the end is unknown on my journey, I need “nothing but song” to keep me going.

To be considered humble is a virtue most prized in a woman, doubly so in a U.S. Third World woman. This is maybe truer when you think about the model minority myth. Social constructs insist upon the virtue of humility in both concepts. But humbleness can be mistaken for silence and used against a woman of color. This is an unintentional interpretation. It was just me and the Arizona desert. I was enjoying the silence, humbled by the beauty and the need to forget who I was for a spell.

No kindness is ever freely given to a woman of color. They are so misaligned and underrepresented that kindness is not a word often associated with them. This is sort of a send-up of the virtue, as dolls are usually a little girl’s best friend. But my niece finds herself rejecting one. Andrea R. Canaan’s poem, “Girlfriends,” questions why women of color do not support each other in this way unconditionally. Women of color so often leave one out, hiding behind the bamboo screens, unable to participate for whatever reason.

America is not known for its patience. We shy away from anything considered abnormal or unacceptable, anything that gets in the way of our own needs without any regard to our fellow man. This is a theme that is seen throughout “Making Face, Making Soul: Haciendo caras.” This photograph speaks to every person, that there is someone out there who believes in them, regardless of birthplace, skin color, sexual orientation, sex, and creed.

This virtue teaches the ability to choose between right and wrong. Quite often, women of color have no choice in the way they grasp the English language. There will always be a mental block as English is not their native language. But they have a choice. They use their native tongue and open themselves up to ridicule for the language barrier, attempt to learn the language and lose their native tongue or even go as far as to create a third tongue. This photograph is definitely an ironic interpretation of virtue and was inspired by the 1999 movie, The Matrix.