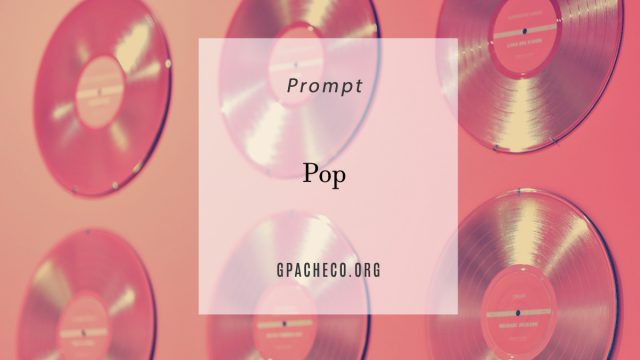 Chopping up a creative nonfiction essay, visually. Hope you like it!

this is a story about how pop music gave me life

get ur kicks on route 66

For as long as I can remember, music has been the driving force in developing my identity as I know it. When reflecting on why music had such a death grip on me over the years, I realized that I literally had no identity of my own. I never understood who I was and where I was meant to be. But music? Music didn’t judge me. Because of my lack of real identity, I’m constantly chasing my reason for being, and my constant assessment of self is through pop culture. I’m still struggling with it. Is it a struggle? I don’t know. Music brought me into this world, and I’ll be damned if it won’t take me out of it.

Let’s start at the beginning, shall we? The Pacheco Family would not be a family as we know it without music. My mother’s family had a group called the DeGuzman Sisters. I’m 85% sure the woman on the far left in the photo below is my Ma. They were heavily inspired by the Supremes and toured the Philippines, China, Japan, Korea, and Vietnam back in the olden times of the 1960s. The story goes on: they wanted the girls in the band to learn how to play instruments, and my dad knew the guy teaching them, so he tagged along to their lessons. In short, that’s how my parents became emotionally entangled.

(sittin’ on) the dock of the bay

My dad was a drummer in a band called the Amulets. He wanted to be Ringo Starr, grew up, and bought a replica of Ringo’s Ludwig drumset with black pearl walls, just like the ones on the Ed Sullivan Show. Still has ’em! He spent most of his early twenties drinking beer and being a foolish young man before my Grandpa Tony shoved a brochure for the U.S. Navy in his hands and said, “you’re going.” At least, that’s how he always told me the story.

We had a bonus room in our Modesto house that quickly became an open-air loft to support my father’s musical endeavors. That was the Thing that everyone knew him for. His setup in the loft was somewhere between a karaoke machine at a Pinoy fiesta and a sophisticated studio with sound panels and a mixing board. There is a fine line to defining my father’s hobby; I’m still unsure how to explain it. His performances were serious business. He recorded himself on cassette tape and felt the entire session was ruined for all eternity… if he could hear us kids in the background. You’d never want to call our house in the middle of a song because you’d learn quickly that “Dad was singing again” and to call back later.

always something there to remind me

first album you ever bought?

“Unforgettable… with Love” by Natalie Cole.

“When You Say Nothing at All” by Alison Krauss and Union Station.

song to announce you?

tune to sing in the shower?

United States of Eurasia / Collateral Damage, or When We All Fall Down, Where Do We Go?

I started playing the flute in elementary school.

I wanted to be like my older sister… but no one told me she played the clarinet. Learning to read sheet music was the hardest thing I had ever done. I had songs in my heart, but I wasn’t great at reading music. Middle school came with its own drama, because, obviously… middle school. My band teacher taught my middle brother in high school before transferring to my school and saw that he was a supremely talented musician, personally speaking to my mother to support his innate skills. He figured I had the same genes. I was an okay student. He told me to take up the piccolo, and I kicked some motherfucking ass on the 1812 Overture in the orchestra. The moment I realized I didn’t want to move forward with flute is when I auditioned to get into a citywide orchestra but they rejected me.

How i hated high school

The transition from middle school to high school was a terrible memory in my life. I don’t think there are any words for the absolute trauma I suffered there. I was invisible for lack of a better word. I always have been so it’s weird to me when people perceive me to be a person. I kept to myself, wrote a lot, tried to make sense of things. They say that your musical tastes establish themselves when you become a teenager. Mine did. That band was NSYNC, and to a greater degree, Britney Spears.

After living my entire natural life in Modesto – and to a greater extent, Union City and Fremont – it was time for me to jump ship. My family slowly migrated East to Las Vegas. Again, I was starving to glom myself onto a musical project. Turns out they were waiting for me. The Killers released “Hot Fuss” almost two months to the day after I moved to town. I poured my heart and soul into becoming their number one fan. It was fun reading press about their come-up because they’d mention streets and locations that I ended up knowing simply by being a resident. There was a bit of a schism in the fandom through no fault of my own – I know it now as a parasocial relationship – and I stepped away. I’ll always be their number one fan. I met a lot of great people when I was knee-deep in our mutual love for the band.

modern dreams in an ancient land, or four albums that established waypoints in the bumpy road of life

I’ve never been the type to judge someone’s taste in music. That’s all it is: taste. Some people taste cilantro; some people taste soap. You love what you love. I never gatekeep. But I do feel like an old woman with a broom in her hand sometimes, demanding these young kids with their beep-boops and doot-doots to get the fuck off my lawn.

I miss enjoying the musicianship of people getting numbers on the charts. Maybe my wildest dreams will come true, and kids in garage bands will start hauling guitars and amps everywhere again. Vocalists will vocalize and not depend on the Autotune to make their sound pleasant. I dare any of these kids today to take on the Great American Songbook and see how far they make it.

I’m still young; it may happen. But until then, don’t throw your love away, I could break your heart any day of the week, and We Are Family. Good night.