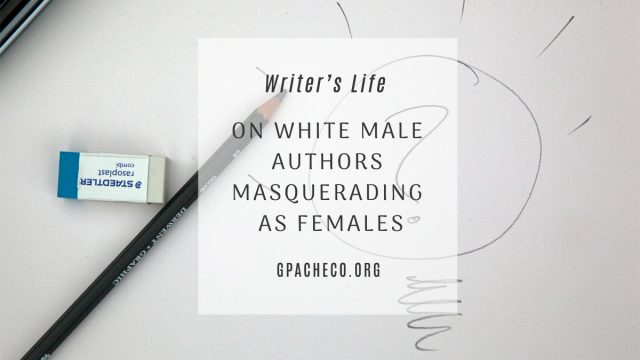 Book Riot’s podcast episode #219 put me on to the fact that Riley Sager is a pen name for a fella named Todd Ritter. Jezebel broke the story.

Every write-up that followed – including Book Riot – made the clipped observation that it’s uncool for men to flip the script and create ambiguous-sounding pen names to sell female-led books to women.

I agree. Full stop. It’s not even up for discussion.

Isn’t it hard enough for a woman (or a woman of color with a decidedly ethnic name, like me) to get someone to pick up their book, much less read it, based on her name? Because it is. It’s the first rule of marketing: have a catchy name.

People outwardly reject what they fear, what they can’t make heads or tails of.

I’m looking at you, He Who Shall Not Be Named.

One of my biggest fears is actually getting published at the Big Five under my own name (and goddammit, I will).

I’m deathly afraid of rejection because people can’t ask to pronounce my name before plodding on and butchering it.

But now I gotta compete with John Smith because his pen name is Florence Jones? So it narrows the playing field.

I already have the entire publishing world against me because I’m a woman of color who refuses to use a pen name.

I don’t want to be “acceptable” or “palatable” for readers.

I believe that changing a name in this way is a form of control.

You are allowing other people to control the conversation.

I’m a writer; I want ALL the control.

Having to fight for space on the shelf is simply part and parcel of being a professional author. I’d rather do it on an even playing field.

Accept the work for what it is, not how I’m marketed because I’m Jane Doe, and you can pronounce that name as easy as you can breathe.

It comes down to this: we have to work harder to dispel the assumption that men can’t write about women and vice versa.

Joss Whedon gets asked all the time about “strong” female characters he writes about.

They’re not “strong.” They’re fictional characters he’s written that happen to be female. Buffy could’ve been a dude. But he didn’t write her that way.

What people are saying when they ask such a dumb question is that women aren’t strong in real life, so we have to qualify his female characters as strong.

Jezebel makes the excellent point that these men are co-opting a female identity, by choice or accidentally, but they don’t have to deal with the problems of being a woman.

Do creeps slide into their DMs asking if they want unsolicited dick pics?

Do they get leered at while walking down the aisle at the grocery store?

Does a “nice guy” comment on their bikini pic with an emoji saying nice (.)(.)?

Do they carry the stain of Eve’s sin, suffering through unwanted pregnancies?

Do they get told, “you’re so pretty; why don’t you smile more?”

Do you want to be a woman to make money? Fine.

Let me share the invisible yoke that all women wear, whether we know it or not, and tell me how it REALLY feels to be a woman in the twenty-first century.