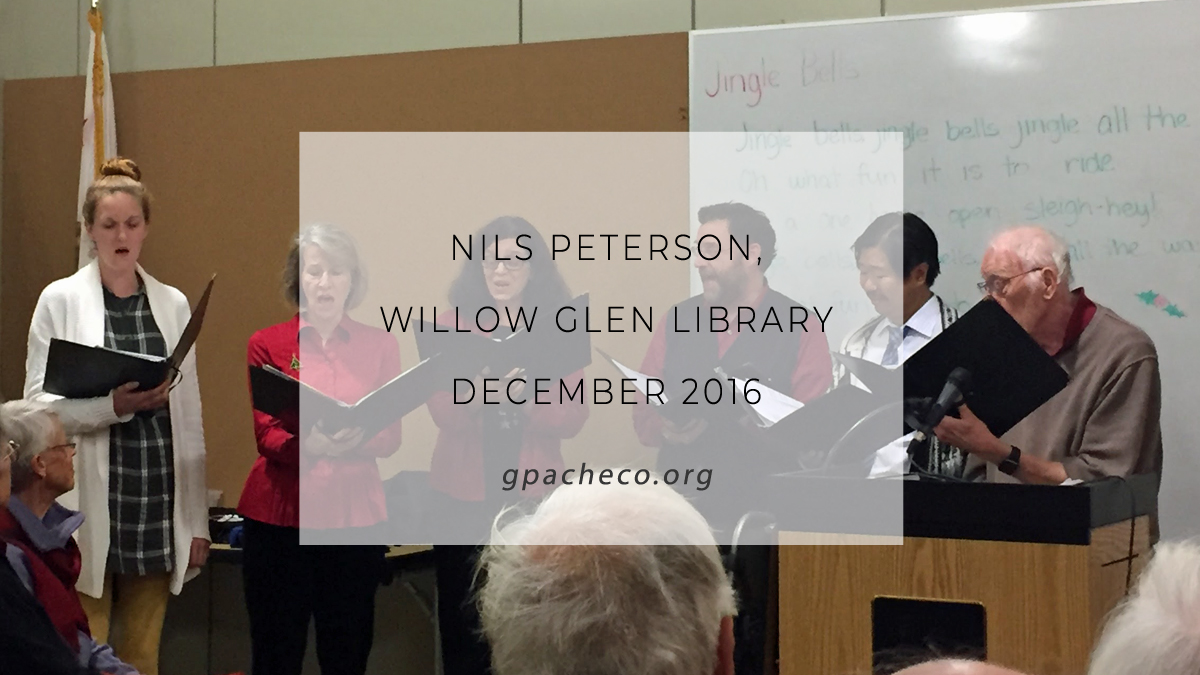 I had the pleasure of seeing former Santa Clara County poet laureate Nils Peterson at the Willow Glen library in December 2016.

I enjoyed his overall style, compared to other poetry readings I’ve been to because he repeated himself. He would recite a poem or a thought and repeat it if we didn’t hear him for the first time. Then, after he would do that, he would take it one step further and comment on it as a dialogue between speaker and attendee. It helped the audience comprehend what he was saying. To me, that was a fun and engaging way to present the material, rather than to intone on it like the work was sacred. He made the poetry accessible in this way.

I think that approach came from his many years of because it felt like he was in teacher mode. His diction was clear and unwavering; his command felt natural and not out of duty or pressure.

Upon further reflection, I believe that the way he spoke is a learned approach to presenting a poem. You almost need to break it down and analyze the poem rather than waiting for it to digest.

The words are on the page with fiction or nonfiction work. The author isn’t allowed to leave things out for fear of losing the reader’s trust. The poet has some leeway to present instant gratification or engage the reader to slow down and stop thinking about what the poet is saying. I felt that it worked perfectly for him.

It was such an exciting approach to the work’s public presentation because I’m a complete dolt when I get in front of a crowd. It felt collaborative. Most readings I go to seem to go out of their way to separate the speaker from the audience with an invisible wall, whether the speaker is aware of it or not. So the reading is a collaborative environment that I was on board with right away.

My only concern is that it all sort of ran together. I couldn’t tell when one poem started and ended. I mean, it’s not like a poet consistently names their poems, sometimes the poem exists, and for the sake of formality, the title is the first line of the poem.

He would start but not officially introduce the poem. He would say something like, “this next one will make you think of Christmas,” or whatever point he was trying to make. He would read it, and it would evoke an emotion or feel from the audience, then he would go on to discuss it in his collaborative way. I’m not the greatest poet, but I would instead delineate each piece to give my audience the chance to breathe as a speaker. Again, it goes back to comprehension by the audience. I believe that sets the tone between chewing and digesting.

One thing I enjoyed is that he didn’t read his work. Instead, he chose a theme (nostalgia for winter and Christmas holidays) and went with that. He read one or two of his wintery poems from his years of writing himself but then went on to share Robert Frost and also read an excerpt from Garrison Keillor’s work. Most speakers are under intense pressure to promote their latest project, but Nils didn’t do that.

That was refreshing to experience. The speaker is not selling you something, and you share in an experience he has crafted using poetry and the platform of public reading. There are tons of ways to do that with poetry; millions of poems exist with specific themes that can interpret how the speaker wants it to fit their goals. Fiction and nonfiction cannot do that. That was fascinating to think about as a writer with not-so-good public speaking skills.

The most exciting part of the evening is when Nils introduced a few people from his choir to come down and sing for us. They perform all over the Bay Area. That was out of the left-field for me, but I loved it! I looked up his biography on the Poetry Center San Jose website, and he is known for combining “his poetry with works of art and music.” It made me think of where a poem stops being poetry and becomes a song. It intrigued me to see what that means to him through his work.

He ended the reading by performing “A Child’s Christmas in Wales” by Dylan Thomas. He incorporated a few other readers to read it along with him. I’d never read it before, but I did some research after the reading, and Thomas wrote the piece for radio. I think that’s what Nils and his team attempting to do, and I think they did it spectacularly. Maybe he was trying to keep the Garrison Keillor feel going by including the piece. But it ended the reading on a good note because Thomas’ work is the kind that lingers in your head. The piece itself worked within the greater scope of the nostalgic Christmas theme Nils had chosen to read to us about that night.

I learned a lot by attending this reading, especially in comparison to the diverse set I’ve heard over the years. There is something about the form of poetry that lends itself to performance and audience engagement. We have that ability, I suppose, within the fiction and nonfiction sphere, but I feel like it’s different from poetry. Nils did an excellent job of giving the audience another way of looking at poetry altogether.