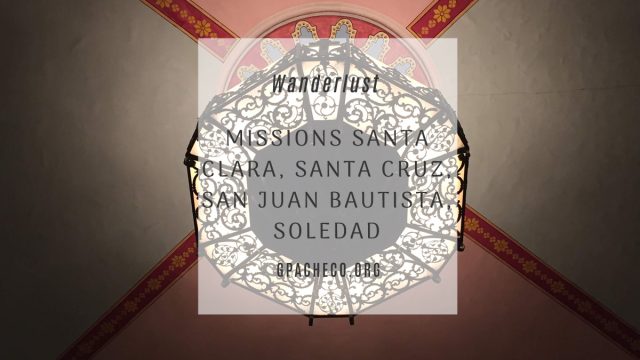 The one thing I miss about Northern California is the ability to make day trips. It’s easy to get in your car, be in the mountains, be in the farmland, be in the ocean, be in Disneyland, be in the desert, all within hours of each other. I don’t miss the commute during rush hour, though. Not ONE bit.

One of my goals in life is to visit all the missions in California, which I did a big chunk of them with my friend A and T during various trips back and when I lived there. For example, I went solo to Mission Santa Clara. I took my mother on the last leg of Northern California missions, which covered Mission Santa Cruz, Mission San Juan Bautista, and Mission Soledad.

Mission Santa Clara is on the campus of Santa Clara University. The college grew around the mission. Finding it was easy, and I parked across the street, so it was free, as was the admission.

My only sadness is that there isn’t an official gift shop; there’s a campus bookstore with some mission-related items, but they were closed for the semester when I went to visit.

Santa Clara was pretty. My favorite area was the rose garden. Per the page on the SCU website:

The walled-off Rose Garden adjacent to the Mission Church is not accessible to the public and commemorates the thousands of Ohlone, Californios, and Rancheros who are still buried here. You can view the Rose Garden Cemetery from the old porch steps.

Their shrines within the worship space were some of the loveliest I have seen so far. They were bright and colorful, and inviting. It had a huge ceiling. I grew up in a humble parish, St. Jude’s in Ceres, and it was a working-class church. Low ceiling, warm, earthy colors throughout. What I’ve always appreciated about the missions is their embrace of the Spanish style with bright colors and sharp architecture. Santa Clara looks humble from the outside, but the inside is a frieze of colors. I enjoyed that aspect.

Mission Santa Cruz was a short drive from San Jose. I will never get over the twists and turns of Highway 17, but it’s the most straightforward way to get into Santa Cruz. Admission was free, as is parking, although as with most Bay Area locations, it’s first-come, first-serve. Remember that Santa Cruz Mission State Historic Park is different from the Holy Cross Church/Mission Santa Cruz buildings that we visited. There is a lovely little plaza/park in front of the Holy Cross Church, and houses surround the area. I think that would be a fantastic place to live, to be able to walk to church.

This mission is unique in its history because it’s been rebuilt several times. Since this is only a replica, there isn’t much to see. Their back garden is small and intimate, with a fountain, a statue of Padre Serra, and a statue commemorating the citizens of Santa Cruz who served in World War II. There is also a strange statue of a native coming out of the ground. It was weird because of the look on his face. He looked happy. Considering what we know of the enslavement of the natives, I can’t entirely agree with the statue being there. But who am I? I’m nobody.

Mission San Juan Bautista was a lovely location. There was so much to see and do there. You could probably take at least half a day or make a whole day of it and explore the downtown area. Unfortunately, we visited on the weekend of their Santa Run, so parking was super limited. We had to drive around a few times before I found a place. Admission is $4 for adults, and they gave my mom the senior discount.

I think San Juan Bautista ranks up there as one of my favorite church spaces. Their altar is humongous and eye-popping, but in its entirety, it still feels intimate. It needs a lot of work, so they are doing it little by little. I donated what I could because the completed restorations and the future ones hold a lot of promise. I hope they’re able to restore it fully.

Their garden was probably one of my favorite things to experience. It had a lot of native plants and roses. I loved that they put the Stations of the Cross in an area of their garden. I had never seen that before, and I think it was a great use of the space.

Another cool thing about San Juan Bautista is The San Andreas Fault Exhibit and El Camino Real Earthquake Walk. It is a small monument represented by a brass plaque placed in this location in 1979 to commemorate the 100th anniversary of the establishment of the U.S. Geological Survey. So it was kind of cool to walk on it, to say you did. I mean, yeah, I’ve driven on the San Andreas Fault by living in the Bay, but that doesn’t replace walking on it.

Mission Nuestra Señora de la Soledad (Our Lady of Solitude) was my absolute favorite of the ones I visited on this trip. Admission is free, and parking is plentiful.

To me, this is the most remote of the missions. It’s far out there. Since I haven’t visited the missions farther south yet, I can’t say if they are as remote as Soledad is. I always equated the Soledad area with its prison. We did end up passing by the jail as we drove up.

There is a laundry list of tasks to modernize the Mission. When you see white adobe walls at a California mission, you know that’s where the borders are. Unfortunately, Soledad doesn’t even have that due to its initial abandonment, neglect, and lack of funds. You can still find bones of the natives, and they had to put up a sign asking people not to pick them up. How sad.

What also sets Soledad apart is that instead of a statue of Jesus or another saint on the altar, it is simply Mary, Our Sorrowful Mother of Solitude. You think you’ve seen every side of the Virgin Mary as a cradle Catholic, and then it takes a short visit to a rural California mission to tell you that you haven’t. Seeing this side of Mary was incredibly humbling.

I’m glad I was able to see this leg of missions before I left NorCal. It was fun to experience with my Ma because she lived in the Bay Area; she was never a tourist. Another fantastic memory about this trip is that she found St. Anthony’s lovely statue (who is next on the list of missions and my maternal grandmother’s favorite saint) at Mission Soledad. It was made in Italy, and Mom talked the gift shop lady down something like $10 because of some dings. I need to learn her haggling ways. It sits in our garden shrine now.