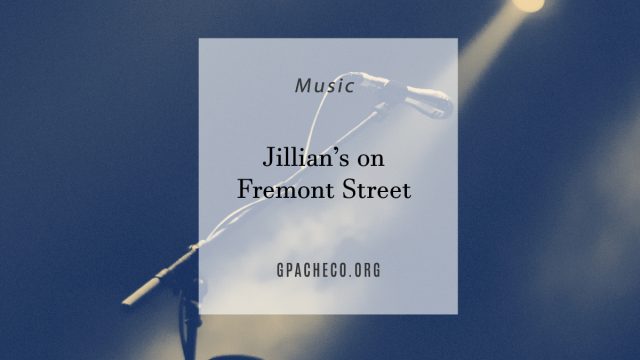 I raced as fast as I could down the highway, trying to find my way in safely. I had never graced Neonopolis with my presence, but I had to trust my gut. Unfortunately, I made one of many mistakes that night: I parked in the parking garage. But I was too excited about the upcoming live show to worry. We were present for the Las Vegas date for The Academy Is… ’s fall tour, Sleeping with Giants, with my niece Cassandra. We had arrived so early that I hoped we wouldn’t end up sleeping with giants.

The energy was electric.

The space that made up Neonopolis and housed Jillian’s was primarily empty. There were no active shops at the time. Unpapered windows danced over our eyes. All you saw were open spaces where shops would be.

A failed French restaurant was right next door, with neon piping lighting the ceiling the connected Jillian’s to it. It made the space look sad as all hell.

A jewelry store overlooking Jillian’s certainly did not have that much foot traffic even to warrant a space there. So I began snapping pictures, doing what a good amateur photographer would do to capture the moment. But, first, I took photos of the massive hole that made up Neonopolis.

Old logos of smacking of neon Americana such as a woman posed seductively, a bowling pin, a car, and Bob’s Big Boy logo decorated the elevator bank that dominated the primary space of Neonopolis. The walls were high, but there was no ceiling. In true Vegas fashion, it was dead at three in the afternoon. The unlit “Eat – Drink – Play” sign looked mournful as it hovered above the lucky ones in the front of the line.

Over the next few hours, the line began to fill up, and the roadies helped conduct sound checks for their respective bands. Then, Cassie snuck away to use the bathroom within the main room and ended up seeing The Rocket Summer’s soundcheck.

Seeing as how I had never been to Neonopolis before (and the fact the doors would not open for another hour or so), I took a walk around as we waited. I could smell the promise that it held, the opportunity to be developed. People always want what is shiny and new.

Soon after, the Academy Is… ’s camera guy, the aptly named Jack the Camera Guy, came through to give wristbands to those who purchased a special package. These wristbands guaranteed our entrance into an exclusive meet and greet with the band before the show. This figures in heavily later, so bear with me. The doors opened, and we got our first good look at the inner bowels of the first floor of Jillian’s.

It was dark and empty, but the air inside was heavy with anticipation.

Metal gates blocked off the gaming devices. Their melancholic aura wafted over the crowd from their open-air prisons. The stage was shored up against the wall opposite the doors and already set up for Sherwood’s opening set. The domination of the merch table by the stairs highlighted brightly colored tour-exclusive band t-shirts and harsh overhead bulbs that barely gave off any light.

And just like the Academy Is… ’s song “Neighbors,”

“I took a step back as the room was filling up and I was packed up against these people who were tossing up a strong vibe.”

William Beckett, Neighbors, The Academy Is…

We leaned against the gate that separated the soundboard from the crowd as we waited for the show to begin. We were there solely for the Academy Is… so the wait was excruciating.

We had to sit through Sherwood before Jack escorted us upstairs to meet the band during The Rocket Summer’s set.

The utilitarian chairs were piled on tables in the radiantly bright room. Several pairs of eyes in the assembled crowd blinked to adjust to the assault on our eyes. The actual meeting and conversing with the band was a blur. It happened so quickly that I forgot everything I would say in the thrill. I am still surprised I managed to get as many pictures as I did.

Afterward, Jack politely kicked us out. As we descended from the brightly lit upstairs to the darkness that enveloped the first floor, I caught a glimpse of a full-service bar with the television going at full blast. Yet we were being banished into the nameless, faceless crowd in the dark below.

The show was all go, no quit. I was impressed with the venue. I have a great love of locations as a former drama student. Jillian’s has a lot of promise, even if the area around her does not.

I originally wrote this in 2007, and the Heart Attack Grill replaced Jillian’s in 2011.