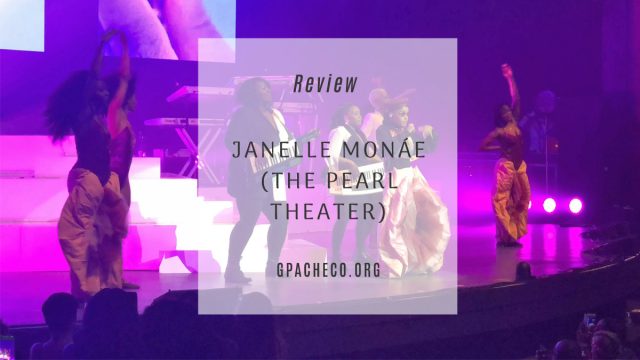 As you can see, a little bit of everything from Dirty Computer, the ArchAndroid, and the Eephus EP. Her energy level stayed high, and we were out by 11 or so. You can’t ask for more from your favorite artists. During the preshow (I thought St. Beauty was supposed to perform, and I got to my seat around 8, and the tech guys were tech’ing), they were piping in Wondaland artists.

I love it when artists showcase their aesthetic in their live shows. It brings together the soul of the project when they do. Janelle worked in the throne from the Django Jane video, the pussy pants from Pynk (which I wish they sold at the merch table!), and her musical breakdown of Purple Rain after Prime Time, a tribute to her mentor, the indomitable Prince. I was also feeling the kinda blunt hat she’s been wearing this era. Very Janet Jackson circa Rhythm Nation.

I hope she doesn’t think our lack of energy at the beginning was a reflection of her. It was Tuesday night and I’m fairly sure 95% of the crowd came from work as I did. But she’s an amazing performer, and she commanded the crowd and her music like a ringleader in a colorful musical circus. Because that’s what it felt like. A glorious celebration of the female identity through music and lyrics and powerful visuals.

I’m glad artists like Janelle exist for odd little ducks like me. I love her Metropolis vibe because of course, that’s one of my favorite movies of all time. I’ve got plenty of family and friends who are queer, and I’m their biggest ally whether they know it or not. I celebrate their energy and uplift them as much as I can in my own way. Seeing her and supporting her was one way I did it.

All in all, Janelle Monáe puts on a helluva show, and you’re missing out on one of the greatest performers of my generation if you aren’t already feelin’ her vibe. Of all her albums thus far, “Dirty Computer” is the most accessible with its heavy Prince influence and cut to the bone political themes that I hope become irrelevant before I die.

If you love what she’s trying to do, work backward until “Metropolis: Suite I.” I love that she created this character to tell this complicated love story but when you dig deep, we’re all Cindi Mayweather inside. There are universal truths in science fiction, and Janelle shows that in her body of work. She’s an inspiration. I hope I can be that way in my own creative pursuits.