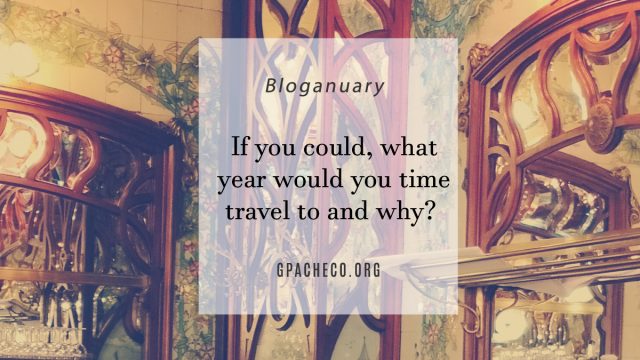 One of my favorite historical eras is the so-called Belle Époque era.

The Belle Époque or La Belle Époque (French: [bɛlepɔk]; French for “Beautiful Epoch”) is the term often given to a period of French and European history, usually dated to between 1871–80 and the outbreak of World War I in 1914. Occurring during the era of the Third French Republic, it was a period characterised by optimism, regional peace, economic prosperity, colonial expansion, and technological, scientific, and cultural innovations. In this era of France’s cultural and artistic climate (particularly within Paris), the arts markedly flourished, with numerous masterpieces of literature, music, theatre, and visual art gaining extensive recognition.

I think it appeals the most to me because of the advance in the arts, as noted above. Art nouveau is so pleasing to my eye. Something about the color schemes and prints you see in paintings and the curvature of the architecture and furniture isn’t something you often see nowadays. It’s synonymous with Paris. Although everyone will tell you that Paris is a shitehole, it’s probably the only place you can see as part of the public consciousness.

Writers such as Guy de Maupassant, Émile Zola, Marcel Proust, Colette, André Gide, and Arthur Rimbaud may be some familiar names. Imagine being around when they published their work. Due to time, we think of their signature works as successful from the jump.

Then we do our research and realize a lot of their things died on the vine, or they didn’t land the way they or their publisher expected. They experienced rejection as much as the rest of us do nowadays, or they were known for their antics more than anything, or what have you. I’d love to see how the publishing world was back then.

I think that’s why I also love the Arts & Crafts movement because art is infectious. It traveled and remixed and became something else.

Something about this picture makes me want to touch it physically. It reminds me of the wallpaper at the McHenry Mansion in Modesto. There’s something organic about it, even though it’s busy as all get out. There’s so much going on you don’t know where to look, and somehow to my modern eye, it works.

I’d also find a way to get to the United States around that time. The Gilded Age took place around the same time, and I love the idea of the Four Hundred. I’d find the wherewithal to charm my way into one of their decadent parties.

On a political level, I’d love to see how everything was playing out. Again, we can do the deepest research dive about a time and a place. Still, none of that hard work will give you an idea of the ground-level emotions unless you somehow come across material history like a journal, diary, or something.