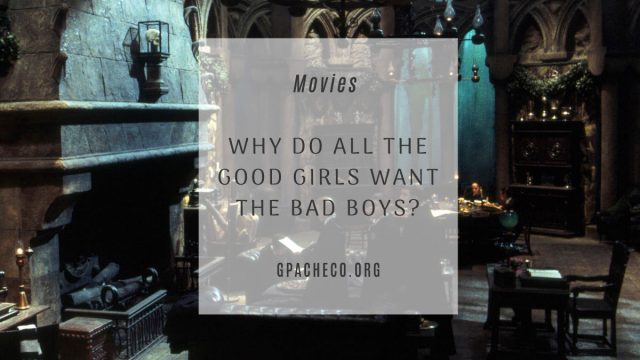 In 2004, I was contacted to assist in the promotion of – as well as providing content for – HPWizardry.com (now defunct). This was one of the articles I submitted for it.

Jo Rowling answered a question about a valid obsession sweeping this world she created with some very sound advice at the most recent Edinburgh Book Festival.

Go for the right man rather than the nasty ones. It took me 35 years to find that out.

So why do the female – and not so female – fans of Harry Potter constantly find themselves drawn to the boys you can’t take home to your mother? It’s all a matter of angles.

Three men that spring to my bona fide fangirl mind are tied for first place as the Ultimate Bad Boy of the Harry Potter fandom: Draco Malfoy, his father Lucius Malfoy, and even Professor Severus Snape. Each was sorted into Slytherin.

That house alone – as you well know – has churned out more Dark wizards than Merlin can shake a wand at. Believe you me, that alone is worth a girl’s heart in Galleons. It also doesn’t help the fact that three fantastic actors have brought each of the three characters to life. Tom Felton is Draco Malfoy; Jason Isaacs is Lucius Malfoy, and Alan Rickman is Professor Snape.

So why does the magnetic allure of naughty boys hang in the air when our hormonal brains decide on who is worthy of the lavishment of our love and attention? Even a few of the actors have gotten into the arena of women lurving the bad boys. In response to an older fan’s marriage proposal at the New York premiere of Harry Potter and the Prisoner of Azkaban, Rickman replied, “She must be desperate.”

Is she? Is she really? Maybe from an innocent bystander, that could be true. Or maybe she was simply wanting to “know what being married feels like” (Britney Spears’ 55-hour marriage in my adopted hometown of Las Vegas notwithstanding). Who better to be married to than the man who brings Professor Snape to life?

One reason is that they embrace the Dark Side and flaunt that badge proudly.

Face it: being evil is sexy.

Look at the first movie incarnation of Dracula, as personified by Bela Lugosi. You’ll have to rent this video from the movie stores kiddies, because it came out in 1931, long before any of us were born. Seeing him seduce Mina Seward was irresistible. Everyone wanted a piece of that deliciously evil power over another human being.

Look at Anakin Skywalker – if I may be so shameless in borrowing from another fandom. He kills Obi-Wan Kenobi without a second thought in the original Star Wars movie. Then again he was Darth Vader, the biggest badass in the whole galaxy. Compare Vader to the Star Wars prequels. How could someone so sweet and innocent slowly morph into someone so evil? At the end of the day, who cares? I don’t because Vader was cool. Give me ultimate villain Darth Vader over goody-two-shoes, angsty Anakin Skywalker any day.

Personally I’ve been drawn to the villains in the stories I read and the films I see my entire life. I couldn’t tell you why. I think it’s because I’m such a good girl. Ask anybody. Villains are usually one-dimensional (take over the world, enslave the world, get revenge on the little scarheaded boy who is the bane of your existence, you know the drill), but there’s always a method to their madness. They always give a monologue on the singular event or person that caused them to turn irrevocably evil.

Perhaps Jo will treat us to said monologue with the proposed Book 8, the ever-elusive Harry Potter encyclopedia? It’s satisfying to see them get their comeuppance in the end too. You see it coming and there’s the collective sigh rippling through the crowd of “Aw yeah. You got what’s coming to you!”

This all leads me back to my original question: why do all the good girls want the bad boys? We’ve got our own reasons. For me, it’s that we’ve been brainwashed into believing evil is sexy. Draco and Lucius Malfoy, and even Snape remind us of that.