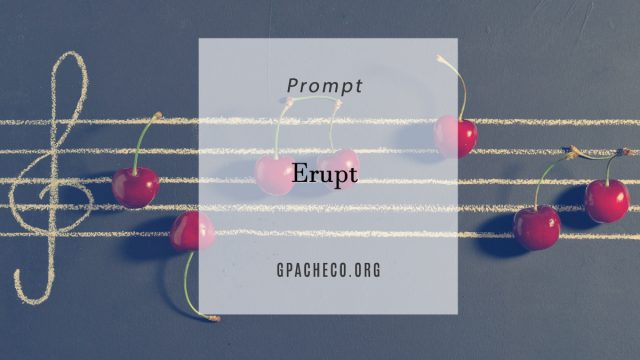 “You don’t look so good,” she stated.

The sweat pooled in the small of his back, warming the tailbone he nearly broke last year.

“Yeah?” he asked. His tone was light, and passive.

Every sinew in his body was demanding that he become confrontational.

“Maybe I could just take a seat; my heart’s a little,” he offered. He mimed the erratic rhythm of the ventricles in his barreled chest with his left hand.

“Ooh yeah, go ahead, we don’t need you right now,” she said, shooing him back.

He stared blankly at the space between his present location and the exits. Their plastic boxes brilliantly lit around the clock, wondering if there was a way to extricate himself from this infernal situation. The emergency red filled his eye sockets like an ocean. He always did bring this on himself.

He was tired of calming the next eruption when something doesn’t go his way. So, like a dyed-in-the-wool Millennial, he’s done the heart work, naming, shaming, and grieving over who he is as a functional human being. He knows what his weaknesses are; he knows where his strengths lie; he knows his value.

He looked up. It wasn’t his cubemate, but his manager. His face remained unwrinkled. He knew that look on her face, the one feigning sympathy. He had seen it too many times over the years. Years! He’d been here for years, he realized.

“I know that wasn’t what you wanted to hear,” she began.

He stared at her and said nothing as she continued, her voice low.

“But we need you to be a team player, okay? You said you would work on it, but I do not see any improvement.”

The pain in his jaw was excruciating. “All I can do is try harder.”

“Maybe. Or maybe it’s time to rethink your employment with this company.”

Now she’s threatening him? He knew the minute she replaced his previous manager three months ago, she would try to clean house. She must’ve picked up on his vibe.

“I told you I would work on it, and I will,” he repeated.

He visibly cringed, but she didn’t seem to notice. That was her go-to phrase, an unimportant string of words to express her discomfort or confusion about the conversation’s trajectory.

Something needed to change.

Someone needed to change.

He was exhausted at the mind games. Did he have the audacity to take her on? He wasn’t sure. He’d go home, maneuver through hordes of traffic, choke down leftovers, and sink into his couch to fall asleep before 8:30, reruns playing in the background.

Same as it ever was.