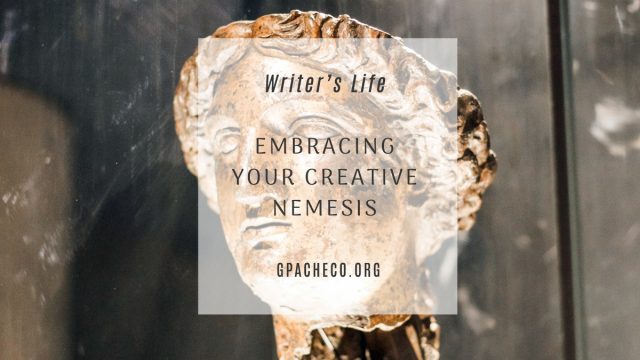 I’m not a devout follower of New Age thinking.

I’m a cradle Catholic, but I have a hard time believing that God doesn’t give us the tools to explore other ways of thinking. For example, my Ma always had Buddhist and pagan symbols in the house while insisting we go through baptism, first communion, and confirmation.

She always said if one doesn’t protect her, one of the other ones will. My friends growing up were practicing Wiccans at one point. I have crystals and practice meditation. I resolutely walk the fine line of spirituality though firmly grounded in my faith.

It’s human nature to have negative thoughts and feelings. I think many faith and spirituality miss the point where you’re not supposed to feed into it. I recently found out that it’s called toxic positivity. You’re supposed to be this constantly happy person. That’s tiring! The only way we can grow as creatives and artists and writers and painters is to heap our miseries on a nemesis.

Maybe you’ve heard of the Ursula K. LeGuin short story, The Ones Who Walk Away from Omelas. It’s one of the stories I read studying English literature that made me appreciate short fiction. It put me on the path to be a short fiction writer, for sure. You may be able to find the fast online for free. But obviously, support Queen Ursula.

Roxane Gay began speaking on her nemesis on Twitter (as summed up in this HuffPost article), and I was so intrigued by the thought. There’s something so simple about it.

I’m proud to announce that I have a nemesis myself. They don’t know I exist.

I like wallowing in my negative thoughts, but I know that it does no good to cling to them for my mental health.

That’s where my nemesis comes in, stage left. As a result, they bear the brunt of my impure thoughts without actually being burdened.

That’s probably a personality flaw of mine. I’m known for holding onto things inside so long that they fester and cause severe emotional damage.

Honestly, I’m a cheerful person. I have a resting face that scares people away, which is fine. Adhering to social distancing has never been a problem for me.

But heaping my mental grief on my nemesis like they’re the child in the basement makes Real Life so much easier to digest and power through.

So, I invite you to do the same.

You don’t need to name names. It can be a celebrity, someone you know in real life, maybe your childhood bully.

But whenever you’re feeling low and petty as hell, turn back to your Child in the Basement and let your nemesis HAVE IT.

Your mental health – and creative well – will thank you for it. I feel confident that this could be a valuable tool for you too.