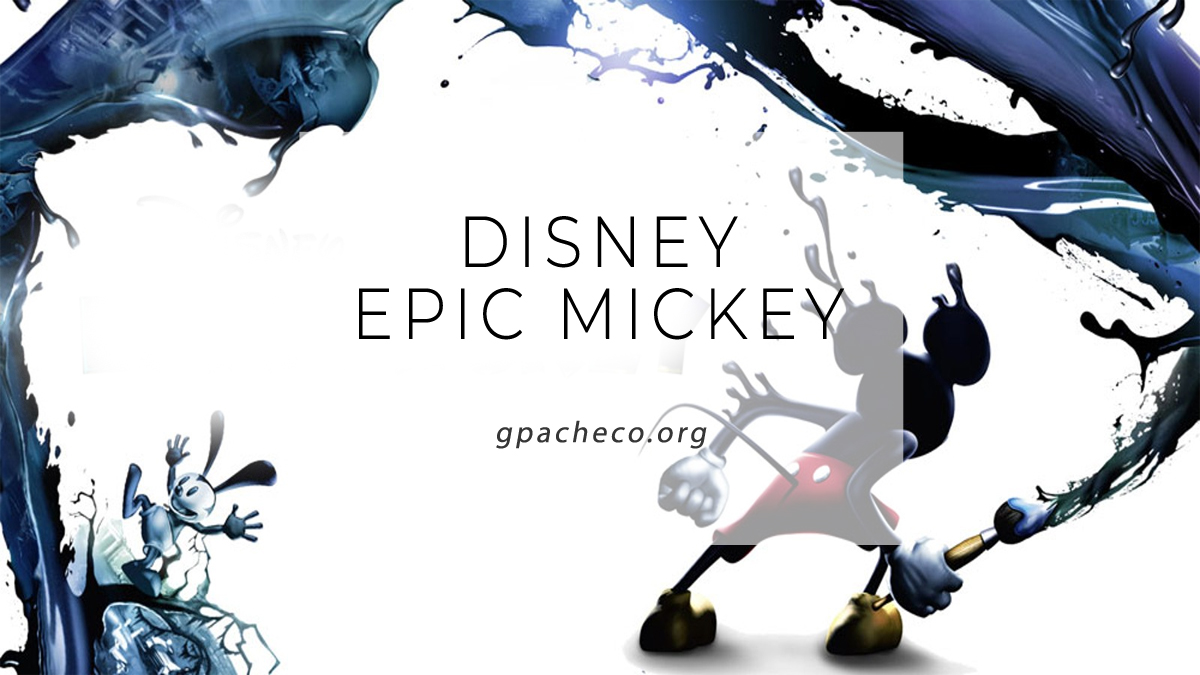 The pre-game storyline is engaging. After falling asleep while reading “Through the Looking Glass” by Lewis Carroll, Mickey finds a way to walk through the mirror in his room. He sees a pot of paint and a paintbrush left behind by Yen Sid (the sorcerer from “Sorcerer’s Apprentice”), who had departed for the night.

Being the curious mouse he is, Mickey gets all up into it and messes up Yen Sid’s creation. Yen Sid had created the Wasteland – with its clear nod to Disneyland – but for all the forgotten characters that the Walt Disney Company has made in its storied history. Their leader was Oswald the Lucky Rabbit, Mickey’s older half-brother and predecessor.

Mickey accidentally creates the Shadow Blot. Knowing he did wrong, Mickey escapes back to “the real world” and forgets about his little trip through the looking glass. In time, Wasteland is ruled by the Shadow Blot, alongside the Mad Doctor. Together, they have perverted it, enslaved the toons, the Gremlins, just did terrible things. The Shadow Blot pulls Mickey back through the mirror to steal his heart. Toons in Wasteland cannot cross over to “the real world” because they don’t have their hearts. So it will give them a chance to enter “the real world” and take it over by stealing Mickey’s heart. Mickey realizes what he’s done, and being THE Mickey Mouse; he decides he has to fix things. Then the game begins.

My only complaint is the camera eye. When I jump onto a ledge, rock, or whatever, the camera doesn’t automatically catch up with me. I have to wait a few seconds, and during those precious seconds, I’m being beaned by Sweepers or ink tentacles will come flying out, etc.

I’ve read a couple of reviews for the game by other people, and I’m afraid I have to disagree. We all agree that the camera is messy. And the constant reminder that Mickey has some of the Blot in him (when he stands still, ink evaporates out of Mickey’s ears) was a little annoying too. But – if the final scene is genuine- I think it was a subtle reminder that there will be sequels. These things can be fixed or toned down. Also, this is the Wii. It’s not a PS3, nor an Xbox 360. Come on now. No biggie.

But I think the graphics are fantastic. It’s not supposed to be a smooth, beautiful world. The choppy and imperfect Wasteland wasn’t meant for the primetime. It’s to house forgotten characters, and it’s not going to be perfect. I will say I was slightly disappointed that there were corners on Mean Street. Walt didn’t like the idea of corners, so if you go to Disneyland, you’ll notice the “corners” on Main Street are all rounded off. Every time I go there, I make a point of looking at them.

The animation style of the cutscenes is impressively smooth and colorful. You’d have to see it for yourself. Powerhouse Animation did them. They have a specific retro look, and they are flawless.

You leap through projector screens as you transition to different lands via old cartoons of both Oswald and Mickey’s. They’re a challenge because you have to collect the film reels within each level in order to unlock them to watch the full-length short in the “Extras” screen on the main menu. In my first go, I opened “Oh, What a Knight” and “The Mad Doctor.”

Other reviewers have noted how annoying it is to have to go through the projector screens in order to get to the different lands. I agree. You can’t go from Bog Easy to Tomorrow City (or whatever) without passing through the cartoons to get to Mean Street and then leaping through the projector screen for the appropriate land. And some of the comics go on and on. They get progressively more challenging as the game goes on. But in a way, it’s somewhat reasonable. You can collect E-tickets, and any film reels you blitzed past in order to get to the end of the cartoon.

Yeah, here’s a tip from me to you: collect any E-tickets you can possibly get your hands on.

The gameplay is a little tricky. For example, when you’re side-scrolling through the cartoons to get to another level, you’ll jump but you won’t land right where you expect Mickey will land. So you end up missing your mark and getting beaned by water or poked by a needle or something. It gets annoying the first couple of times, but then you adapt the gameplay to suit what you want Mickey to do.

Other reviewers have mentioned how you can nuke an entire land with Thinner (like OsTown or Ventureland), come back and find your hard work all undone. However, the game doesn’t forget. Whenever you throw out Paint or Thinner, there are consequences to your actions in Wasteland. Paint turns toons good; Thinner can change the outcome of a Boss level (like Petetronic or Captain Hook).

I personally beat Petetronic in Tomorrow City (with his kickass nod to the MCP in the original “Tron”) with Paint because I wanted to see him do good. And at the end of the game, he does. Mickey’s trail of destruction – or construction – is reflected in the end credits. Unfortunately, I did not rescue animatronic Donald, Goofy, or Daisy. I was too wrapped up in trying to finish the game. In the end, what happened to them broke my heart, and now I’m going to replay the game to rescue them properly.

Gameplayers who write it off for the younger crowd are wrong. This game is NOT for anyone eight or more youthful. It’s definitely for the Disney geek, the one who is aware of the history of Disney, for the nostalgic, and for those who simply want to see cookie-cutter Mickey Mouse battling some creatively awesome villains. The sheer history of Disneyana within the game would confuse a kid unless they did some serious homework.

I’ve been studying the history of Disney for years now, so I know there’s lore that went over my head. But, also, if you gave this game to a kid, I guarantee you they’d have freakin’ nightmares over the Shadow Blot, the Blotlings, the Mad Doctor, etc. Every time the Shadow Blot showed up and opened his craw, growling like hell at me, I was like, “I’m gonna die, I’m gonna die!1!!”

And can I just say I have a profound respect for Oswald because of this game? I knew him in passing. There’s a really heart-wrenching scene when Mickey sees the statue of Oswald and Walt holding hands for the first time on Mean Street U.S.A. Walt and Mickey’s statue is doing the same thing at the end of Main Street U.S.A. in Disneyland. Mickey’s face contorts, and it’s like, “aww.”

And throughout the game, Oswald will say something along the lines of, “he always liked you more” (“he” being Walt). Oswald has been reborn as this amazingly complicated character. He was a star in the early pantheon of Disney animated films, and today, who truly knows of him? I know they’re trying to seed him back into the parks, and everything, since the Company got him back a few years ago. Their relationship is like Fredo and Michael from “The Godfather,” only not as sinister. Mickey didn’t choose to become this beloved character; it just sort of happened. It wasn’t his fault. Yet Oswald was resigned to the bedroom of history (and Universal’s film vault) until this game.

I highly recommend this game. Period. There are little things within the game that are nods to the all-around Disney experience: theme parks, classic cartoon characters, the music. I found myself humming along with the soundtrack because James Dooley incorporates a few traditional Disney themes. Also, there are so many ways you can end the game (depending on your use of Paint and Thinner). I think that ups the replay value.