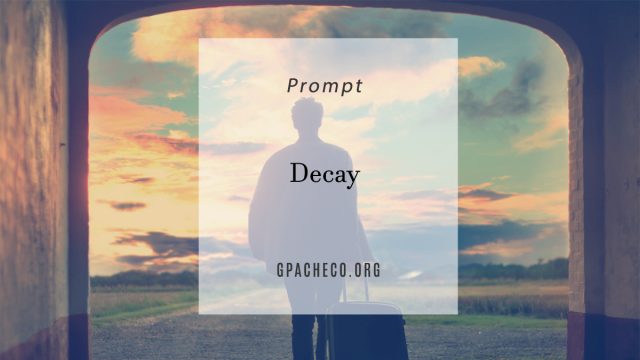 I’m keeping this prompt thing going in February! Only this time, my writing exercises are influenced by the Writer. I feel like more stuff comes gushing out of me when I do prompts. As long as someone lays it out for me, I’ll do it!

This is what it meant to decay like a child with consumption in a Victorian novel set on the moors of England. Her entire world was crumbling beneath her feet, and she wasn’t sure where else to go.

He hadn’t said a word since yesterday. How can someone act so nonchalantly with the venom of silence? He weaponized his lack of words into a shield from her love and affection for this hulking human being who was great in bed and couldn’t cook pasta without burning the water. Yes, you read that right.

Maybe it was time to pack a bag. Stay in a hotel somewhere. She didn’t know anyone else in town except for the ladies at work, and they were all wifed up and fat with healthy babies and responsibilities. No one wanted a car crash of a coquette on their couch, eating ice cream and crooning along to Mariah Carey tunes.

But this was her house too. She had as many rights to exist within its walls as she did.

But Indy was his town. His supporters would come out of the woodwork and shun her for looking both ways on a busy street.

But the excruciating weight of being here made her choke on the humidity in the air.

She could hear her mother’s cool voice on the other end of the phone already.

“I’m not going to say ‘I told you so,’ but I told you so. I told you he was no good for you. Pressuring you to move across the country. And no proposal! Pfft!”

Dad was in the background. “I’m gonna whoop his ass if he shows his face on Chesapeake Avenue ever again. Just you wait. I got a big backyard and a shiny .357 bullet with his fucking name on it!”