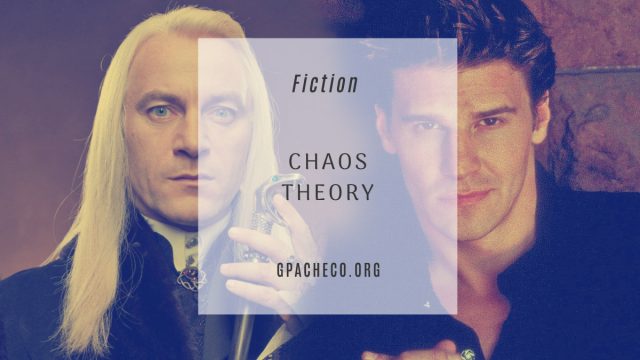 Lucius Malfoy simmered in his son’s Italian villa. Why he had allowed Julian Sark to stop him from performing the Avada Kedavra curse on Angelus or to stake the bloody git was beyond him. His heart ached. He yearned to get one back for his family.

The sole survivor, Lucius P. Malfoy, the very same one for whom he was named, locked himself in a crawl space with the house-elf Dobby during the bloodbath. He didn’t emerge for nearly three days in fear that the vampire was still afoot.

When his ancestor emerged, his family was dead. The drifter vampire that ingratiated himself within their home murdered them like a chattel for a slaughterhouse. A diary Lucius P. kept was a grave reminder of that terrible time.

“Father?” Julian questioned as he set the tea on the table between them. “You’re not still on about Angel, are you?”

“Yes,” Julian replied, exasperated. It was pretty childlike how his father had reached a fever pitch at discovering Angel’s history and how intertwined he was with the Malfoys. It was like the Dark Lord with that Potter boy. Personally, Julian was all for keeping grudges, but they needed things from Angel. Revenge would come later.

“Don’t take that tone with me, boy,” Lucius growled, his gray eyes flashing.

Lucius stood up suddenly as if someone had pricked his backside with a sharp pin, upsetting the teapot. “Have you no sense of pride at being a Malfoy? Have your ambitions clouded your family ties all this time? Have Narcissa, and I taught you anything at all?”

Julian stared into the deep abyss of his father’s eyes. It was rare that they could bring him back once he had a mind to do something. But, though he wasn’t a Malfoy by blood, he was as close as one could get.

“It’s because of your guidance and your love and your respect that I am where I am today. Irina Derevko, Arvin Sloane, meant nothing to me. My loyalties are flexible, but not where my family is concerned. You, Narcissa, and even Draco are the only true family I have ever known. I am grateful for that.”

Lucius breathed heavily, adrenaline coursing in his system. He walked away from the table, shoving aside the mahogany chair. The elder Malfoy gazed at the waves that were crashing on the rocks below. Julian watched silently, hoping he had defused the bomb, as Lucius gathered his thoughts.

“Yes, Father,” Julian replied automatically. “But we cannot lose sight of the goals we’ve set. The Dark Lord is pleased, as is the Covenant. Not much longer, Father, and we will come out smelling like roses.”

“No, no,” Lucius said, waving that idea from the air. “I want him dead. Tortured, then staked. By my hand.”

Julian sighed inwardly, proud of his negotiating skills. Anything was liable to set Lucius off at any moment. Julian shuddered, remembering the near-destruction of the Dark Lord after delivering the Avada Kedavra curse in Godric’s Hollow. But that was a distant memory. Julian pushed them from his mind in favor of the execution of their following plot.