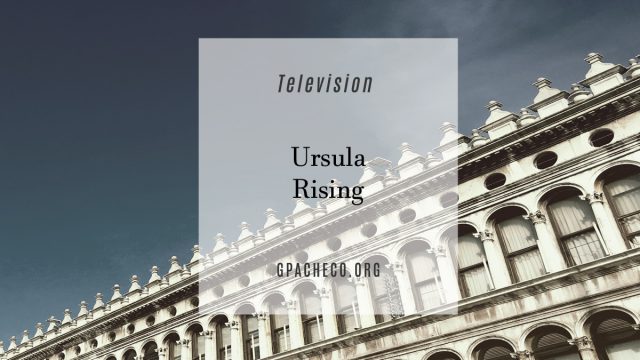 Let’s make one thing clear: Ursula Bonadeo is a fictional character in the greater scheme of Borgia history, a composition of the women Cesare romanced during his time. However, I have a humongous problem with her. She is the weakest female character on the show, and poorly constructed. I don’t blame the actress Ruta Gedmintas. She is doing her job by working with the script and direction given.

Ursula is first introduced as the wife of a nobleman. They meet at the wedding reception of Cardinal Cesare Borgia’s sister Lucrezia to Giovanni Sforza. They dance together, even after Signore Bonadeo spent time insulting Cesare’s mother Vannozza by calling her the “Spanish whore.” With downcast eyes, her parting words were “liberate me.” Cesare sees this as an opening and pursues that which he should not have.

Cesare plans his revenge on Signore Bonadeo, which only he will enjoy the fruits of his labor from. The revenge is twofold: he will clear the field for the insult of his mother, and be free to seduce Ursula freely. After a short sword fight, Cesare succeeds in murdering Signore Bonadeo. His condottiere Michelotto assists in dumping the body.

During a passionate week and a half affair, Ursula and Cesare fuck like bunnies. Ursula tells Cesare of her reservations about their fuck sessions. I am sorry but you knew full well what you were doing when you were lying on your back. I find it impossible that you are feeling emotionally conflicted when you told a grown man to “liberate” you. There’s no turning back from pursuing your forbidden fruit either, Ursula. Either you own it or don’t even start something.

Eventually, Signore Bonadeo’s carcass washes up on the shores of the Tiber. Ursula quickly puts two and two together and gets “thee to a nunnery!” She becomes Sister Martha believing she could wash away the guilt from breaking her marriage vows. True, getting divorced was an impossible thought during that time, but in the same token, being conflicted about cheating is a silly thought.

The reason why I love Giulia la Bella (played by the egregiously beautiful Lotte Verbeek) is that she is unrepentant in her passion. She knew exactly what she was going after when pursuing Pope Alexander. I much prefer a woman who wields her sexuality in a way that pleases her, not anyone else. Giulia was unhappy in her marriage but she shared no such reservations.

Perhaps the juxtaposition of both the love affairs of the Pope and his son played out during the first series sets up a few facts. Cesare will never be like his father, as he carries the Borgia name. Those who know their Borgia history know how this will end. But could they not have chosen a better way to play out Ursula’s story? If she was so quick to give in to her emotions, I don’t see how she could give herself to a religious life that housed His Sinful Eminence.

I am not giving Cesare a pass either. If he was a stronger man, he would have stood up to his father and refused the position of Cardinal. I honestly believe he would have been free to pursue Ursula without the bonds of religious life. The spirit is weak but the flesh is willing, as the cliché goes. But the Pope instilled in his son a great sense of a fearful love that will follow him to the end.

I cannot believe with all the scholarship in the world, women are still seen as the uneducated virgin that must be protected from the evils of the world, and the oversexed whorish plaything waiting to be violated because they can. Men and women alike continually project two-sided sexual machinations as being the fault of the woman. This is especially problematic on a television show produced in a time period that actually existed in history.