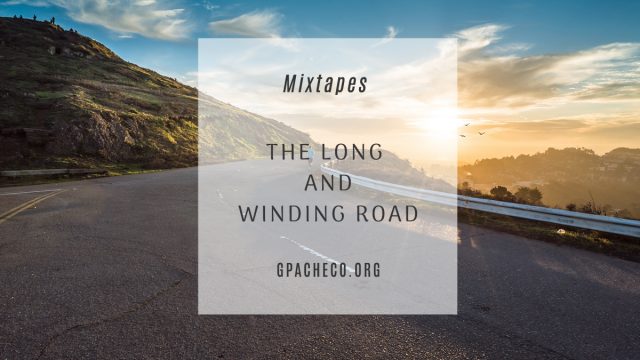 When I built this mixtape, I challenged my followers on Twitter to inspire it. We agreed on the theme of traveling and wanderlust. Enjoy!

For obvious reasons, this is the best opener for a mixtape about global wanderlust. We become cynical about the themes as soon as it invades our ears. The idea behind is archaic and dated. But the spirit of the song will always ring true, from 8 months to 108 years. Besides Kris told me to open the mix with it lol.

We Gotta Get Out of This Place – The Animals

My parents grew up during this era of music. The Animals have always stood out to me. My dad preferred the surf rock of the Searchers, the Zombies, etc. and my mom was into girl groups, like the Supremes. Their arrangement of “The House of the Rising Sun” reverberates to this day, mostly because of Eric Burdon’s vocals. “We Gotta Get Out of This Place” was written for the Vietnam era (coincidentally I did a big report on the Vietnam War and chose this song to represent the mixtape), but it’s still an important song.

This came from the Donnie Darko soundtrack and was written and originally performed by the fellas in Tears for Fears. This arrangement is haunting and gripping. Upon Kris’ suggestion, I thought it’d be a nice, emotional damper after the almost upbeat cynicism of “We Gotta Get Out of This Place.”

I’ve been following Mylin’s career off and on. She started on MMC, did some records in Japan, and went indie when her contract was up with Avex Trax. She’s done a few indie albums (she’s on hiatus at the moment), but this song always stuck with me. It’s just her voice and her guitar, telling a really bittersweet story. You can almost feel the breeze from the open window of a car as you drive down the wide-open road whilst you’re listening.

New Order. C’mon, what can you say? Like “Drive to Nowhere” it’s very much a road song that isn’t necessarily about driving on the road. It’s about living life with someone special. Maybe it is a traveler and an open road. It’s got that almost blinding drag race feels with the twangy guitar that is indicative of their sound.

Marz suggested this song. I was almost going to put “Escapade” but I had to agree that “Runaway” was a better overall fit. It also had a better vibe to follow “60 Miles an Hour.” I still remember watching this video on MTV. Ahh, so cool.

Life is a Highway – Rascal Flatts

This is the Rascal Flatts version but Tom Cochrane’s original still stands the test of time. The first time I watched “Cars” and this came on, I knew immediately it was the perfect song for the movie. I love the arrangement. Very much like Tom’s but it’s still got that Rascal Flatts’ country flavor to it.

Take Me to Another Town – Emma Bunton

“Take Me to Another Town” is a cheeky song. “There are too many people who would kiss me if they could.” There had to be a playful song. Like Professor Tolkien said, “not all who wander are lost.” What’s traveling if you don’t fall in love with someone? When I was developing the mix, I knew this song had to be on it somewhere. Sandwiched between “Life” and “Hawaiian Roller Coaster Ride” was almost too perfect. Emma’s two solo albums have been very sixties, blue-eyed soul, and it feels like a song Nancy Sinatra or Dusty Springfield might’ve sung, had it been written in their time.

Another Disney song, haha. I can’t help it. What I wouldn’t give to be in Hawaii and surfing. Well, I’d have to LEARN how to surf, but ya feel me. I know you do

Eh, Eh (Nothing Else I Can Say) (Bollywood Remix) – Lady GaGa

I know what you’re thinking, you’re only putting a Lady GaGa song on this mix because you’re a stan. NO… well, yes. I love the Bollywood remix because it makes me feel like I should break into some awesome synchronized Bollywood dancing. It’s very summery and light-hearted and sounds awesome with the Hawaiian lead-in.

Down in New Orleans – Dr. John

“The Princess and the Frog” is one of my favorite Disney movies. I saw it for the first time with A and T, and loved the visuals and the music. Not to beat you over the head with history but the twenties were a very important time in feminism. Women were standing up and letting their voices be heard. Obviously it wasn’t the Civil Rights Movement but they were starting to at least make little waves, if not tsunamis. Tiana’s story very much fits in with that time period. Dr. John’s version of “Down in NOLA” just sends chills down my arm, which is, as you know, my indication a song is AWESOME. I don’t romanticize the area but as a student of history, I’d love to experience walking through there someday.

It Happened in Monterey – Frank Sinatra

Just a classy love song from ol’ Frankie. There’s something about this song in this mix that makes me wanna get up and dance with the spiffiest guy in the joint. And I live in Vegas. There are hot guys in nicely tailored suits everywhere lol.

I like the pensiveness and low-key dream-like anxiety in the song. I thought it fit well with the other songs. It captures the inevitable doom of a long-distance relationship.

The Long and Winding Road – The Beatles

How could I name a mixtape after this song and not include it? haha. We have a clock in our house that plays a pop song at the top of the hour. This is one of them. It’s kind of nice to hear it play in the house when you least expect it.

I’m sure you thought that if I was gonna name the mixtape “The Long and Winding Road” that I would end it on that note. You’d be wrong. I wanted to leave you on a positive note. “The best times are yet to come.” So even if you can only live vicariously through the music, at least you know there’s a big world out there ready to be experienced.