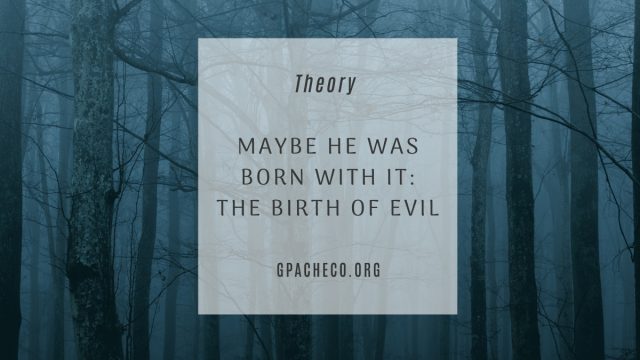 The source of evil has been a source of inspiration from the earliest of literary traditions, to even more modern staples, such as film. They range from varied characters such as Grendel’s Mother in “Beowulf” to Dorian Gray from The Picture of Dorian Gray (paid link) and even more recently, through Lord Voldemort from J.K. Rowling’s Harry Potter (paid link) series.

What makes a fictional character evil? There are many reasons and explanations. It could be their birthright as shown with Grendel’s Mother, being a member of Cain’s kin. Maybe it was his own vanity that made him so, such as was Dorian Gray’s case. Or conceivably, it was a combination of the two, as well as the dire circumstances throughout life, as we learn about He Who Must Not Be Named.

To be inherently good such Beowulf in his self-titled poem, and Yvain in “Yvain, or the Knight with Lion (paid link),” seems so one-dimensional to me. You know what they are going to do because that is all they are known for. They hardly ever stray from the path of goodness. Beowulf had his reputation to uphold and did it easily. Yvain stumbled on the path to goodness, but not once did he stray from it.

On the outside, villains may seem incredibly one-dimensional. But they have a chance for redemption and salvation. Some villains have a greater chance more than others, of course. I prefer to question what makes one evil. In this essay, I will scrutinize one of the oldest literary presentations of wickedness, Grendel from “Beowulf,” along with the most supreme evil in the entire film universe, Anakin Skywalker from the Star Wars series. As a student of film and admitted lover of villains, I could not think of anyone eviler to compare than Grendel to Darth Vader.

When we first meet Grendel in “Beowulf (paid link),” he has become a long-standing problem of the king Hrothgar. For twelve years he has feasted on the subjects of Hrothgar uncontested, bringing the king nothing but pain.

“Grendel was the name of this grim demon/haunting the marches, marauding round the heath/and the desolate fens; he had dwelt for a time”

Hrothgar had tried to send his best knights after the unholy beast, but no one was strong enough to complete the task. Grendel was supposedly descended from Cain, the Biblical character who was cursed with walking the Earth after murdering his brother Abel.

The actual account of Grendel’s birth is shrouded in mystery. The only lines within the poem giving any explanation for his birth is that

“from Cain, there sprang/misbegotten spirits, among them Grendel”

As readers, we have to accept that without question. All the author cares for us to know is that he was born and he is a terrifying, man-eating monster. I suppose the implication we are to get from this is that Grendel’s source of evil stems from his birth as a descendent of Cain. But we do not have anything within the poem that implies that Grendel’s Mother gave birth to him. Her only name is Grendel’s Mother. She is not even worthy enough of a name or a separate identity from her son.

The details of Grendel’s birth mirror that of Anakin Skywalker in Star Wars, Episode I: The Phantom Menace (paid link). Shmi Skywalker explains to Qui-Gonn Jinn that

“there was no father. I carried him, I gave birth, I raised him. I can’t explain what happened.”

His mother had lived a rather unremarkable life until his birth, that of a slave on a foreign planet. Despite these hardships, a life was created within her that she carried to term, and cared for as her son.

While decidedly a pagan poem, “Beowulf” contains language referring to a higher, religious figure. While the Force itself is not so much a religious body, one could view the institution of the Jedi Order as a religion. If a higher, uncontrollable power wills it, a birth can occur. The Biblical idea of virgin birth could be used to explain both Grendel and Anakin’s creation myths. What is implied by the birth of both characters here is that something greater than what man is capable of creating them. The nature of the Force birthed Anakin Skywalker. It was so strong that it had the power to give birth to a man. The curse bestowed on Cain for murdering Abel was so powerful that it birthed an evil that would become the creature known as Grendel.

Regardless of the virgin birth idea, there is a notion in modern times that it is completely unnatural about a woman becoming pregnant without a man. We know with advances in education and science that it takes a man and a woman to bring a life into existence, whether naturally or artificially. When we read or hear of villains or heroes being born magically, we never stop to compare it to the real world. This is simply because magical realism does not exist in the real world.

That is why I believe it so effortless to create characters without fathers in the film and literary traditions. It is so uncomplicated to explain why children from broken homes, bastard children of mothers, and orphans have it hard and become villains in their adulthood. It is much harder to explain why villains are villains in modern times if they came from a good home. Of course, the idea of “good home” is open for further discussion that will inevitably occur when it comes up in essays such as this.

Moving on, death seems to be a powerful motivator for committing evil acts. A major part of Grendel’s appearance in the poem is his death. We only hear stories of his malevolent acts from Hrothgar and his people, but we hardly ever read of them within the context of the poem. I suppose that is why the poem is called “Beowulf” and not “Grendel.” After the celebration of Beowulf’s promise to eliminate Grendel, the monster returns to Heorot to exact his revenge for the party. The religious music they had played had driven him mad. Being the offspring of a man cast away by God for killing his own brother, I can see why that would be a problem.

Grendel makes short order of the others who are asleep in the hall. Just as he was about to attack Beowulf,

“the alert hero’s/comeback and armlock forestalled him utterly”

Both Beowulf and Grendel grapple together, trying to best the other. They wreck Heorot in the process. It was not until

was Grendel eventually defeated. His arm became a trophy for all of Heorot to see:

“the hero displayed high up near the roof: the whole of Grendel’s shoulder and arm”

Another celebration followed, but of course, something had to be done about it. The death of Grendel was avenged by his mother.

“Now his mother/had sallied forth on a savage journey/grief-racked and ravenous, desperate for revenge”

Her trophies were the death of Hrothgar’s most trusted retainer, and her son’s arm. Beowulf goes to her home beneath the lake and engages her in a fight to the death. Beowulf takes another trophy back to Heorot: Grendel’s head.

The similarities between the motivating powers of death change when we examine the life of Anakin Skywalker. It was the death of Anakin’s mother that caused him great pain that had to be avenged. He trained for ten years within the Jedi Order. Halfway through the film, Star Wars, Episode II: Attack of the Clones (paid link), he dreams of his mother being harmed. He returns to his home planet against everyone’s wishes and receives information from her husband that she has been kidnapped by Tusken Raiders. He goes to find the tribe that kidnapped her and ends up slaughtering the entire tribe for kidnapping and enslaving his mother.

Anakin explains to Padme Amidala that

This act of genocide showed what he was capable of, and foreshadows what we know is coming in the future for him. This also deviates from Grendel’s legend, as we see the aftermath of Anakin’s wrath. Grendel’s wrath is born by his blood, while Anakin’s wrath is in direct response to outside circumstances.

Furthermore, Anakin’s death is not committed by Tusken Raiders. He left no survivors. His death comes much later. It is committed by someone he had come to value as his father, his Jedi Master Obi-wan Kenobi in Star Wars, Episode III: The Revenge of the Sith (paid link). This is another point where the similarities between the source of evil within Anakin and Grendel deviate. Anakin is left to die on the volcanic planet Mustafar with no left arm and no legs.

The final capping blow is that he is burned to death for trying to win in his battle against Obi-wan. Anakin is resuscitated and given the infamous black suit and cybernetic limbs that he is known for in the second part of the series. No one dares question Anakin’s death. They knew what he was capable of, what he had committed in the film thus far, and that his death would be mourned as a great loss to the Jedi, but nothing more.

Furthermore, what makes these two as special as they are to be the villains in their respective works? Were there other Grendels in farther flung parts of the world? I concede that we do have Grendel’s Mother to contend with in the poem, and she is a major villain. Earth as we know it now is greater than it was in Biblical times. If Cain’s story took place in the area known to the people of the Bible, how did Grendel and his mother end up in Hrothgar’s kingdom to begin with?

Perhaps Cain’s descendants were bested by Beowulf-like characters in their world but are forgotten to time, or ignored as being inadmissible to the canon. I wonder why the stories of Cain’s other descendants were not committed to memory or paper if they ever existed. Expanding on this further, the galaxy is so expansive and the Force so powerful that it seems almost abnormal to me that only Anakin Skywalker was born by sheer will of the Force. This also brings up the issue that evil has no boundaries. It can be found anywhere. It is inescapable and must be fought.

In sum, I believe that evil is not a choice. Villains are born evil. As shown throughout this essay, Grendel was born with a Biblical curse flowing through his veins. This gives him an inescapable purpose to kill. Anakin Skywalker was born in such poor conditions under questionable circumstances that it is no wonder he became the most supreme commander of evil.

Evil is manipulated, evil is inherent, and being evil is unavoidable. Can the nature of evil be rehabilitated or controlled within an individual? Perhaps, but that was not the scope of my essay. Evil is evil. It cannot be contained, only defeated. We can only hope that there are heroes to our villains in our fictional works, such as Beowulf or Luke Skywalker, to save us from such evil.