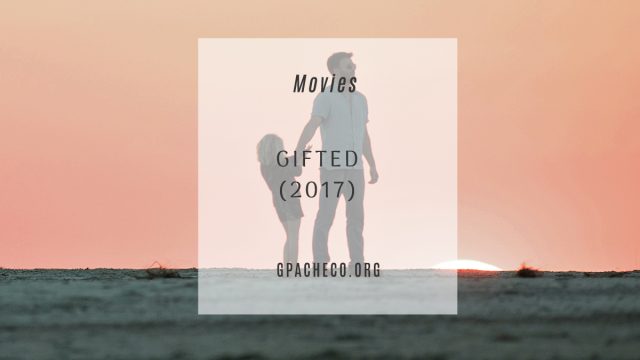 Gifted is a beautiful, heart-wrenching picture. Chris Evans headlines as Frank Adler, uncle to the precocious and uber-talented McKenna Grace’s Mary, the gifted of the title. Jenny Slate, Lindsay Duncan, and Octavia Spencer round out the intimate cast.

I loved Evans and Grace’s chemistry. My favorite line of his is something along the lines of, “I had no business being her father, and I told myself every day that I would call Child Services, but then she’d do something that made me stop and say, ‘I’ll do it tomorrow.'”

I was on board with the story, but my heart broke at this moment. I’m not a parent. I’m the best damn auntie ever if I do say so myself. Ask any of my babies. I’ll be damned if I was left in charge of my niece or nephew by one of my siblings or my friends who are sisters to me anyways, and some outside power tried to take them away from me or put that shadow of a doubt in my head that us being apart would be better for all of us.

It doesn’t matter how you came together; you make it work, which Frank did in his way. I bought that. I honestly thought it was going to be a cheese-fest, but the story dug into my soul.

Grace held this picture. Like, I was in awe of how well she carried her lines. Anyone else would’ve garbled on them, but Grace pulled them off. But, of course, she had the best ones too. When I said precocious, I wasn’t joking. Mary crunches numbers like a computer, swings curses like a slingshot and fights for the underdog without much deliberation.

Yet, underneath the bravado and misunderstood (or completely understood) genius, there is still a fragile little girl. I can’t wait to see where her career goes. I’m a fan. Her scenes with Octavia Spencer’s Roberta were a highlight for me, and they provided some much-needed relief from the dramatic scenes that make up much of the film.

As her uncle, Evans pulls off the worn, damaged single father vibe very well. His scenes with Lindsay Duncan were exquisite. I enjoy every one of her performances. I’m glad they didn’t oversaturate his relationship with Mary’s teacher Bonnie either, played by Jenny Slate. It could’ve been much worse because, in anyone else’s hands (acting or script-wise), Bonnie would’ve been the savior who would light a fire under him to make the right decisions, and blah blah blah.

Frank comes to his conclusions on what is right and what he should do. But, then, you can see how he lives with the consequences of all of them. I enjoyed that. He pulls back when Mary needs to shine and fills up the screen with his understated performance when needed. I’ve been following this kid since Not Another Teen Movie. There isn’t anything I’ve seen him in that hasn’t knocked my socks off. Gifted joins that list.

Gifted is a feel-good movie without being over the top cornball. It’s funny when it needs to be and dramatic in all the right places. The dialogue is the right amount of sass. If they toned down the mouth, I guarantee you that I would’ve walked out of the theater complaining about it in this review. Instead, the dialogue humanized them, which is hard to forget to do when you’re writing something that you want to pluck at a movie-going public’s heartstrings.

Tom Flynn wrote the screenplay, and it’s his second feature-length screenplay. He did a fantastic job with this one. People always overextend the credit to the directors (Marc Webb also did 500 Days of Summer), but if they didn’t have a script, if they didn’t have a writer to put words in the actors’ mouths, there would be no movie.

And that’s my plug for my fellow writers out there: tell a damn good story. Then, everything else will fall into place.

There is only one success: to be able to spend your life in your own way. Christopher Morley