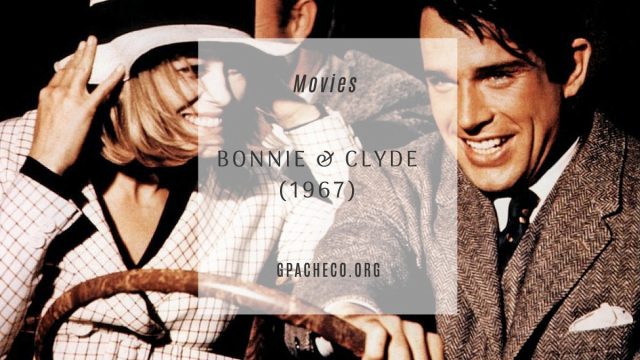 They’re young… they’re in love… and they kill people.

Bonnie and Clyde is a solid, character-driven film that holds up well after 50 years. They easily could’ve made a picture focusing solely on the action, but it was led by these larger-than-life characters. I felt Beatty and Dunaway had great chemistry.

There were a lot of women from that era (Shirley MacLaine, Jane Fonda, Tuesday Weld, Ann-Margret, Leslie Caron, Carol Lynley, Sue Lyon, Cher, Natalie Wood) who probably would’ve interpreted Bonnie much differently from Dunaway. Beatty was a good choice and the reason why MacLaine missed out. Their supporting cast was perfect: built like a tank Gene Hackman, diminutive Michael J. Pollard, silly Gene Wilder (in his first movie), and shrill Estelle Parsons (who won the Best Supporting Actress Oscar for her role in the film).

I’m glad there was a balanced character study of Bonnie and Clyde. They could’ve slanted the movie one way or the other. But they showed each of their motivations through their dialogue together, as well as their attraction to the other equally. In fact, I feel like if this was handled by another director, they would’ve messed it up.

A concern I had before the screening was how they were going to handle the actual timeline. Their crime spree was about 2 years – give or take. Director Arthur Penn subtly plugged in references to years and locations throughout the film if you’re watching carefully. I mean, not when they’re talking about clearing the border to go to Oklahoma in the dialogue. You’ll be able to pick up on where you’re at even without the prior study of their story.

I’m also partial to the fact that Bonnie was a poet. Here’s the poem that Dunaway read in the film that was written by the real-life, Bonnie:

The Story of Bonnie and Clyde

You’ve read the story of Jesse James
Of how he lived and died;
If you’re still in need
Of something to read,
Here’s the story of Bonnie and Clyde.

Now Bonnie and Clyde are the Barrow gang,
I’m sure you all have read
How they rob and steal
And those who squeal
Are usually found dying or dead.

There’s lots of untruths to these write-ups;
They’re not so ruthless as that;
Their nature is raw;
They hate all the law
The stool pigeons, spotters, and rats.

They call them cold-blooded killers;
They say they are heartless and mean;
But I say this with pride,
That I once knew Clyde
When he was honest and upright and clean.

But the laws fooled around,
Kept taking him down
And locking him up in a cell,
Till he said to me,
“I’ll never be free,
So I’ll meet a few of them in hell.”

The road was so dimly lighted;
There were no highway signs to guide;
But they made up their minds
If all roads were blind,
They wouldn’t give up till they died.

The road gets dimmer and dimmer;
Sometimes you can hardly see;
But it’s fight, man to man,
And do all you can,
For they know they can never be free.

If a policeman is killed in Dallas,
And they have no clue or guide;
If they can’t find a fiend,
They just wipe their slate clean
And hand it on Bonnie and Clyde.

There’s two crimes committed in America
Not accredited to the Barrow mob;
They had no hand
In the kidnap demand,
Nor the Kansas City depot job.

A newsboy once said to his buddy;
“I wish old Clyde would get jumped;
In these awful hard times
We’d make a few dimes
If five or six cops would get bumped.”

The police haven’t got the report yet,
But Clyde called me up today;
He said, “Don’t start any fights
We aren’t working nights
We’re joining the NRA.”

From Irving to West Dallas viaduct
Is known as the Great Divide,
Where the women are kin,
And the men are men,
And they won’t “stool” on Bonnie and Clyde.

If they try to act like citizens
And rent them a nice little flat,
About the third night
They’re invited to fight
By a sub-gun’s rat-tat-tat.

They don’t think they’re too tough or desperate,
They know that the law always wins;
They’ve been shot at before,
But they do not ignore
That death is the wages of sin.

Some day they’ll go down together;
And they’ll bury them side by side;
To few it’ll be grief
To the law a relief
But it’s death for Bonnie and Clyde.

I was kind of annoyed by the jump cuts but IMDb says the film was influenced by French New Wave, so this gets a pass. I think smoother cuts would’ve been better though. I did enjoy the unusual balancing of the energy of “Keystone Kops-style slapstick films” that descended into “horrific and graphic violence.” For a film made in 1967, glorifying people on the losing side, this was a fresh take. It still works today. Bonnie and Clyde as a pair have transcended when they’re known for, and it seems silly looking back on them the way that we do, but they were real people.

They’re a bonded pair, which is part of their enduring mystique as the ideal “ride or die” couple in Americana. You can’t think of Clyde without Bonnie, or Bonnie without Clyde in the same breath. It also helped that they became famous during the Great Depression. Americans were searching for something, and not finding it. Then, here comes this photogenic, infamous couple, boosting cars, and robbing banks owned by the Man. They were doing what they needed to do to get by, since getting by wasn’t getting people anywhere.

Did you just rap that at me Anonymous