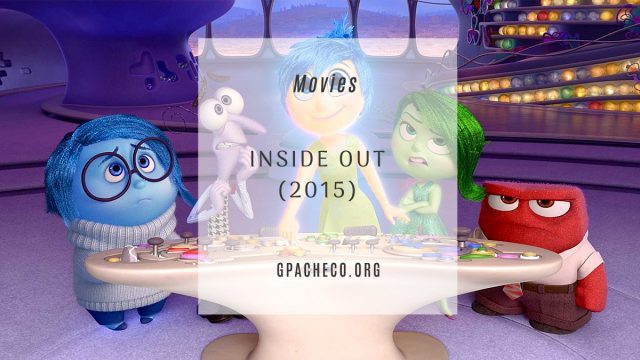 As part of the Fathom Events special event premiere, Pete Docter (who also directed Monsters, Inc. and Up) and the producer Jonas Rivera brought us along on a tour of the Pixar Animation Studios in Emeryville. My favorite parts were seeing Peter Sohn (he did the voice for Emile in Ratatouille and was the inspiration for Russell in Up) and the crew viewing the dailies for The Good Dinosaur, and John Lasseter who was producing Toy Story 4. I’m a little iffy on 4, to be honest. I’m quite happy with the Toy Story shorts they’ve had; dropping in to see how Woody and the gang are with Bonnie. I don’t know where else they can take the story, but I trust Mr. Lasseter. I even like Cars.

So onto the movie.

As with lots of recent Disney releases, they screened Lava beforehand. It was adorable. James Ford Murphy – the director – were dropped in by Pete and Jonas for the tour, and he explained that the short was based on his love of Hawai’i. You could definitely tell he had a lot of love for it. Some might say he was in “lava” with it. That’ll make sense when you see it.

The thrust of this “fish out of water” story is Riley Anderson, a young 11-year-old hockey-playing girl who moves from Minnesota to San Francisco because of her father’s new job at a local startup called Brang. I, for one, sympathized with that journey so much. I did have a leg up on the emotional impact of moving having taken trips regularly over the years, but sometimes you can hype something up so much, and then you’re let down. Her first view of the house was how I feel when I drive around the city! And I go to school there, so that tells you how often I feel that hype.

The stars of the film are the emotions in Riley’s head: Joy (Amy Poehler), Sadness (Phyllis Smith), Fear (Bill Hader), Disgust (Mindy Kaling), and Anger (Lewis Black). They are in charge of maintaining the thoughts and memories which are stored in orbs over the course of her life in Headquarters, whose furnishings are very atomic chic. It was sort of like something out of Monsanto’s House of the Future at Tomorrowland in Disneyland.

I almost wish my emotions could be voiced by this cast in real life because they nailed it. What I like about the emotions is that they’re going on this journey with Riley. So the things that they’re experiencing in her head as they’re happening are all new to them. This was embodied at the very end when a certain button appears and Anger goes, “what’s this?” I paraphrased that. I’ll leave you to keep an eye out for that gag though.

They showed some trivia slides before the movie, and Pete put Riley’s hockey rink where the Walt Disney Family Museum is in real life. I thought that was cool. I love the museum.

What I enjoyed most was that they grounded the film in a lot of reality. There are islands in Riley’s head that systematically break down over the course of the film: Goofball Island, Family Island, Hockey Island, etc. I knew immediately what was happening. When you break something down, you have to build it back up again in a different way. That’s the closest thing to a spoiler you’re going to get out of me! The islands are based on Disneyland’s lands because Pete’s a Disney dork. I love that his passion allows him to make movies like that.

My favorite non-main character is Riley’s imaginary friend Bing Bong. His story arc was so emotional for me. I personally did not have an imaginary friend growing up, unless you count the girls from the Baby-Sitters’ Club. “Take her to the moon for me” will live on in my heart as one of the greatest final lines ever.

Overall, the movie was paced just right, and the peaks and valleys of the storyline were delivered perfectly. I haven’t read other reviews, so I hope the critics aren’t going to be mean. I enjoyed the movie immensely. It had the same piss and vinegar of every other Pixar hit without feeling like it was an echo of them. It will fit perfectly in the pantheon of Pixar. Of course, I’m completely biased but there hasn’t been one Pixar film that hasn’t hit all the right notes for me. Again, I really enjoyed Cars, but admittedly, not a huge fan of Cars 2. I can’t wait for it to hit Disney Movies Anywhere. Stay for the end credits. It’s hilarious and shows how these five emotions affect us individually.

After some technical difficulties, the theater got to view a tape-delayed interview with Amy and Pete. I thought they would ask more questions from Twitter but they didn’t have that much time. The one thing that was in my head during the run-up to the movie was how they decided on the 5 emotions, and luckily someone from Twitter asked. Pete and the crew did their homework. They met with doctors who had ideas for 200 emotions, 18 emotions, etc. They met a doctor who suggested that we have 6 emotions. The sixth one was Surprise but Pete and the crew decided to combine that with Fear.

But my favorite part of the interview was when Pete and Amy were discussing the writing process. Amy and Bill had a lot of input into the script during the production process, which was wonderful. I just finished my semester of Humor in Writing, so everything they were saying about the writing process spoke to me deeply. I found myself nodding my head, like “yes! I understand where you’re coming from!”

I just knew there were stories I wanted to tell. Octavia E. Butler