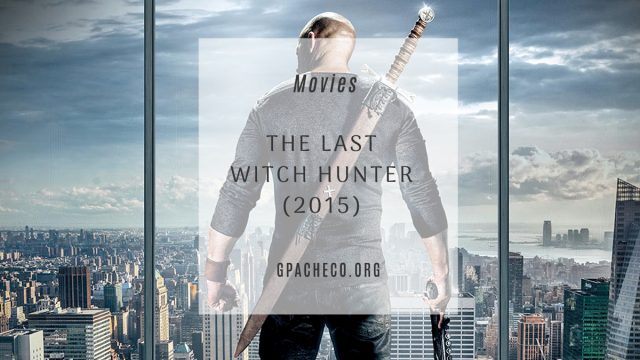 On the surface, The Last Witch Hunter feels like Vin Diesel playing Vin Diesel in a Vin Diesel film, produced by Vin Diesel. And you may very well come away with that perspective, once you’re through. But if my writing program have taught me anything, it’s that the story takes precedence and it’s your job to tell the story to the best of your ability.

The premise of the story is something I hadn’t seen before. The Last Witch Hunter is based on Vin’s Dungeons & Dragons character that he has played nearly all his life. I wonder what stats he earned doing this movie.

The story begins over 800 years ago. Led by an elder named Dolan, Vin’s character Kaulder and the remaining men in his village (a generic Viking community that is never named) are charged with hunting down the Witch Queen. She’s only known by her title; she’s never given a name but is given all of the formality of the title by her kinsmen. In my writing program, someone would say, “why doesn’t she have a name? Boo!”

I think it was fascinating to know her only by her name. When you name something – like Rumplestiltskin – shit’s about to go down. I think it was a craft choice to know her only by her title. She is incredibly powerful and completely threatened by the presence of humanity. She has brought a plague down on them and laid waste to Kaulder’s wife Helena and their daughter Elizabeth. Obviously, when deciding to join the hunting party, Kaulder has nothing to lose. Kaulder kills her but she curses him with immortality.

There’s a voiceover by Michael Caine which sums up where we are in the story when we are brought to the present day. Dolan has become a hereditary title and they have been charged with keeping Kaulder on the straight and narrow through their secret society, the Axe and the Cross, with its heavy Christian imagery. Michael Caine’s character is the 36th Dolan. Kaulder has been entrusted with a mission to help keep the human world separate from the witch world, due to a pact that was forged sometime after Kaulder became immortal.

So in terms of story, it wasn’t anything new. Isn’t it always some savior character who has to save humanity from itself, or a dark power that has been sleeping for ages? I was kind of hoping they would twist the conventions of witches in pop culture as we know them a little bit. However, the filmmakers don’t paint witchcraft as black and white.

There is an uneasy peace between Kaulder and the witches. He wears a bracelet with the symbol of the Axe and Cross, and they all know who he is even if they have never met each other before. He only punishes those who flaunt their presence because that would break the truce between humanity and the witches.

The introduction of Rose Leslie’s Chloe is nothing new. She is a witch who owns a bar and Kaulder goes to her for assistance. She doesn’t willingly give it but joins his mission when she has no other place to go. Chloe is a dream walker, which is considered a power for dark witches only. However, throughout the film, Chloe proves that she isn’t a dark witch, even though she was born with those powers. Witchcraft is shown as evil but how the witch practices it, depends on each individual.

Looking back, every ounce of me believed Chloe was going to assert her allegiance to witchcraft and bow before the Witch Queen. The person who does end up betraying Kaulder because you can’t have a fantasy popcorn flick without betrayal against the hero was kind of like, “duh, I should’ve seen that coming.” I spent the whole time so focused on Chloe that I didn’t think the betrayer would do that. That was my fault. I turned my critical eye to the wrong person.

The action was excellent. The jump scares were needed for a bit of levity, in terms of the heaviness of the mythology that they throw at you. You really have to hold onto the mythology as you go. We’ve discussed that in writing workshops. As a writer, the mythology of your story is yours to do with as you see fit, but as long as you establish it early and stick to it, no one will be able to fault you. Now, how clearly fleshed out that mythology is and if it works is in the hands of the reader is a different beast.

Another thing that came up in my head as I was watching was “Why now?” Why are we following Kaulder at this point in time after 800 years of him doing this thing that he does? Why didn’t we meet him earlier in his journey? I don’t know if I bought the film’s reasons why by the end of the story, although within the mythology it makes perfect sense.

I’m also unsure if I bought the chemistry between Kaulder and Chloe. You’ve spent 800 years policing witches and this one is the one that cracked your veneer? Maybe that’s because I don’t see Vin as a sexual being. All the action movies I’ve seen him in making him out to be sexy without the act of having sex if that makes sense. Seeing him with a woman onscreen is somehow off-putting to me. Which is funny because I grew up in the era of action films where the hero always wins the woman.

I hear there is a sequel brewing, but like all things in life, subject to change.

You know what's funny about death? I mean other than absolutely nothing at all? You'd think we could remember finding out we weren't immortal. Sometimes I see children sobbing at airports and I think, 'Aww. They've just been told.' Carrie Fisher