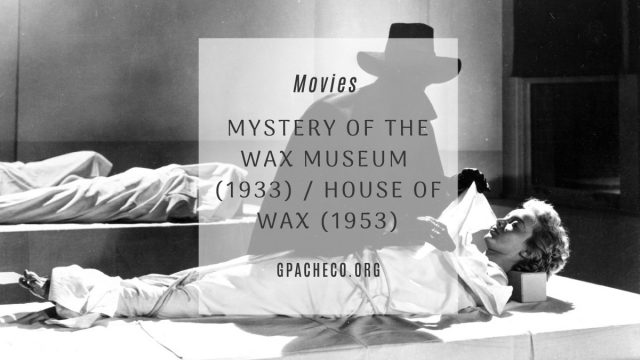 I decided to do a double feature of the original Mystery of the Wax Museum and its 50s remake, House of Wax.

The mystery is a fun 30s romp, on the surface. It was a suspenseful thriller, and it hooks you from the first punch to Igor’s face. I liked the pacing. It didn’t fill the time with useless backstory or filler montage scenes as we expect in modern films. It was nonstop action. I think that’s what I appreciate about movies back in the day. They didn’t waste anyone’s time with nonsense. Michael Curtiz was a masterful director, later directing Casablanca and Mildred Pierce, among many others.

Igor’s backstory reminded me of the Pygmalion myth, where the creator falls in love with his creation. You could say Mystery takes the Pygmalion myth further when he takes a human being devoid of humanity and turns them into creatures (the judge into Voltaire, Joan Gale into St. Joan of Arc). I love exploring the idea that society is controlled and harnessed to live forever in art.

What is unique about the film is the power the women hold. The villains from Mystery fall into the same gender slots: we figure out the disfigured Igor’s motivation, and wax is the only thing preserving the appearance of humanity. Professor Darcy is a junkie and follows Igor’s directives because he is guaranteed his next fix. Drugs are bad, m’kay?

Hugo is a deaf-mute and must follow his master’s orders or try and find someone else to accept his imperfections. I love that dynamic. He’s guaranteed room and board, so long as he keeps Igor’s dreadful secret. No one would question Hugo, and no one would go so far as to harbor a deaf-mute back in those days. The autonomy of the villains is fascinating and probably not thought of much.

The affections of Joe Worth – the millionaire playboy suspected of murdering Joan Gale – change as soon as he meets Florence. This plot point brings me to my following observation. I felt the way that Florence’s love life played out was poor. She establishes her goals in life quite early in the film that she’s all about being a legit reporter and having fun, and if Florence is going to marry, she’s going to marry for money. So she interviews Worth in jail and dazzles him. But, unfortunately, she’s a sassy broad, and he wants to strap on the old ball and chain and marry her within 24 hours of their initial meeting.

Of course, my feminist lens became further blurred with annoyance when her editor-in-chief’s final directive was “act like a lady and marry me.” Rude. He spent the whole film maligning her work, going as far as to fire her for lack of good stories. He spends the entire movie telling her she wasn’t good enough. The moment she shows her mettle, then he goes, “oh, a worthy opponent. She should be my wife!” She shoves Worth aside in favor of the editor. I much prefer Worth for her because he was a guy guaranteed to take care of and love her without any pretension.

It’s technically a Pre-Code film, so I’m a little off-put by the happily ever after we Americans are so famous for now. I only like HEAs if they make sense. She should’ve married for money, that’s all I’m saying. At least she could continue being a reporter. Then, she wouldn’t have to worry about financing her lifestyle. Yes, I know I am looking at this with a modern lens, but I want to believe.

It’s technically a lost film, and the distributed print is a poor man’s copy of the original Technicolor. However, the Technicolor saturation was awful, as noted by other reviews and Wikipedia. So, of course, that’s the copy I have since I have the bundled version of Mystery and House. It’s okay. Some of the colors are a bit jarring but don’t detract all that much. It only becomes an annoyance when you know to look for it.

House of Wax follows the original plot of Mystery with some slight changes. I don’t wish to dwell too much on that aspect. I preferred Mystery over House, to be honest.

I caught the opening title cards where it announced it was mastered for 3-D. When it was first released, it was the first successful 3-D picture. Fascinating. You can always tell when a movie slathers on the 3-D. I was like, “why is this annoying guy with the paddle ball breaking the third wall right now?”

Then my brain looped my thoughts together: viewers were supposed to see his character in 3-D. How exciting it must’ve been to see that in a theater. I personally and professionally hate 3-D. You might as well give the people Smellovision. But this movie came out in 1953. The novelty must’ve made for a fun theater-going experience.

I loved Vincent Price’s performance as Professor Jarrod. I think he carries the picture. The evolution of his character was fun to see play out too. He embraces the horror that he has to live with every day. I’m glad Mr. Wallace called him out on it. I would think something was amiss if an artist changed his point of view so rapidly like that. I kept looking at Igor and tried to place him every time he came onscreen. I finally had to look it up. Charles Bronson played him!! You can’t miss that chin.

I think the cops in this film were more believable than Mystery, however. I will give it that. They did detective work rather than having a newspaper lady character kick rocks. I was thoroughly annoyed by the vapid Cathy character. I did feel bad that she had to die in that manner to become Joan of Arc, though.

From the feminist side, you can see who owns this version of the story. That’s right, THE MEN. Pfft. They dominate this story. I didn’t feel anything for Sue, even though she was a massive part of the story moving forward. She had an even lesser status than Florence. At least Florence was brassy enough to keep making noise. The filmmakers diminished Sue to where her fears were merely troublesome for the men in charge because she was a lady.

The difference between Sue and Florence is that Florence didn’t let her gender stop her. She kept busting balls. For Florence, she had something to prove to everyone. Sue cried from the grief of losing Cathy the whole time, and the men only kicked rocks to shut her up. A part of me hoped House would genuinely become a horror picture and refuse the happily ever after for Sue. I had no sympathy for her and hoped she would die. So you can see how the Production Code had a significant influence on movies. Remember that only 20 years elapsed between Mystery and House.

Maybe that’s why they remade it: to remind women of their place in a horror picture.

And I have this little litany of things they can do. And the first one, of course, is to write - every day, no excuses. It's so easy to make excuses. Even professional writers have days when they'd rather clean the toilet than do the writing. Octavia E. Butler