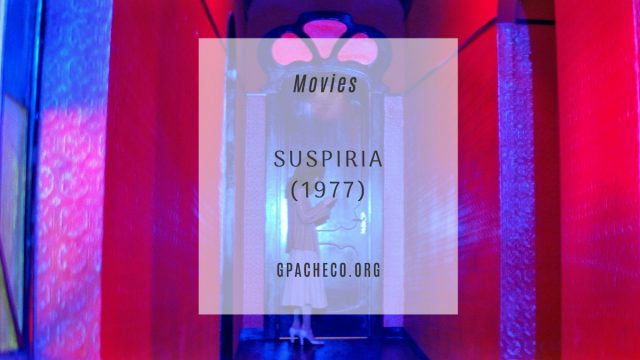 Suspiria crashed into my heart like a trainwreck, and I refused to look away. It combines my biggest fears: dogs that attack their owners (I love dogs so much, how could they ever hate me enough to take my life?), maggots (I’m a clean freak, and if I saw a larva, I would lose my shit), barbed wire (I grew up in the country, ain’t nobody got time for that), and ballerinas (enough said).

I was familiar with the performers of the soundtrack Goblin because of their involvement with Romero’s Dawn of the Dead (paid link). The original Dawn is one of my favorite films of all time, regardless of genre. My heart dropped into my stomach whenever the music kicked in. Music kicks me in the teeth no matter what the situation, but to have a film so intricately intertwined with its music is rare.

There’s always decent noise during movies. But when you have a director that had heavy involvement with the scoring of a picture, it makes the entire experience a lot of fun. Sometimes, a soundtrack will make you go, “what?” It will pull you out of the scene, ruining the experience. Goblin’s soundtrack adds to the horror. So disjointed and melodically un-melodic, if that makes sense.

I think the great horror storylines are the ones that use real people, in real situations, who find themselves mixed up in the supernatural accidentally. Now you can put forward the argument that “hey stupid, that’s the basis of all horror films.” But I don’t think that’s the case.

Rosemary’s Baby does that: the horror comes from the fact that it’s so grounded in reality.

2006’s The Covenant is entirely supernatural – and while filled with beautiful people – it simply doesn’t play off well.

Suzy – the final girl – holds the accidentally supernatural card in spades. She’s an American dancer who decides to further her dance studies in Germany. We realize quickly that this fish out of water has fallen headlong into a bottomless pit of the supernatural.

She begins to experience and witness strange happenings personally. Despite seeing a former student kicked out and hearing of her murder within 24 hours of her arrival, Suzy doesn’t turn tail and run. I probably would. She continues. Of course, if she did end up going home, we wouldn’t have a film to watch!

The key to her survival is knowledge, so even though bad things are happening, she keeps pressing forward. The film doesn’t explain why; it moves forward naturally. We don’t get into Suzy’s head at all. I didn’t feel anything for her. Why do you want to stay in a place you know is wrong? She has nothing to gain other than destroying the coven, but they didn’t decide that until the last five minutes. It was them, or her.

The gore was delicious. The first death was shot through with German Expressionism, with the color turned up to 11. I did some research, and it was one of the last films done in Technicolor. Fascinating! The jagged pieces of glass, bold lines, the color scheme, the blood. I had an overwhelming need to see it unfold. It was beautiful.

In another nod to the unsettling, the mural in the head’s office was a lovely homage to MC Escher and reminded me of German Expressionism as well. Den of Geek has a screenshot of it if you want to see what I’m talking about.

As stated earlier, the dog turning on its master got under my skin. The soundtrack during this scene was so unsettling. Goblin did a phenomenal job. I had to hold my dog extra tight as the scene played out because if he did that to me – as much as his tiny Shih Tzu frame possibly could – it’d be a well-deserved death. I’ll try not to discuss the maggots or barbed wire scenes much because you should see it yourself! I would keep an eye out.

Suspiria is my first foray into Italian Giallo horror. So I know I can’t take the premium of the lot and expect the others in the genre to be the same. But I enjoyed the experience and can’t wait to consume more.