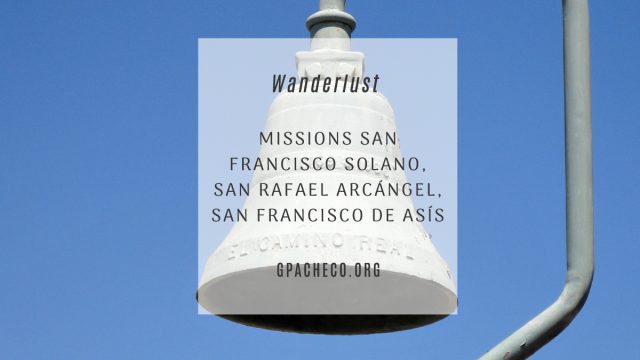 My BFF A and I made a pact to eventually visit all the California missions. From a historical standpoint, they’ve been amazing, educational, and humbling. From a Catholic standpoint, I’m torn. I am hyper-conscious of what the Spaniards did to the indigenous people of California. The Spaniards did it to the Philippines too. That’s why my surname is Portuguese. And why the PI maintains a heavy Catholic influence. But I think as long as I am consciously aware of these facts, those thoughts and emotions will never die with me.

This is a recap of some of the missions off that list.

I asked A to come up early in anticipation of traffic and the short hours of operation for each mission. A drove up from Modesto hella early, even earlier than expected because traffic was so good. We hit the road, barely grazing traffic on the way up. It was the longest drive ever and neither of us had ever been to Sonoma before.

San Francisco Solano was lovely. The $3 admission included entrance into General Vallejo’s Home, Sonoma Barracks and Petaluma Adobe State Historic Park. We didn’t go since our primary objective was to visit the missions.

So we decided we would come back only for Sonoma someday soon, go antiquing and visit the Sonoma Traintown Railroad. I love trains! Solano’s gift shop and physical location are small compared to the others we’ve visited thus far (Carmel and San Jose), but their shop had this awesome map of the missions that we hadn’t found at the others. We both got copies.

On the way to Solano, I realized that we were rollin’ deep in Marin County, home of Skywalker Ranch. Lucas Valley Road (not named for George, funnily enough) caught my eye. I told A, “Skywalker Ranch is near here!” A did a quick Google search and said: “they don’t do tours.” I was so excited that we were so close that I wanted to take a pic near a sign that said “Skywalker Ranch.” So I punched it into Waze – my preferred GPS app – and Lord almighty.

It takes us up this super remote, twisty as all hell road towards Skywalker Ranch. I straight up got dizzy from all the twists and turns! George Lucas truly wanted his privacy and boy, did he get it when choosing that location! Props to him. We took pics outside the gate. That was seriously good enough for me because the EXIF data shows I was there. Yeah, boi.

From Skywalker Ranch, we continued our drive back down south to San Rafael Arcángel. Parking is nonexistent. Ugh, what a mess! I had to park a block away but it turns out there was a garage right across the street. Nothing exists from the original San Rafael Arcángel except for their bells. Everything has been rebuilt. Their gift shop was massive, probably the entire size of Solano’s mission building.

It has an operating parish & school but they don’t open their chapel except for special occasions. It was the most gutted of the original missions and is located on the San Andreas Fault. It makes sense they’re not investing in historically restoring something that will bite the dust when the next Big One hits.

From there we went back through the Robin Williams Tunnel to the Golden Gate Bridge gift shop. A had never been on the GGB before, and that day, she went twice. The parking was atrocious for the gift shop. It was like the parking lot near the “Welcome to Las Vegas” sign. People coming and going from all directions, endless tour buses, drivers trying to get the spot of any car that was leaving.

A couldn’t walk from the side parking lot that was nearby and said she would rather push on to Mission Dolores. I agreed since we were close to closing time. Parking was easy; I found a spot near a school two blocks down and snapped it up. The time limit was 2 hours but we were gone well before that.

Mission Dolores is breathtaking. The stained glass, the grottos, the artwork. I felt tiny walking through their basilica. It felt grand. Mission Dolores was the church that Pope John Paul II visited in 1987. They had the pew he used in the old mission’s building.

They keep the mission separate from the basilica because it’s a functioning church. My only concern was the painting of Padre Serra being embraced by an indigenous child on their altar. It rubbed me the wrong way.

After Mission Dolores, we decided to try the GGB gift shop again. I dropped A off at the curb and went into the parking lot down the street to the left. Since we got there past 5, I didn’t have to pay for parking. The view of the bridge there is my favorite and the same location I went with my niece C when she came to visit with her boyfriend. I was able to buy souvenirs since I couldn’t when C was here.

One of the photos on display in the gift shop was the Palace of Fine Arts. A was like, “I haven’t been there in years. Can we go?” I’m the driver, we go where I say we go, so I said, “it’s not that far, let’s go!”

The distance between the GGB and the Palace of Fine Arts is nothing. In fact, I even found a parking spot as soon as I turned the corner! Blew my mind. We walked the grounds. The last time I went was at least 6-7 years ago when they were refurbishing everything. It was amazing to finally walk under it and soak it all in.

I thought the female statues were looking into the statues, but A pointed out that they were crying. I changed my perspective and it turns out they were covering their faces! They’re weeping angels! Don’t blink!! Wikipedia confirms they’re weeping women.

They are called the Weeping Maidens, and they are crying into large planter boxes. Their tears were supposed to water the flowers and trees that were to be planted up there, but logistical problems and the cheap construction at the time would not allow this to be done. The Maidens are weeping because all the art that was to be housed here would soon be leaving. So there it is the logic of the Weeping Maidens, long may they weep!

All in all, a very much needed fun day.

He who has a why to live can bear almost any how. Friedrich Nietzsche