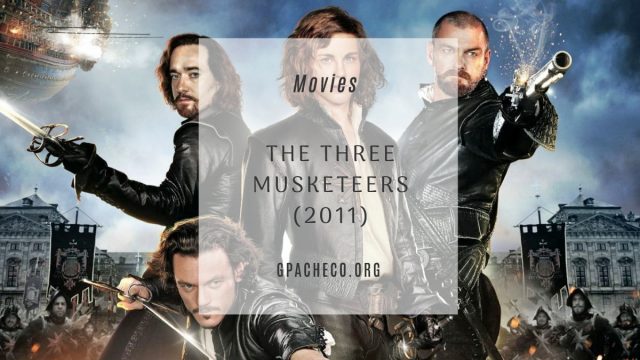 I didn’t have high expectations for this movie, even with an all-star cast of Christoph Waltz, Matthew Mcfadyen, Ray Stevenson, Luke Evans, Milla Jovovich, Mads Mikkelsen, Logan Lerman, Orlando Bloom (in supreme supervillain mode, excited to 11), or a cameo by Til Schweiger.

It was a fun romp nonetheless. It didn’t add any mystique to the Musketeer pantheon, but I don’t believe it took away any prestige. Unfortunately, that’s all we can ask of our adaptations nowadays.

Compared to other Musketeer adaptations, this film wholly embraces the swashbuckling romance we come to expect from a Musketeer movie. But the action was very post-Crouching Tiger, East meets West, like The Musketeer with Justin Chambers.

The filmmakers used Xiong Xinxin, Jet Li’s stuntmen, as their choreographer in that film. I know this sounds like I see this as a detriment, but I don’t. If anything, it lends credence to the source material. We must fall back to the excellent literature for the stories, even with advancing the technologically improbable in period movies where ordinary people can run up walls and do it in slow motion.

My only genuine complaint is with the dialogue, which was cliched. When Athos (Matthew Mcfadyen) says, “anyone who tells you otherwise is either a fool or trying to sell you something,” my cheese antennae went off the charts. I felt it oversimplified the rage he truly felt.

It fit in the context of the film, but I almost felt it was a disservice to the source to make the language modern. It rubbed me the wrong way. On the other hand, with the action being so modernized, I suppose the language had to follow suit. I am torn and have no outlet to reconcile my feelings!

Another thing about the story is how quickly we fall back to Leonardo Da Vinci as the go-to MacGuffin in adventure movies. Surely there must be another reason to propel a story without falling back to Da Vinci and the hope that his machines would bring. I honestly don’t care about him as a precognizant inventor anymore. Yawn.

The rivalry between Mads Mikkelsen’s Rochefort and Lerman’s D’Artagnan was hilarious to watch, although I didn’t feel there was much there. Furthermore, the complete Indiana Jones introduction of Rochefort? Very funny. Shoot first, ask questions later!

I like how they explained Logan’s American accent away by saying he was from Gascon. I don’t think there was much chemistry between Logan and Gabriella Wilde either. She played Constance Bonacieux, one of Queen Anne’s (the lovely Juno Temple) ladies-in-waiting. She was a little dull for me.

You know me, I want the females in the movies I watch for pushing the boundaries, even if movies are a man’s world and they cannot write well for a woman. Luckily, Milla Jovovich as Milady nailed it for me. She chewed up every scene she was in and spat it out with glee. Again, I believe her dialogue could’ve been better, but her husband wrote and directed this movie. She looked beautiful, as only a loving husband could frame his wife. And she was damned if she didn’t sell me on her overall awesomeness.

The movie ended on a cliffhanger, opening the door for a sequel. However, I have to agree with Milla; Summit dropped the ball promoting this movie. It could’ve been much more than the promotional campaign made it out to be at all.

I want to see the Duke of Buckingham (Orlando Bloom) and his fleet of ships and fancy new airships frolic about too. Not quite sure if they could use Twenty Years Later directly, or if they’ll stay within the first book to keep the story going or go entirely off the rails and have it be a truly historically accurate epic picture.

Also: Christoph Waltz for president! I wish he could’ve had more to do as Cardinal Richelieu. He’s so unique, and I’d buy an audiobook of him reading the phone book, no joke.

When I'm in writing mode for a novel, I get up at 4:00 am and work for five to six hours. In the afternoon, I run for 10km or swim for 1500m (or do both), then I read a bit and listen to some music. I go to bed at 9:00 pm. I keep to this routine every day without variation. The repetition itself becomes the important thing; it's a form of mesmerism. I mesmerize myself to reach a deeper state of mind. But to hold to such repetition for so long - six months to a year - requires a good amount of mental and physical strength. In that sense, writing a long novel is like survival training. Physical strength is as necessary as artistic sensitivity. Haruki Murakami