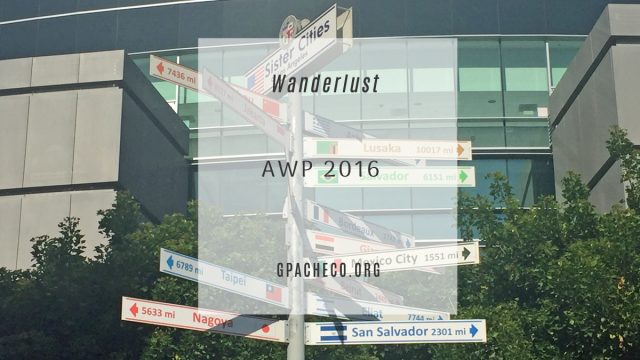 AWP is an annual conference for writers, teachers, students, editors, and publishers. AWP is an acronym for the Association of Writers & Writing Programs.

I went to my very first one while in my grad program.

It was a learning experience, to say the least.

It was an onslaught of information and positive vibes.

It was so inspiring, humbling, and cool to see people from all walks of life actually doin’ the damn thing and writing and publishing.

The panels I attended all advised pretty much said the same thing: write, write, write, read promiscuously, and send your stuff out.

Rejections are a part of life. These journals and agents and publishers have limited time, space and money.

So whatever you want to publish, make it count.

That’s the worst feeling, though: being rejected.

I wish I had a thicker skin in my younger days. I most likely would’ve published earlier and more often, if I hadn’t let the fear rule me.

But I didn’t have any mentors. No one I knew growing up was ideal for that, meaning I didn’t know anyone who was in the industry.

They were supportive but not the way I needed.

Now I have mentors, and I have resources.

I plan to exploit them, completely.

I also feel more comfortable with my voice that I’m ready to share it with the sick, sad world.

On Friday, I attended the following panels:

My senses were on complete overload this first day. Overloaded but energized.

The whole conference and the decision on panel attendance is almost an echo chamber, isn’t it, reflecting back to you what you already should know.

If not, maybe it opened some eyes, but not mine. I felt more resolute that this writing thang is what I’m meant to do.

On Saturday, these are the panels I chose:

I missed some of the Poetic Past panel but I think it was fascinating, what I heard. I hope there’s a historical figure out there whose story I can tell through poetry.

I think book reviewing might be a nice side gig, at least based on the panelists’ own career paths. They were all writers to some degree with reviewing on the side.

The Women Publishing Women panel got a bit heated during the Q&A section because a lot of the older women in the audience felt slighted that some of the panelists were skewing towards the younger crowd.

Overall, the Asian American panels didn’t bring me clarity. That’s not their fault.

But it was nice to know that the struggles I face as a writer of Filipino descent were all the same as the other panelists.

I’m aggravated that we don’t have a voice in mainstream literature. It infuriates me.

I guess my struggle is that I don’t want to be known as only an Asian-American writer. My siblings and I didn’t have the typical immigrant experience either.

My dad was born an American citizen because

I decided recently that hyphenating my identity because of that didn’t ring true for me. I’m Filipino adjacent. My dad served in the US Navy, so we’re as American as apple pie, as I like to say. We don’t speak the language (thanks Kuya!). I make a mean sinigang though. My pork adobo is pretty awesome too. So I don’t want to be pigeonholed. I don’t write to be seen as an Asian writer. My stuff is cinematic absurdism. It’s off-kilter, multiversal, on par with the Twilight Zone.

But I know my Asian-ness is what people see when they see my slanted eyes and unevenly tanned skin, or when they read my Portuguese surname.

I feel conflicted like maybe I should write to give voice that part of me because it is me. I don’t want to deny myself.

I want to be like Dionysus and enjoy the bacchanalia of my identity by gorging on the good, the bad and the ugly.

Being of Asian descent in America is an uphill battle.

I don’t know if I have the answers but the more voices that are in the conversation, the more the dialogue will educate the masses.

We shouldn’t have to hide in our bubbles anymore. It’s time for us to headline the show.

All in all, a great first experience that I haven’t forgotten.

Truthfully, attending the conference was only possible because I received a student discount AND I road tripped there.

If AWP was a bit more affordable, I would’ve gone again. But I have not.

I think it’s presumptuous to assume that working writers can go to these things without a little monetary assistance. We’re all poor!

The entrance fees to conferences and even writing contests feel like gatekeeping and a flagship conference like AWP should reflect that.

Life isn't about who you kiss, drunk at midnight. It's who you text nonsense to, sober from the toilet. Anonymous