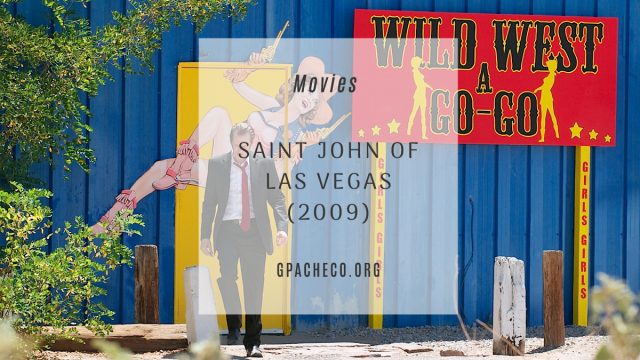 What compelled me to watch the movie at CineVegas was Imagining Dante in Vegas: “Saint John of Las Vegas” Director Hue Rhodes. Having read Dante’s Inferno in-depth for Medieval English Lit, I was excited to see a modern-day interpretation of it on film.

For an indie film, many familiar stars were in it: Steve Buscemi played the lead, John Alighieri. John is an ex-gambler and Las Vegas native who – down on his last bit of luck – makes a conscious decision to getaway. So he moves to Albuquerque, New Mexico, as far as his tank of gas would take him to start a new life.

But anyone who is from Vegas or has lived here knows that you can never get the city out of your system. If you think you’re leaving, you’ll find a way back by divine providence or because “the Devil made you do it.” My fair city seeps in like an aggressive form of inoperable cancer and will eat you alive in all the best ways possible. John’s hell is Las Vegas and all the dreams that she took from him. I should say “outside of Las Vegas,” as a few characters were quick to correct him.

Romany Malco played Virgil, a clear nod to Dante the Pilgrim’s host. But Saint John’s Virgil was nothing like his literary predecessor. His Virgil does lead John on his journey but in a more hands-off way. The Inferno’s Virgil practically had to drag Dante the Pilgrim through Hell and tell him to quit wasting his tears on the sinners.

Sarah Silverman played Jill, John’s love interest and co-worker. She was nothing like Beatrice, Dante the Pilgrim’s true love, the one who guided him to Virgil in the first place. But her character was a lovely addition. She has an obsession with happy faces (from her earrings, cubicle, bedroom, and down to her nails), like the happy face from Watchmen.

During the Q&A after the show, Rhodes said that we know people like this. People who have little quirks, where you might be shocked that they do this, but for them, it’s completely normal. I loved that explanation.

Peter Dinklage played Mr. Townsend, the owner of Townsend Insurance LLC. He is also Jill’s ex. I jumped in my seat when I saw him. His performance was terrific. I wish he has more screen time, but then, it wouldn’t make any sense. I love everything he is in, period.

The big-name sinners were played by Tim Blake Nelson (Militant Ned the Nudist), John Cho (Smitty the Firelord), and Emmanuelle Chriqui (Tasty D. Light the stripper who uses a wheelchair). I won’t give away the ending, but John does go through quite a journey to find himself. I’m not surprised in any way that he had to come back to Vegas to figure it out. Vegas has that power over everyone.

It is not the strongest of the species that survives, nor the most intelligent that survives. It is the one that is the most adaptable to change. Charles Darwin