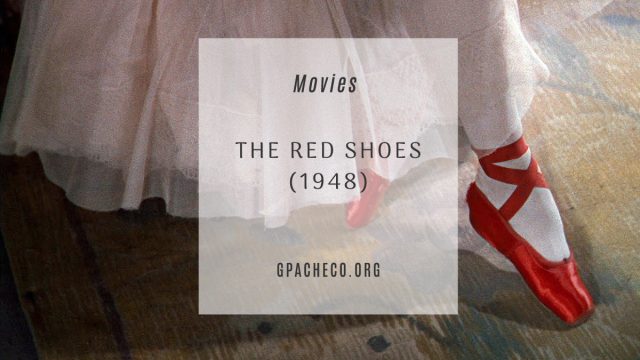 The movie won for Best Original Score and Best Art Direction and was nominated for Best Picture (Hamlet won), Best Original Screenplay (The Treasure of the Sierra Madre – paid link – won), and Best Film Editing (The Naked City won). I like knowing how a movie fits in the time it was released.

The plot is reminiscent of its source material and ends up reflecting real life. If you’re unaware of the Hans Christian Andersen fairy tale, a spoiled, selfish woman falls in love with an enchanted pair of shoes. Isn’t that how all great stories start? Anyways, they’re not so much delighted, as they end up cursed. So, she dances, and she dances until she dies. Read the original.

We meet Victoria Page – an unknown dancer from an aristocratic family. Nevertheless, she manages to secure a spot in the corps de ballet for Ballet Lermontov, where she catches the director’s eye, Boris Lermontov.

Based on her dance in Swan Lake, he decides to make her the star of his adaptation of The Red Shoes in Paris. Lermontov places these insane rules upon her, like making the composer Julian play the score for her during her meals. Her dancing is very rough around the edges, but this is a massive opportunity for an unknown like her.

As it is, their opening night is a great success. The film devotes a good portion of the movie to staging The Red Shoes. This part is my favorite sequence in the whole film. We spend so much time getting invested emotionally in the rehearsing of the play; one can only hope we can see bits and pieces. But, instead, we see the whole thing!

The medium of a film made it easy to consume the play too. When you see something in a theatrical production, you’re stuck seeing the story through the limitations of the proscenium arch—seeing The Red Shoes with the camera behaving as it was made the whole sequence ring more emotionally authentic. You’re focused on camera angles that you wouldn’t see if you saw it live.

As they were rehearsing for The Red Shoes, Vicky and Julian fall in love, discovered by Lermontov – who has also grown to love Vicky – fires Julian. Vicky follows him. Later, Lermontov tells her that he’s bringing The Red Shoes to London and wants her to dance the principal role again. So she’s between two worlds: dancing on stage where she belongs, working for an admittedly brilliant beast like Lermontov, or living as a housewife for Julian while he pursues his career and puts her own to the side.

She does choose dancing, but the power of the enchanted red shoes is too much for her. She tries to kill herself by leaping in front of the train Julian was going to leave on. She does somehow survive, the implication being she will never dance again or may die later. Lermontov goes ahead with staging The Red Shoes for the people who were waiting for Vicky, using a spotlight where she would’ve been dancing. Instead, she finds herself surrounded by a crowd of people that witnessed her almost suicide. She then asks Julian to remove the cursed red shoes, bringing the story back around again.

In regards to the Oscars it won, I’m inclined to agree. The score for The Red Shoes was luscious. It was pretty evident in the final ballet sequence. The story hit all the right notes for me. But the art direction? Whew. It blew me away—all in all, it was a fantastic film to enjoy.