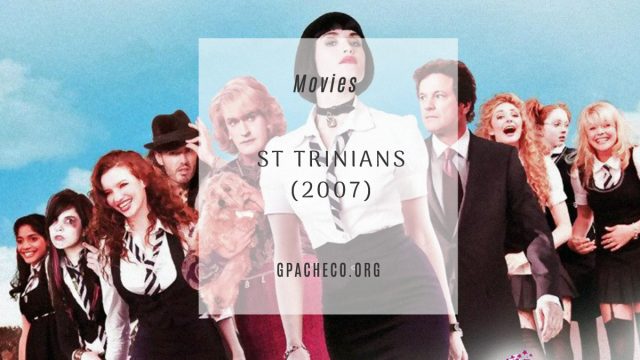 I was interested in this film because Girls Aloud did a couple of songs on their soundtrack (paid link): “Theme to St Trinians” and “On My Way to Satisfaction.” Both were such great songs, I wanted to know how they worked within the context of the movie.

I loved it, from beginning to end. I wasn’t sure what to expect even though I spoiled myself with the Wiki entry and parsing through the old comics by Ronald Searle.

I loved the little nods to Colin Firth’s turn as Mr. Darcy. Miss Fritton’s dog was named Mr. Darcy and after Colin’s character falls in a pond, he walks out with a wet, white, translucent t-shirt. Every Colin Firth movie is an allusion to other Colin Firth movies.

My feminist flag-waver was pleased to see how refreshing it was to see girls committing crimes rather than boys. We expect boys to be the masterminds of anarchy but the girls really took to their source material. Of course, if boys are committing anarchy and committed to a boarding school for fuck-ups, it would be a drama. But if it’s girls, we make light of it and do a comedy.

All in all, it was a lovely and whip-smart comedy.